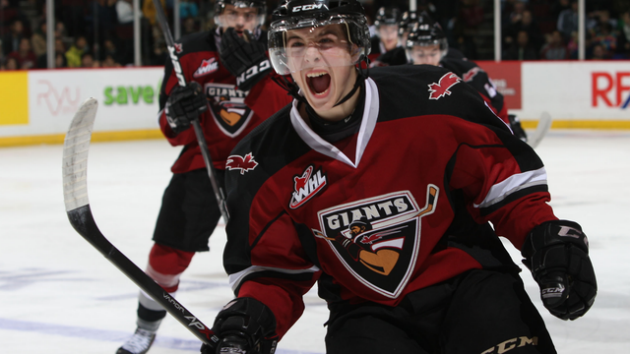 The 2017 draft has provided something for Rangers fans that we haven’t had in years: First round caliber prospects that are likely one year away from the NHL. It almost feels magical, a year after a draft we have two talented young centers that can push their way into having important roles on the big club.

With all that said, we still have other prospects that are trying to make names for themselves. Over the course of the season, I will be trying to give updates on a handful of prospects that may interest fans. It won’t be all of them, but more so the ones that are making waves over the week. If I don’t mention a prospect that you would really like talked about, I will read the comments of these posts every week and try to see if I can incorporate a name or two whenever I can.

Ty Ronning: Already becoming a fan favorite, it is hard not to like this kid. He does everything on the ice, hustles non stop and plays way above his 5’9 frame. Known more for his speed and forechecking, Ronning does a lot of dirty work around the front of the net and is commonly looked for to add some energy to his team.

Over the last few years the Vancouver Giants haven’t exactly been the epitome of success, but Ronning is hoping to change that. Over the first 12 games of the year, Ronning has been playing with former NYR prospect and a guy I have a soft spot for, Brad Morrison, and has 16 points. That’s right, our little agitator and sometimes jokingly referenced as the future captain has started to put up points, which was long overdue given the chances that he generated every game.

It is important not to get too excited about his production. Ronning didn’t suddenly become an elite scorer, he is in his 20 year old season in the WHL, so he is thankfully playing as expected. Being an elite scorer at this level is needed to keep being a legitimate NHL prospect. To pile on the good news, Ronning is also putting the important points up. He has 12 points at 5v5, 11 of them are primary (goals/first assists). Ronning is currently ranked 3rd among WHL forwards in Goals per 60 at 5v5, he’s also tied with NYI prospect Kieffer Bellows (drafted in round 1 of the same draft) in primary points per 60 at 5v5 as well. Ronning is playing for a contract and I think he is giving the Rangers a case to give him an entry level deal.

Patrik Virta: The last pick that the Rangers had in the 2017 draft. The reason for selecting this grinder is likely due to the draft being considered poor and the club wanting to take a more NHL ready player. Virta, who is 21, is showing the Rangers that maybe the time to come over to America is close. The buzz-saw center started the year off on a good note by being given an ‘A’. Virta also has been continuing his strong possession play from last year by being a 56.8% Corsi-For player, good for second on his team.

The offense started a bit slow for Virta, but he has recently started to add serious scoringto his strong defensive play, becoming a guy that the coaches can trust in every situation. He currently has 11 points in 15 games with a PDO of 101 (normal), he is shooting more this season and is reaping the benefits of it. A lot of people have him pegged as a Jesper Fast type player, and I don’t think that is a bad comparison at all. But the value in Virta can be that he is also a center. He is one of the best faceoff takers in the Finnish Elite League, and in my opinion has all the makings to be a fine bottom-six guy. The more offense he produces the more he forces the Rangers hand.

Nicklas Jensen: Yes… he does still count. Well at least to me. Jensen is an interesting story. Has he lived up to his first round potential? Absolutely not, but it can be argued that the Rangers maybe made a mistake in not signing him this summer. tThat said he may have also just personally left for the KHL by his own choice. In any case, scoring 32 goals on that horrible Hartford team should have resulted in his number being retired. Plus given the 11F/7D makeup of the team lately, he probably could have helped.

He is by no means a superstar, but he is still a fast skater, a big body, and has a shot that could be useful. C’est la vie. Now he is ranked 3rd on Jokerit in points. The KHL season ends at around February, but Jokerit likely goes far in the playoffs. Sometimes, teams bring in some help from the KHL for the NHL playoffs. Who knows, maybe we see a couple of games for Jensen if he keeps scoring as an early tryout for next season. Him scoring like this in the KHL to build upon his 32 goal season in the AHL is always great.

Tyler Nanne: This is more of an honorable mention. I’d like to tip my hat to Nanne as he has been 2 years removed from playing a competitive game and is now playing this season for the University of Minnesota. He is showing some serious will power in his journey back to hockey so all respect to him.

Tarmo Reunanen: This is not so much of an indictment on himself, but Reunanen is dealing with some problems in his current season. While starting off extremely bright, being a positive possession player for TPS, the offensive defenseman was getting a little unlucky in producing points. That is ok, he is a smart play-making defenseman that can skate out of trouble. His strong possession numbers suggested that he would sooner or later start producing.

Unfortunately, the Vancouver Canucks had the audacity in sending former 4th overall pick Olli Juolevi to TPS after the preseason and he has siphoned all of Reunanen’s ice time. No seriously, he is being Adam Clendening’d. He has been dressing for games but has played a whopping 0:00 minutes per game. Hopefully he can force his way into the lineup because his career up to this point has been a bit side tracked due to his injury.

Tyler Wall – After an incredible champion season, the goalie prospect seems to be off on a slow start. Unfortunately I have no means of watching his team so I can’t comment on his play but the stats thus far are concerning. With all of that said, He has had a history of being dominant and although repeating as a champ may be difficult I do believe he will turn his season around, potentially as early as next week.

Ryan Gropp – His offense hasn’t fully translated to the AHL yet. I am not his biggest fan but it would be wonderful to see the Michael Ryder copy start scoring more at the AHL level. When he has time he showed skill but it’d be great to seem him do things himself.

John Gilmour – Defense already suspect, Gilmour hasn’t been able to provide offense thus far this season. It is a bit early but if he wants to be kept in the same conversation as other prospects he needs to at the very least be a top point producing guy in the AHL.

Igor Shestyorkin is almost disqualified from these chats due to his ludicrous domination.