So what’s up with these Rangers? 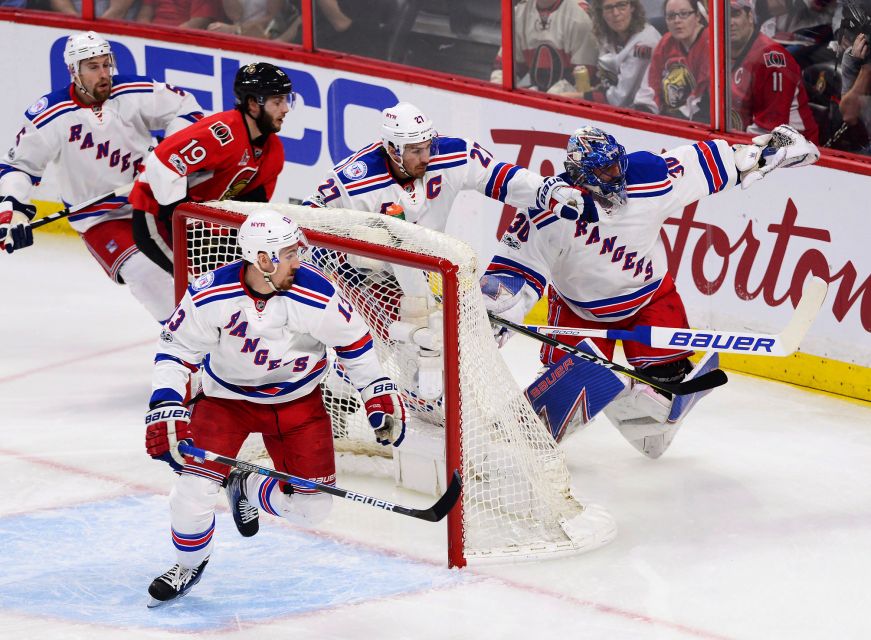 We’re now five games deep into the 2017-2018 regular season and the Rangers seem to be having issues winning hockey games. Now, of course this is the smallest of sample sizes, and not to put on my fortune teller hat but I guarantee you they’ll win more than one game this season, but it’s fair to say that there might be some issues with the team. Now you might recall just a week ago I was urging calm after the Rangers dropped their home opener, so how on Earth can I hold these two thoughts in my head at once? Well, in short, I think there’s a distinction to be made between the on-ice play of the team and the structural deficiencies this team displays (although obviously there’s a link – we’ll get to that later).

I still think, as I said last week after the home opener, that there’s not a lot we can tell about how this team will play based on how they’ve played so far. The sample size is just too small – Mika Zibanejad for instance is going to go cold at some point, Hank will have a bad game here and there, and guys who aren’t really making a huge impact right now are going to break out. Over the course of an 82 game season there are going to be ebbs and flows on pretty much every level, and we simply can’t read the tides based on five games’ play.

But there’s clearly issues with this team, there’s not doubt about that. What I’m going to posit here today is that what’s rotten in Denmark is stuff we already knew about, and are things that would be wrong with the team even if they weren’t playing a single game of hockey.

You see, this team is flawed just on paper. Sure, we made a significant defensive upgrade this offseason in signing Kevin Shattenkirk, Brendan Smith, and trading for Anthony DeAngelo. We’ve also got some forwards who are ready to take the next step, namely Pavel Buchnevich and Mika Zibanejad, in addition to our seasoned veterans like Chris Kreider (it will never not feel weird to say that). Still, we’re stuck with the same stubborn coach, we’re lacking another top-nine center, and we’ve still got two anchors on defense just waiting to screw up a fool proof top two pairings. These are significant flaws, that, in concert, can really mess up a good thing.

Let’s start with the Alain Vigneault, because he’s the biggest issue with this team right now. He’s already in some weird playoff hunt crunch time mode, proclaiming to the press “we’re just trying to win some hockey games”, which is a weird thing to say because while yes, we’re always just trying to win some hockey games the time for panic moves is a few months away. Well, he made those panic moves anyways, putting both Marc Staal and Nick Holden with Ryan McDonagh instead of Kevin Shattenkirk, at one point playing him on his offside. He’s juggled up the forward lines almost nightly (with the exception of the KZB line, which has shown already its excellence) and insists on playing Kevin Hayes in a shutdown role, despite Hayes’s demonstration of offensive prowess.

Last night against Columbus he made the bizarre choice to almost exclusively play the KZB line in defensive situations alongside McDonagh and Holden, while the fourth line got significant offensive zone time alongside Shattenkirk and Staal. While line changes are made on the fly and a lot of that had to do with each line’s play, it seems odd that you wouldn’t at least try to get your most offensively gifted line into the offensive zone for a little bit.

So Alain Vigneault is a crazy coach, what else is new? Well, as alluded to above, we’re lacking another top-nine center to play either the second or third line, with Mika Zibanejad and Kevin Hayes being the other two and David Desharnais holding things down on the fourth line. This is the kind of thing that other, more savvy coaches would find a way to work around, but instead AV has decided it means Kevin Hayes can play a shutdown role, something that hasn’t work and continues not to work. The Boston native is clearly one of the more gifted offensive players on the team, so why play him in an offensive role when you can rely on his biggest skill … his backchecking.

Similarly he’s flirted with the idea of playing Miller at center, but keeps juggling the lines to the point where we can’t really get an idea of what that might look like or who he might play best with. If only there were a series of games before the season started that didn’t count where you could experiment as much as you’d like. While I realize that Filip Chytil was at that time tearing it up, if that was such a factor you’d think it would make sense then to give him a chance as an offensive-minded center for longer than ten minutes total ice time.

Finally, we get to Nick Holden and Marc Staal, the other major structural issue that AV has decided to pick up and run with in an almost purposeful attempt to exacerbate this team’s issues instead of finding ways to minimize their impact on the team’s overall play. I’m not going to harp on their defensive issues, since we all know by now what they are as players, but I will say that it seems strange to shoehorn them into high-profile spots in the lineup instead of using, you know, those two heavily sought after free agent defensemen that Jeff Gorton went out an acquired this offseason. This defense was foolproof at the start of the season, and yet the fool at the helm managed a way around all of the easy solution laid out for him by the team’s management. Incredible.

Now, while I started off this post by making a distinction between the structural deficiencies of this team on paper and the way they have and may continue to play, I do think that there’s a link. Obviously a coaches lineup and deployment decisions are going to impact the on-ice product in that the team is going to play worse if it plays a significantly worse roster in awkward, counterintuitive situations. This may not always be the case however, as the Rangers nearly won last night on the back of Henrik Lundqvist, and guys may still play well despite not being suited for certain scenarios (see: Marc Staal’s fortuitous goal against Toronto in the comeback that wasn’t to be).

Still, it’s just plain logic that a team that is bad on paper will eventually be bad on the ice, and a team that creatively finds solutions to its structural issues will probably play better than the former. It may be hard to tell how a team is going to play on any given night, but in the long run, it’s fair to be concerned about the state of this team because over the course of an 82 game season a team with flaws like the Rangers’ is going to perform worse than they otherwise would without those deep seated issue. So while I’m still not panicking about their play, I am a little bit concerned about the state of the team more broadly. You should be too.