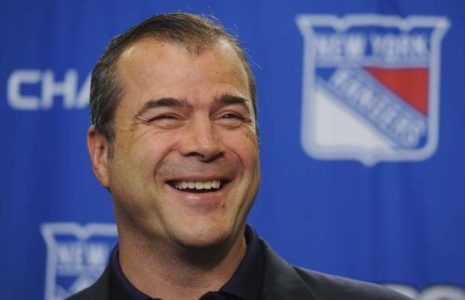 Happy Friday, BSB community!  I started writing this as a “thoughts” post, since it’s tough to do actual analysis at this stage of the season, with the sample size being so small.  My first thought started with Alain Vigneault, and just never really left that topic, so I guess this post is about the head coach now.  So, maybe it still is a “thoughts” post, just a “thoughts about Alain Vigneault” post.  Sorry about that.  I hope you enjoy.

This season has a very small sample size of data to this point, but for the head coach, we have four seasons worth of data to draw from.  I think, and I’m going into speculation mode here, that we ended up feeling a little bait and switched from what our initial expectations of what his coaching philosophies were.  Remember when Torts was let go and we were sold on Vigneault based on his “progressive” approach to data and matchups?  He tried to leverage zone starts and seemed to be more open-minded to data-driven deployment, so we all felt that we were getting a “Moneyball”-type coach who would maximize the information available to try to gain an edge.

From the data we have over his tenure in New York, he clearly leans on an old-school philosophy that each defensive pair needs a “shutdown guy” to go with any riskier puck-moving-type defenseman.  From what I have observed, this extends to other facets of the game, as well.  However, it manifests itself in different ways.  For example, it seems that he feels that a hybrid-overload system in both the offensive and defensive zones are the only real way to gain the systemic advantage.  Otherwise, why not adapt the system when your players are clearly struggling to implement it year after year?  I think for all our hand-wringing, he is a combination of new and old school that tends to frustrate both camps.

That said, I believe he has a tendency to get too cute with his lineup decisions in an attempt to find lightning in a bottle.  It would be easy to hypothesize that he needs to be the smartest guy in the room and say “look, I took a washed up Marc Staal and paired him with journeyman Steven Kampfer and created a shutdown pair that no one else would have put together”.  However, I don’t necessarily think that is what is going on.  I think like any veteran professional working in a changing environment, he is not comfortable putting all of his eggs in the analytics basket and trusting the results coming from the pretty obvious combinations that possession stats recommend.  He clearly still believes in the human element of coaching decisions; lineup chemistry, veteran leadership and all that.  He gets nervous when a Tony DeAngelo-type throws caution to the wind on a pinch or tries a zone exit to lead the rush.

This has been compounded by a number of front office decisions that have lead to a strange mix of players for AV to tinker with.  Clearly, with Filip Chytil struggling to start the season, the Rangers’ forward depth has been further compromised.  I know that the return of Jesper Fast will lengthen the lineup a bit, but I don’t think any of us concerned about losing Derek Stepan’s production or consistency in the top-6 have any reason to feel any better.  I certainly applaud Jeff Gorton’s work in re-tooling the blue line, but it’s kind of like a guy who fixes an engine, gets it running, and leaves the floor of the garage covered in spare parts and tools.  I understand you want to have depth in this league, but when the front office objective was to add mobility, speed and youth to the blue line, why are you keeping Staal, Holden and Kampfer around when you know AV feels more comfortable with guys like that in the lineup? When the chips are down, AV has shown himself to be risk adverse (to the extent he believes his lineup stalwarts are less risky, for right or for wrong).

Personally, I am to the point where I see someone managing not to screw up, rather than to succeed.  There are too many players on the team that he doesn’t trust, and as a result, he is leaning on the wrong guys.  Until the deployment is fixed, we can’t objectively judge the state of Henrik Lundqvist’s game, either.  I know, I know, we can see performance and all that and make observations from it.  Speaking as a goaltender, however, when you feel like dangerous opportunities can come from multiple places on the ice during a single play, you hedge.  It’s just a fact.  It’s not good, and it’s not the optimal response, but if a goaltender is hedging and getting caught between options on the play, it tells us nothing about whether his skills are eroding or whether can continue to play a high-level.

At 1-3-0, there is certainly plenty of time to let the organization work out the struggles to start the season.  However, Jeff Gorton needs to be actively looking for another center and a trade for Nick Holden.  Vigneault needs to accept the reality that the blue line is now populated with guys who can move the puck, which may not sit well with his defensive philosophy, but it necessary to succeed in the NHL today.  Hopefully, things will mesh as they did in 2014-2015, but there is still work left to be done.  On the plus side, at least the power play looks good.