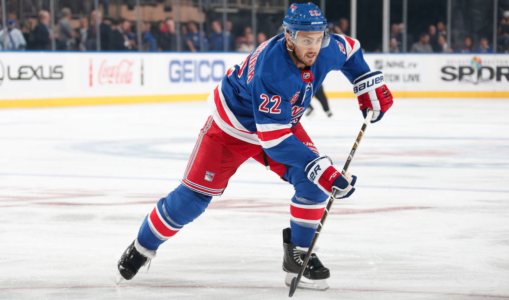 Friends, it’s finally that time of year again. Regular season hockey is upon us, and boy does it feel good. Except depending on your persuasion, you may not agree with that because the Rangers did in fact drop their home opener against one of the worst teams in the league, the Colorado Avalanche. What I’m here to tell you is this: worry not, because it’s only one game, and even if that still does matter to you, there’s no reason to worry. Allow me to explain.

First, it’s important for me to say up front that I don’t believe you can really tell much about a team after the first game, and maybe even the first 5-10. It’s an 82 game season plus playoffs; there’s plenty more hockey to be played just as a matter of numbers. Going beyond that, guys are rusty, many members of the team have never played with one another before, and even though we did get to see some guys display their skills in the preseason, it takes some time to click. You might say that the New York Rangers are professionals and these things shouldn’t be issues for them but let’s be honest, they’re human. Rome wasn’t built in a day, and truly exciting hockey certainly won’t be either.

It’s also worth noting that although last year the Rangers triumphed over the Islanders in their home opener, the year before they lost to a legitimately terrible Leafs team (still tanking for Matthews at that point), and the year they went to the Stanley Cup Final they lost the first several of their games by wide margins on the road (I still have flashbacks of Radim Vrbata totally owning in game 2 or 3 on the road in Arizona). All of this is to say that while the Rangers have won exactly 0% of their games so far, it’s not going to stay that way, so why worry?

But let’s say the first game does matter to you. Let’s say you either want or need to draw some kind of conclusions based on exactly 60 minutes of hockey. If that’s the case then boy do I have some good news for you: the Rangers actually played a pretty good game on Thursday night, both in terms of team play and individual performances.

Let’s start with the big one: Kevin Shattenkirk looked good. Like, really good. Maybe that’s not super apparent if you’re focused on the fact that he was a minus 3 (but please also consider that plus/minus is maybe not the best stat for evaluating pretty much anyone) but in terms of the small stuff it was as advertised. In the first period alone he made some slick defensive plays, deftly redirecting the puck out of the defensive zone and into more profitable areas of the ice with seemingly little effort. Throughout the game he was making smart passes, often putting himself in a position where he had options and making smart choices on how and when to make a play. He knew when to push the pace, he knew when to back off, and he showed signs of chemistry with his new defensive partner, Ryan McDonagh.

There were other bright spots as well, up and down the lineup. Pavel Buchnevich was commanding in the offensive zone, particularly on the power play, where he dictated the ebb and flow of the play with his on and off the puck movements. When opponents are repositioning themselves defensively in anticipation of what you’re going to do, and when teammates are finding themselves in scoring positions as a result of your playmaking, you’re having a positive impact on the ice. It’s good to see from a guy who needs to have a big year and who showed great potential last go around in an unfortunately truncated rookie season for him.

David Desharnais and Jimmy Vesey looked quite good defensively as well, making responsible plays in their own end and giving the d-men the kind of puck support they needed to prevent scoring chances and get the puck out of the zone as quickly as possible. Although not every play was fruitful, particularly in the generally choppy and disjointed second period, for the most part the Rangers depth stepped up on Thursday night.

Statistically the game was a success as well: the Rangers had 39 shots on goal, a 61.06% share of all shot attempts throughout the evening and an xG of 4.43 to Colorado’s 3.64 (stats via corsica.hockey). For those unfamiliar with xG it’s a metric designed to represent how likely a shot is to go into the net, based on previous shots from similar areas, shot type, and various other factors. Think Steve Valiquette’s video approach where he rates a shot’s likelihood as 1 in 3 if it’s a shot off a slot line pass and what have you, except it’s tracked and computed automatically instead of by Vally’s small army of game trackers (which is awesome in its own right, much love to Valiquette). Most coaches have their own way of analyzing whether or not their team got the right looks regardless of end result, and whatever AV’s is, by both the most simple and advanced metrics we have available, the Rangers should have won that game. They were simply unlucky.

So while you might be inclined to believe that Rangers bloggers are all unsparingly negative and use stats to bludgeon guys to death over their defensive deficiencies know this: the numbers paint a much prettier picture than the one we saw on the scoreboard as the clock wound down on Thursday. Beyond that, for the “watch the games” crowd, if you were watching the game carefully, picking out guys’ fundamentals and making sense of what the Rangers were trying to, you’d realize that when this team clicks it’s going to make some noise in the East, despite premature reports of the Rangers’ demise. Besides all of that, it’s only the first game. Don’t fret.