Pavel Buchnevich needs to build on his rookie year 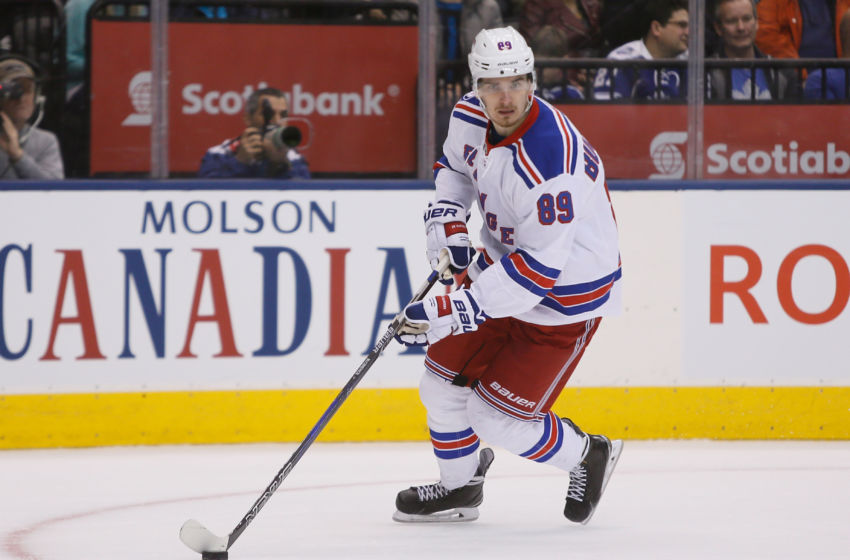 There are so many intriguing aspects to watch out for on the 2017-18 Rangers that makes this a truly fascinating season. One of the most critical for me, is watching how Pavel Buchnevich develops this season. Amid reports of his better conditioning, the impressive pre-season play and the positive soundbites hailing from Alain Vigneault, it appears Buchnevich is primed for a breakout campaign. If he does indeed take his game to the next level it couldn’t be better timed. He’d make Jeff Gorton look like a genius for starters (centers? Who needs centers! Pah! Enjoy the desert Derek!)

While Buchnevich is obviously no center (and as such not a replacement for Derek Stepan – who will be missed, even if he can be replaced) if the Rangers can get more consistency and development from Buchnevich, as well as Jimmy Vesey and a solid rookie campaign from Filip Chytil, then the Rangers are all of a sudden legitimately three lines deep.

Buchnevich developing into a 40-50-point player in his second year would be huge for the Rangers and it’s also well within his reach if the reports of his pre-season are true. The Rangers are stacked on the wing and arguably have seven wingers fighting for regular top nine minutes (Nash, Zuccarello, Buchnevich, Kreider, Miller, Vesey, Grabner) so how Buch get’s used by Vigneault will be a fascinating early season storyline.

How Buchnevich (and Vesey) develops early on, potentially impacts the Rangers entire season and beyond. If they play well and the Rangers are subsequently in a strong position midseason, the team can deal from a position of depth to address other needs (a rental center for a playoff run?).

If Buchnevich (and the other kids) do play well, it is certainly much easier – and palatable – for the Rangers to move on from veterans such as Rick Nash and Michael Grabner and use their cap allocation elsewhere (more on that shortly). If the kids play well, at worst, the Rangers are in a stronger negotiating position if they are interested in retaining and extending the two older Ranger wingers.

If Buch, Vesey and Chytil falter however and the Rangers entire approach to the season and how they manage the forward group changes. The Rangers know what they have in JT Miller, Kevin Hayes and Chris Kreider. In the trio of Americans, they have three top six forwards with some room for growth but all three have already established solid NHL floors. They know what they have with depth guys such as Jesper Fast. What they do not quite know just yet however is what Buchnevich can truly be at the NHL level and what the fallout of his development (or lack of) will be.

What makes Buchnevich’s progression even more fascinating is that he is cost controlled for the foreseeable future. Including the 2017-18 season, the tall Russian has two more years on his entry level deal and the Rangers could have themselves a bargain for a handful of years even if they overspend to extend him and lock him down if he’s successful (as is the trend in the modern NHL).

Given the likely cost of retaining Ryan McDonagh (whose contract expires when Buchnevich’s ELC does, and who will cost in excess of 7m to keep in Manhattan) any cap bargains the Rangers can have in meaningful positions will go a long way to ensuring the Rangers stay competitive in a brutal division that hasn’t got easier recently.

So while we’re all giddy with excitement for Kevin Shattenkirk’s Broadway debut, while we are buzzing with anticipation at Filip Chytil being the next great rookie hope to hit the Garden ice and we all cover our eyes in fear when Marc Staal jumps over the boards to shadow Sidney Crosby, it maybe Pavel Buchnevich we should be watching closest. His season may be one of the most important amongst all Rangers this season. I’ll be watching number 89 very closely.