What we’ve learned from training camp so far 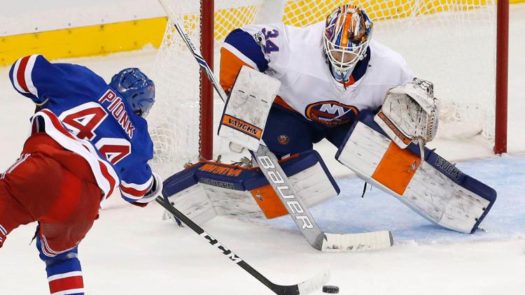 When was the last time you saw a Ranger D-man make a move like this? (Credit: Noah K. Murray-USA TODAY Sports)

Jeff Gorton is not blind to the hole at center
Gorton was very careful with his wording in response to reporters’ questions about attempted deals for help at center over the course of the summer. Though nothing materialized, it’s clear that Gorton has been active in conversations. But he’s also willing to be patient. When camp opened Alain Vigneault said he wants to see J.T. Miller at center because he’ll be needed there “at some point.” AV also indicated that both Lias Andersson and Filip Chytil have a real chance at making the team. It’s up to all three of those players to prove their merit and take the pressure off Gorton. But for the time being, it seems that Gorton is willing to let things play out.

Trading for Matt Duchene makes all kinds of sense for the Rangers, but not so much for the Avs
Josh wondered aloud the other day about the absence of trade rumors between Colorado and New York given the Blueshirts’ glaring need and the availability of such an obvious solution in Duchene. Gorton has surely conversed with Colorado GM Joe Sakic, but there still doesn’t appear to be a trade match between the two clubs. It’s widely known the Avs are seeking a blue chip young defender and the likes of Ryan Murray, Cody Ceci, Thomas Chabot, Justin Faulk and Noah Hanifin have circulated through the rumor mill as potential building blocks from known interested parties.

New York has one young defender of that caliber – Brady Skjei – and he’s about as untouchable as it gets. And without his inclusion, it’s difficult to see how the Blueshirts could cobble together an offer that rivals what’s already on the table – even if Sakic is starting to feel the heat of opening night and must lower his demands slightly to complete a swap. Tony DeAngelo would be the one other player that carries similar potential, but it’s tough to envision New York moving him again during the same offseason he was acquired – or Colorado being interested in gambling on DeAngelo when the Avs so desperately need a clear win to rejuvenate their franchise. And despite a strong showing thus far, Neal Pionk doesn’t carry that type of value and it would set a poor precedent for the Rangers to beat out other clubs for a coveted college free agent only to ship him out of town a few months later. Certainly pairing Kevin Hayes with DeAngelo, Pionk, or Sean Day might make things interesting from Colorado’s perspective, but moving Hayes would leave the Blueshirts still in need of another center, in addition to the aforementioned issues. Landing Duchene would be swell, but it’s still a real long shot.

The Rangers have D-men that can skate AND move the puck!
And we haven’t even seen Kevin Shattenkirk in action yet! Seriously, it suddenly feels that the Blueshirts went from having one of the least mobile defenses in the league to having an embarrassment of riches. Skjei and Ryan McDonagh were the lone weapons a year ago, but now they’re joined by Shattenkirk – who’s among the league’s elite puck movers and power play quarterbacks, PLUS young guns DeAngelo and Pionk that both shined in their preseason debuts. DeAngelo showed no hesitation to join the rush on Monday – nearly finishing a nice deke in tight – in addition to directing traffic atop the power play. And Pionk delivered a highlight reel spin-o-rama game winner after consistently pushing the pace during regulation. Pionk’s path may be blocked in the short term, but it may not be a bad thing to give him a year – or part of a year – to adjust to the physicality of the pro game. Regardless, the Blueshirts are suddenly rife with blueliners that can both skate the puck to safety themselves and efficiently move it up ice to the forwards.

Alain Vigneault is turning the page
OK – this might be premature after a single exhibition game. But Vigneault didn’t mince words when evaluating Marc Staal’s standing on the team and set high expectations for youngsters across the board to embrace bigger roles. Sure, plenty of that is coach-speak – it’s not like Staal is actually going anywhere – but the bench boss sure seems like he’s taken the summer to consider where the Blueshirts have been and where they’re going and realizes it’s time to commit to the next wave of Rangers. Vigneault doesn’t have a ton of choice in the matter, so he’s wise to get out ahead of the brewing narrative and lead the new direction of the team.

Rick Nash is ready to rock
For my money the 2016-2017 season was Nash’s best as a Ranger. He was a bulldog on a nightly basis, consistently driving the net and creating offense in addition to his usual top-notch defensive work. And if anything, Nash seems to have found even more motivation in a contract year. This is a very proud player that has always taken it personally when he doesn’t put the puck in the net and Nash seems equally driven to prove that he has plenty left in the tank as he looks ahead to the next chapter of his career.

Gabriel Fontaine and Ryan Gropp stocks are trending up
It’s probably not a coincidence that after Fontaine impressed at Traverse City and the Blueshirts decided to put Miller at center, Fontaine got an early look in the preseason. There’s suddenly a spot or two to be won among the bottom-six wingers and Fontaine brings a responsible pro-style game to the table. He has an uphill battle ahead of him, but Fontaine might be this year’s dark horse to make the roster.

Similarly, Gropp’s development has been bumpy to this point and he’d become something of a forgotten man, but he seems to have made significant strides over the offseason. Gropp will be in the spotlight tonight playing alongside Andersson and Chris Kreider and has a real opportunity to impress the staff.

On the flip side, Robin Kovacs was one of the eye-openers at camp last year, but he was among the first cuts this time around. After a miserable season in Hartford, Kovacs doesn’t seem likely to have a future with the organization. Likewise, Boo Nieves has done little to set himself apart from the pack and may have already seen his chance come and go.