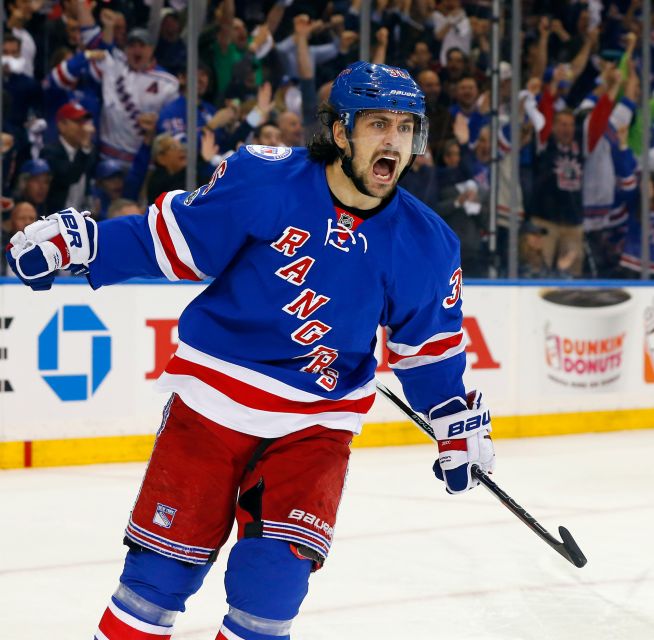 The Rangers made major moves this offseason, not only shedding salary and getting younger, but parting ways with two member of the leadership core. Dan Girardi was bought out, and Derek Stepan was traded to Arizona, leaving just Rick Nash and Marc Staal with ‘A’s on their jerseys. Both of their futures are questionable as well.

Alain Vigneault has hinted that he is unsure if the Rangers will go with four ‘A’s again next season, or just stick with Nash and Staal. Letters are more recognition that a player is a leader in the locker room, but you don’t need a letter to be a leader. Just look at Henrik Lundqvist, who’s a powerful and respected voice in the locker room.

Regardless of letters, the Rangers have a leadership void that will need to be filled. Veterans will need to guide kids as they get accustomed to New York and the rigors of the NHL. Kids will turn to veterans and long-tenured Rangers for guidance. It is a shift in leadership for the new-look Rangers.

Mats Zuccarello is likely going to be leaned on to fill part of the void. He’s been with the club a while, and he’s a very skilled and heady player. Ditto Chris Kreider.

But it goes beyond the longest tenured players. Kevin Hayes will be leaned on to mature and grow. Same with JT Miller. Brendan Smith will have a leadership role with his new four year deal. Kevin Shattenkirk, although new to the team, is a veteran who knows what it takes.

Filling leadership voids isn’t just about replacing two departed alternate captains with two more. It’s about growth as a team and taking that next step. It’s a collective team effort. Even if no new ‘A’s are given, the Rangers will need to replace those voices in the locker room.