Some quick thoughts before the pre-season opener 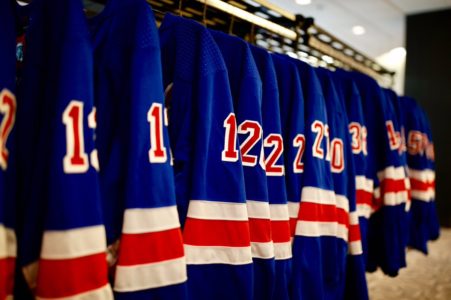 After a long and arduous offseason, the Rangers finally kick things off on the 2017-2018 season on Monday against the Islanders.  There has obviously been a ton of coverage over the summer on the Blueshirts’ moves and non-moves, but as the season approaches, I have some thoughts…

1. I know everyone keeps waiting for the other shoe to drop on Nick Holden, but with Vegas more or less a sure thing to drop a couple of NHL capable d-men through waivers in the coming weeks, I think defense needy teams who would otherwise be in on Holden are playing the waiting game. It’s a viable strategy, and those who are left without a seat when the music stops might make a desperation play for oft-maligned defensemen, but I am trying to grasp the reality that he will be a member of the blue line for this coming season.

2. That said, I hope his role is appropriately marginalized with the reinforcements that Jeff Gorton has brought in over the summer. AV had some harsh words for Marc Staal yesterday, but we know his track record with veterans he trusts. It will be a frustrating thing to spend all season writing about how angry we all are about Tony DeAngelo rotting in the press box while Holden logs twenty minutes a night.

3. I am profoundly disappointed in the Rangers’ PTO activities this year. Not necessarily because I’m angry about the guys they brought in, but because there are still so many attractive PTO candidates sitting out there that they are ignoring.  If you want to tell me that Jaromir Jagr isn’t a good fit because he is too slow for the system AV employs, fine, but don’t tell me that there aren’t good candidates out there to take a shot at adding some forward depth with no risk.

4. Speaking of forward depth, it scares the hell out of me that it seems the organization is actually expecting Lias Andersson to make the team out of a camp and contribute in a meaningful way at eighteen. I know that the aging curve for forwards is trending down, but teenage success is generally reserved for elite talent.  I’ve heard nothing but good things about Andersson, but I would love to give him a month or two in Hartford to acclimate and hopefully dominate before turning him loose on the NHL.

5. I’m rooting to Tanner Glass to succeed out in Calgary. He is by all accounts a great guy and the type of player that the rest of the team likes to have in the room.  It’s not nothing to feel like a teammate always has your back and will do anything it takes to win.  I’ve played with guys whose skill was never where it needed to be for the team, but we loved those guys because of who they were.  From an organizational standpoint, though, that doesn’t cut it.  I wish him well, but I am glad he is another organization’s problem at this point.  Hopefully, this is the last time I ever have to write about Tanner Glass.

6. This may sound sacrilegious, but I’m still not thrilled with the Ondrej Pavelec signing. I trust that Benoit Allaire can take his existing talent and make it thrive.  I don’t trust that Pavelec will actually let him do it.  It’s a good thing I would bank on a bounce back year from Lundqvist, because I think Pavelec will be a massive downgrade on the performances of Cam Talbot and Antti Raanta the past few seasons.  I do oddly like his bucket this year, even if it appears to be sans Springsteen.

7. Looking at the training camp roster, there isn’t as much filler as I expected. Sure, there are warm bodies to fill out practice groups and to spread out game action, but the majority of guys in camp are guys that the organization seems to feel have a future.  Now, this is qualified a little bit by the fact that the Rangers have a very shallow farm system at the moment, so a lot of these guys will probably never make an impact at the NHL level, but I am interested to see many of these younger players, first hand.

8. I’ll be honest, I dig the Adidas jerseys. Especially the practice ones.  Like the soccer kits, they add some texture and sleekness to normally bulky sweaters.  Obviously, the Rangers jersey will never really change that much, but I’m hoping for a really interesting Winter Classic edition this season.

9. Congratulations to Jeff Brown, the winner of our 2017 Offseason Plan Contest. Jeff prevailed by the slimmest of margins, but that is more a testament to the quality of the submissions.  Be on the lookout for a guest post from Jeff in the near future.

That’s it for me this week.  Everyone enjoy the weekend, because Rangers hockey is just around the corner!