Three predictions for the Rangers this season 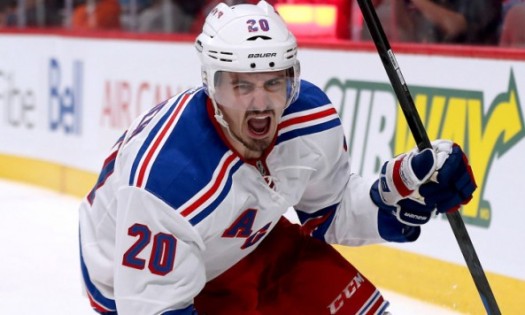 Has Chris Kreider even been more important than this coming season?

It’s been quite some time since I last wrote for the blog, but with personal things out of the way (amongst other things, work sucks doesn’t it?!….), the new season just around the corner and significant change in Rangerland behind us, now seems a good a time to get back involved. So, please accept my apologies that you will once again have to endure my ramblings.

Usually I fly over from the UK around mid-season for my annual Rangers fix, but this time I’ll be heading over for my first ever opening night Rangers game and I’m absolutely pumped. Here are three things I’m expecting from the upcoming regular season.

Kreider’s path to his first thirty goal season – and status as an elite goalscorer – has never been clearer. With JT Miller tentatively(?) pencilled in at center, Kreider is clearly the Rangers go-to left wing option and he’ll need to produce consistently if the Rangers are going to ease into the playoffs.

The Rangers have solid depth at Kreider’s position with more expected from sophomore Jimmy Vesey, while the Rangers benefit from several wingers that can play both sides (Nash, Zuccarello, Grabner and Buchnevich among others) but Kreider is a fixture in the top six.

Kreider is also critical to a powerplay (2nd in goals among returning players, while only second to Zuccarello in PP ice-time among forwards) that should only improve with new addition Kevin Shattenkirk manning the point, as well as the potential upside of Anthony DeAngelo and his puck moving ability.

Kreider is unlikely to shoot above 15% again, but if he stays healthy then thirty plus goals is absolutely within reach. Despite missing seven games last year Kreider still potted twenty-eight goals while establishing career highs in shots and in overall ice time/game. Given the significant injuries sustained to Nash, Zibanejad and Buchnevich (among others) the Rangers have never relied on Kreider more than they did last season and yet he’s likely to be even more important this season given the changes up front and the apparent lack of depth outside the top six.

Only twenty-six players scored thirty+ goals last season. ‘Just’ six more goals this upcoming season and, based on last season, Kreider would break into the league’s top ten in goals scored. Kreider doesn’t seem to be considered among the league’s best goal scorers but he’s very close to making that jump. I think this is the season that Kreider truly breaks through, making that contract look even more team friendly.

Among all returning Rangers, maybe it’s our captain that should be most excited about the upcoming season. He’ll no longer have to drag Dan Girardi around the ice (hurrah!), he’s got a legitimate supporting cast on the blueline and if the powerplay improves, McDonagh stands to benefit as well, only boosting his own numbers.

Including a return to form for Henrik Lundqvist, the Rangers should be better defensively by default. An improved defense should alleviate some of the pressure on the Rangers captain as he won’t need to do it all, and the unit’s improvement should improve all his numbers, across the board. Even factoring in the additions of DeAngelo but above all Kevin Shattenkirk, McDonagh should still see plenty of powerplay time. All in all, there’s no reason McDonagh cannot rack up his first fifty point season.

Only nine defensemen scored fifty plus points last year, one of which (Shattenkirk) will now likely be his regular partner. McDonagh enters the new season primed to be among the league’s best blueliners again and has a great chance of generating more offense given the likely improved puck possession and breakout ability from Rangers blueline.

Given he was 17th in Norris voting last year, when McDonagh (almost) singlehandedly ran the tire fire that was the Rangers blueline, if he puts up a fifty(ish) point season and has strong advanced stats then a climb up the Norris voting awaits. If the Rangers, as a collective, have a strong regular season McDonagh figures to benefit individually.

All of the fifty-point blueliners were in the top fifteen in Norris voting. Of the blueliners that scored 53+ points, only Shattenkirk was outside the top four in votes. While points are not sole measure of an elite defenseman, if McDonagh plays the full schedule (granted, something he has only ever done once) he can easily jump into the league’s top five.

With just two years before he’s due a fat new deal, there’s plenty of motivation for McDonagh to grab the league wide (and media) respect and attention he already enjoys from Rangers fans.

The end of the Marc Staal era

It appears the Rangers have started to realise what a successful NHL defense needs to look like. It’s why Dan Girardi now resides in Tampa and it’s why the team went out and acquired Kevin Shattenkirk, Anthony DeAngelo and again went down the college route to get a puck moving blueline prospect such as Neal Pionk, among others.

Thanks to cap constraints, the Rangers (despite the fanbase’s hopes and desires) were never realistically going to get rid of Girardi and Marc Staal in one offseason. Given his contract, Staal will certainly be dressed come opening night but what we need and want to see is Staal relied on less, his ice time reduced, and over the course of the season Staal slowly but surely phased out.

The best-case Rangers scenario is this: Shattenkirk and DeAngelo establish themselves, Brendan Smith and Brady Skjei build on the relationship they discovered last season, all the while Pionk, Bereglazov, Ryan Graves and Sean Day play so well in the minors that one or two (or ideally, all!) of them force the Rangers into ridding themselves of Staal. How does this best-case scenario finish? Staal plays well enough and often enough to have some form of value either at the deadline or, more realistically, the Rangers can move him next summer instead of buying him out.

Staal has been a loyal Ranger, robbed of a better career by injuries, but in the right situation he can likely do a job in a limited, sheltered role for the next one to two years. The job however cannot be in New York.