This summer, The Hockey News has embarked on a noble quest to predict how teams’ rosters will look entering the 2019-2020 season.

To keep things simple no external free agents or trade acquisitions were taken into account, so this is an incomplete picture – but it’s still a fascinating exercise. Here’s what THN came up with for the Blueshirts: 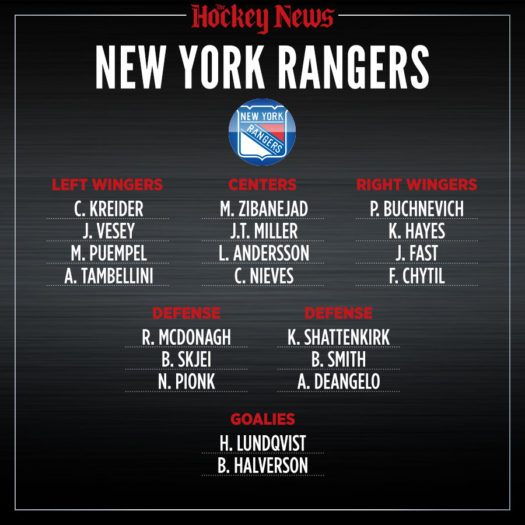 A few thoughts right off the bat:

– Puempel, Nieves and Tambellini are likely only listed because no one outside the organization was taken into consideration. Perhaps one of them will nail down a job, but those spots seem most likely to change.

– Larry Brooks raised the question of McDonagh’s future in New York earlier in the summer, and I’m becoming more convinced that he’s not a lock to get a new contract when McDonagh becomes a free agent after next season. If the Ryan Callahan trade had never happened, I’d probably be scoffing at the notion the Blueshirts would even consider letting their captain walk. But with McDonagh potentially in line for a contract in excess of $7 million annually, things could become pretty tight for the Rangers against the cap.

– That, and it almost seems like the team has stumbled into a contingency plan already. Sure a lot of the moves this summer were simply for needed organizational depth and the Kevin Shattenkirk signing might have been an unexpected gift, but it now seems like there’s going to be a logjam on defense in short order. Shattenkirk, Skjei and Smith are givens and guys like DeAngelo and Sean Day – at the very least – seem like they’re a part of the team’s future plans. Pionk, Alexei Bereglazov and Ryan Graves could also be in the mix and there are a host of wild cards including Sergey Zborovskiy and Vince Pedrie behind them. Certainly most of those guys can’t hold a candle to McDonagh in terms of ability, but it still seems like there are going to more bodies than there are spots. A lot will depend on Skjei’s evolution, but it’s feasible that he and Shattenkirk could become the top pairing in a couple years time.

– Obviously Lundqvist will still be under contract and would be leaving a ton of money on the table if he decided to retire. But Lundqvist also strikes me as a guy that has interests off the ice and will be tortured if he can’t perform at his expected level. I can’t picture Lundqvist ever putting on another sweater – so I think it comes down to the question of whether he’d be amenable to a time-share with one of the organization’s up-and-comers.

In building my own ghost lineup I quickly realized why THN avoided trying to predict player movement around the league. There are just way too many dominoes to take into account, but I ignored the restrictions and came up with this as my dart throw attempt:

Obviously, you’ll notice that I only included one addition from outside the organization, Max Pacioretty. He’ll be a free agent after next season the same as McDonagh, and going with my earlier line of reasoning, I think the Blueshirts might be more in need of scoring help than a defender at that point in time. Pacioretty will be 30 years old in the summer of 2019 and still realistically have a few years of strong production ahead of him. And like Shattenkirk, he’s never made a secret of his lifelong adoration for the Blueshirts. He’d likely be a good deal cheaper than McDonagh and might help re-balance the lineup.

Other than that, I took the easy way out and filled the roster from within. You’ll notice big names like McDonagh, Marc Staal, Rick Nash and Mats Zuccarello are missing from this lineup. I figure that most of the turnover will come from the older veterans that will hit free agency seeking one more big contract, while the Blueshirts will continue to replenish from within and re-sign their homegrown guys.

I’m also skeptical that Hayes will still be around. With Zibanejad inking an extension this summer and Andersson and Chytil on the way, I think Hayes might become a little too expensive and a little more expendable. But as with Skjei and McDonagh, the progression of Andersson and Chytil might dictate New York’s desire to keep Hayes.

So that’s it! I’m sure my roster will be nowhere close to accurate, but trust me – this was hard to figure out. Please comment below with your own roster and thoughts!