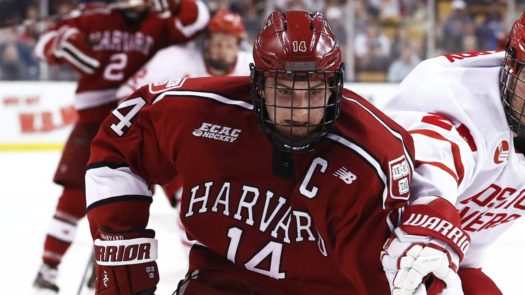 – Though there are mixed opinions of Alex Kerfoot’s pro potential, landing him would still be a coup for the Blueshirts. I’m very uneasy about the pressure on Lias Andersson entering training camp. Heck even David Desharnais is far from a sure thing. Bringing Kerfoot into the mix would be a very nice insurance policy and create a healthy competition.

– It’s almost comical to see the difference in the offseason between the NHL and NBA. While only the most rabid Ranger fans are still refreshing Twitter for Kerfoot updates, the world exploded when the Kyrie Irving blockbuster went down last night out of nowhere. I think there are pros and cons to both situations. On the one hand, I’d love it if my sport were discussed 24/7 across society and the excitement was this high even in August, which is normally such a dead period. But on the other, I don’t necessarily mind a month or two each year to take a break from the action before I get completely sucked in all over again.

And while I’m in awe of the way basketball has marketed its players – to the point that even a passive fan like myself that hasn’t watched a full non-playoff game in ages is still following rumors with great interest – there’s a lot to be said for the loyalty of hockey teams that often keep their cores together for an extended period. There’s literally no one that’s safe in the NBA, which is entertaining, no doubt. But while I always will support the Blueshirts above all else, I’m rooting pretty hard for mainstays like Henrik Lundqvist, Ryan McDonagh, Marc Staal, Chris Kreider, and so on to get the rings they’ve worked so hard for.

– Last point on Kerfoot: I’m once again counting my lucky stars to be a Ranger fan. Whether he actually ends up on Broadway or not, this is approximately the billionth example of how uniquely positioned the Rangers are to land talent. Every club has its own selling points, but I really can’t think of a single one that can match the Blueshirts. Check out this list of perks:

1) They’re located in the world’s most prestigious city, with endless nightlife, entertainment and dining.

2) The city is so big that players can go about their lives without being mobbed, but there are also plenty of diehard fans that pack the arena every night.

3) The Rangers have well established pipelines to other hubs like Boston, Minnesota and Wisconsin, which consistently churn out talent.

4) New York has endless financial resources that allows them to brush mistakes under the rug and double down on a new round of imported players year after year.

5) They can woo potential newcomers with a jaw-dropping display of the lavish lifestyle, as displayed by the private helicopter sent to retrieve Keith Yandle and the numerous glowing reports about their facilities and mouth-watering spreads.

6) The Rangers are an Original Six club with a storied history, sleek sweaters and wonderful treatment of alumni.

7) The team has been in the playoff mix for over a decade. Management has demonstrated a commitment to winning year after year, so there’s no concern that you’ll be stuck in a rebuild.

I mean, what more could you really want?

– I’ve think Jesper Fast has the best chance of being this season’s Michael Grabner – a guy that comes out of nowhere to become a huge offensive contributor. Since it can’t be someone that’s already established, the candidates boil down to Fast, Andersson, Desharnais, Matt Puempel, Boo Nieves or another prospect or training camp invite. Slim pickings, but Fast has always had good hand-eye coordination and goes hard to the net. I could see the stars aligning and him randomly potting 20 goals.

– On the note of roster dark horses – there’s really only one that comes to mind: Adam Tambellini. Tambellini hasn’t done much to warrant consideration, but there’s also not much in front of him. Desharnais is a given, but Nieves and Andersson sure aren’t. If the Rangers aren’t 100% certain that Andersson is ready for the show, then they’d be wise to let him grow for another year – and that’s not an unrealistic scenario. So barring a PTO or another late acquisition, it would be Nieves job. And like Tambellini, he hasn’t done much to this point to give confidence that he’ll win the job outright. So with a strong camp, maybe Tambellini comes out of nowhere? I know many of you are eager to see Steven Fogarty, but I’m very skeptical he’s going to make it to the show.

—
Question time:
1) What are your thoughts on the pros and cons between the NBA and NHL?
2) Who do you think might come out of nowhere to have a big year?
3) Who is your training camp dark horse?