If not Joe Thornton, then who? 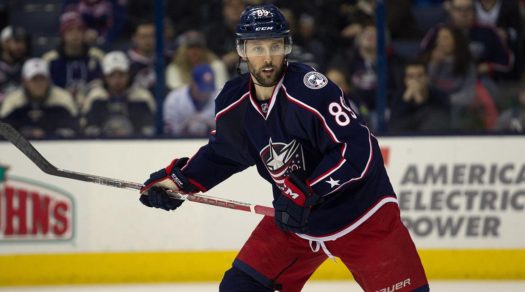 At the draft GM Jeff Gorton expressed his comfort with having Mika Zibanejad and Kevin Hayes as his one-two punch down the middle – and whether you take that at face value or not, the Rangers have a gaping hole to fill at center in the wake of the Derek Stepan trade.

The most attractive solution is to sign Joe Thornton, the surefire Hall of Famer that has anchored San Jose’s top line for over a decade. Thornton has demonstrated terrific chemistry with Rick Nash in the past and is the one free agent that’s capable of matching, if not exceeding Stepan’s annual production.

But signing Thornton is not without its drawbacks. For one thing, Thornton and the Sharks have a mutual love affair that seems likely to continue. The only thing precluding a new pact between the two parties thus far is Thornton’s desire for a three-year deal, which is a tough ask for a near-38-year-old coming off major knee surgery.

That term is something that will rightfully scare New York, too. Opening negotiations with a three-year offer might very well capture Thornton’s attention, but it would be a puzzling direction for the Blueshirts who have committed to “rebuilding on the fly,” traded Stepan for cap flexibility and seem focused on welcoming a new era of young talent to propel the team into the future. Inking a guaranteed over-35 contract with a rehabbing vet that is obviously on the downside of his career just doesn’t seem likely.

If Thornton would agree to a lesser term, then this would be a different story. But again, in that case all roads lead back to San Jose.

So if not Thornton, then who?

The most tantalizing options – Matt Duchene and Alex Galchenyuk – are still available via trade, but New York will have a very difficult time coming up with the pieces to make a deal work. Colorado wants a top young defenseman as the starting point of any package, but you can rest assured that Brady Skjei isn’t going anywhere. Stepan would have been the foundation of any swap for Galchenyuk, but without him, there aren’t logical building blocks for a mutually beneficial deal with Montreal, either.

The free agent market is pretty barren beyond Thornton. There are a host of third- and fourth-line centers including Sam Gagner, Martin Hanzal, Nick Bonino and Brian Boyle, but none are overly enticing.

You can probably cross Boyle off that list as that bridge was burned when Boyle was allowed to leave Broadway for Tampa Bay in 2014. And he’s more of a luxury fourth-line pivot, anyway.

Hanzal and Bonino both appear to be realistic choices. Hanzal is 30 years old and Bonino 29, so a few solid years can still be expected of each and both men have proven capable of handling checking matchups, an area New York desperately needs help. Of course, the market for both should be significant and each player has major injury concerns, with Bonino currently recovering from a fractured tibia and Hanzal having played more than 65 games just once since 2009-2010.

Perhaps the most intriguing free agent is 27-year-old Sam Gagner, who posted a career high 50 points (18 goals, 32 assists), on a one-year prove it deal with Columbus. Gagner started the season on fire and was a catalyst for the Jackets’ potent power play, but his production dropped off in the second half and he was often relegated to the fourth line.

Suitors will be very wary of Gagner’s inconsistencies – it was just a year ago that he was on the scrap heap after a miserable season with the Flyers – and he only averaged 13:43 a game last year, but that could work to New York’s benefit if the Blueshirts are believers in Gagner’s redemption. He’s a righty shot, has the best chance of anyone other that Thornton at matching Stepan’s numbers, is a power play weapon and is still young enough to be part of the team’s present and future.

A two- or three-year deal worth in the neighborhood of $4 million annually might be possible, which would be a massive discount from Stepan and allow the Rangers to reallocate money elsewhere. Gagner would not be without risk – far from it – but he appears to be a puzzle piece that might fit well with New York’s new direction.

There’s one final unconventional option worth mentioning: the Rangers could move J.T. Miller back to center, which hasn’t traditionally been his most effective position but still might be a better direction than the free agent market. New York would still need to replace Oscar Lindberg, but Zibanejad, Hayes and Miller down the middle doesn’t look half-bad.

In that case, the Blueshirts could choose to invest the money fans have earmarked for a replacement center instead in a UFA winger, of which there are many more available.

The most attractive route remains a sign-and-trade deal with the Devils for Ilya Kovalchuk, which would certainly make the Blueshirts a more dangerous club. Of course, at age 34 he’d come with many of the same concerns as Thornton and would cost New York something in return via trade.

Again, each of these players comes with his own warts, but there are plenty of additional options should the Blueshirts elect to move Miller back to the middle.