Should the Rangers Trade Derek Stepan? 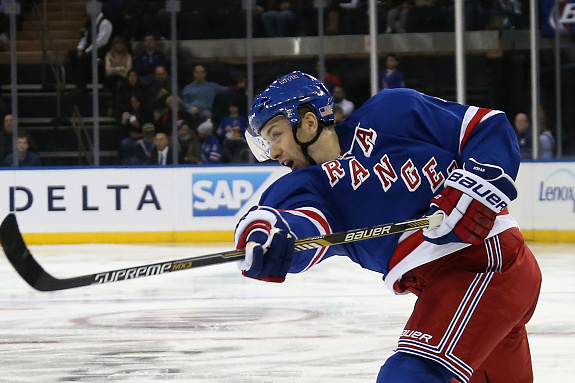 Hey folks, and welcome to a new weekly series where we’ll take a look at potential trade candidates on the Rangers roster and explore the reasons for and against trading them this offseason.  Of course, the case for making a trade is inherently dependent on the value of the return, but this column won’t speculate on that.  Instead, I’ll focus on the merits of the individual player himself in a fun (and dare I say, hot take-ish) way.  It should also make for some interesting debate in the comments.  So, here goes:

After seven years, everyone knows what Derek Stepan brings to the table.  And while it’s true that two-way, 55-point centers don’t grow on trees, the Rangers are fortunate to have an additional two (potentially) on their roster already, in Kevin Hayes and Mika Zibanejad.  Both of those players, if deployed correctly, could more than make up for Stepan’s production if the Rangers deal the center.

From a tactics perspective, Stepan’s lack of speed renders him a poor fit for Alain Vigneault’s up-tempo system.  It’s also not unfair to argue that while his 5-on-5 play merits the designation “No. 1 center”, Stepan’s power play production (a fair thing to look at when assessing value at center) leaves a lot to be desired.  Without getting too granular, Stepan is nowhere near as productive as the other bona fide top centers in the NHL.  His 14 power play assists last season were a career high, but that number was good enough for just 25th among forwards (well behind brand names like Backstrom and Giroux, but also trailing players such as Mikko Koivu and Ryan Spooner)

Lastly, it’s very likely that the Rangers have already seen the best of Stepan.  As crazy as that sounds with a player entering his age-27 season, it’s true.  Over at hockey-graphs.com, @EvolvingWild looked at player aging (read the whole article, because I am being very general here) and concluded that skaters peak around age 24-25 and gradually decline after that.

Given all of the above, plus the Rangers’ glaring need on defense, it seems like a no-brainer for the Rangers to trade their homegrown alternate captain.

Are you crazy? Of course the Rangers shouldn’t trade Derek Stepan!

Jeff Gorton retooled the forwards last summer, putting the Rangers in position to become true contenders again quickly, provided they address the defense.  That forward depth was on full display this season, and Derek Stepan played a crucial role in his team’s success.  When Alain Vigneault gets his deployment right, the Rangers can overwhelm opponents with four lines of skill, capable of creating more scoring chances than their opponent on a consistent basis.

Stepan is a hugely important piece of that puzzle, particularly because of his ability to handle difficult matchups on a nightly basis while remaining very productive.  Stepan’s CF% of 50.7 and CFrel of 3.0 were both third-best on the Rangers this past season among players who played 750 minutes or more.  That’s no small feat, considering the team’s well-documented possession woes.  Compare this with Kevin Hayes, who did not handle his defensive zone-heavy deployment well at all (43.1 CF%, -5.1 rel), proving that he’s likely not meant to be deployed in a true two-way role.

But besides the often polarizing #fancystats argument, trading Stepan would simply leave the Rangers short.  Sure, they could plug the hole temporarily in free agency, but with a lack of draft picks on the horizon, the center position could become a serious weakness quickly.  Because of that fact, the Rangers should look elsewhere on their roster – they’re still very deep on the wing – in order to find a trading partner.

And now, I turn it over to you, our loyal readers.  Should the Rangers trade Derek Stepan or not?  Get in the comments and let us know why or why not.