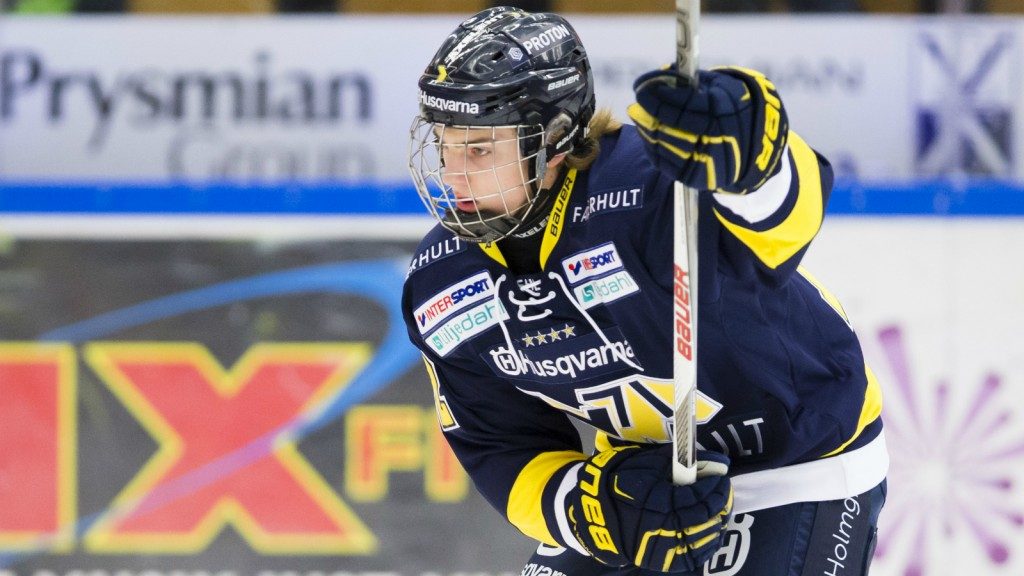 Barring a sale of an unwanted contract to Vegas, it seems likely that the Rangers will hold a first round pick for the first time in five years. There are of course some pessimists who would like to complain that the Rangers hold a first rounder but it is in a “bad draft”. Personally, I think the bad draft narrative is extremely overblown. Most drafts would look weak after McDavid and Matthews but there are still not only really good prospects but awesome depth in this draft.

I think the Rangers may end up like bandits if they can steal a couple of late picks because their value may be so low. Oilers GM Peter Chiarelli even said that this isn’t a good year to have a second or third rounder. I don’t want to pretend that I know more than an NHL general manager but the Rangers could really use more prospects in the system.

In any case, it has been well documented that the Rangers have two glaring needs; puck moving defensemen and game breaking forwards. Today, I will cover some defensemen who might be available in the first round. There are many kinds of defensemen available but I will focus on the 5 who will either be available around the 21st pick or have been “drafted” by the Rangers in mock drafts. In the comment section, post who you would take.

That Erik Karlsson guy was pretty good in the playoffs right? The word “Rocket” can explain Brannstrom in more ways than one. First and foremost, he has absolutely shot up the rankings. Originally pegged as a mid-round guy, by February Brannstrom was expected to be a late 1st round pick and now may be gone be a mid 1st round guy. Rocket can also explain his shot and skating speed. I won’t beat around the bush here, Brannstrom would be my choice with our first round pick IF available. He is everything that we can use in this organization, a smart, great skating defenseman with this much skill isn’t usually available to a team unless they draft him, and we have been looking for someone like Brannstrom for the last decade.

Brannstrom’s draft year stats compare very well to Erik Karlsson. While folly to expect the same career progression, it would be foolish to pass on him if available. The reason Brannstrom is rising is that there have simply been no negative stories about him over the year. As every week passes he does something incredible that only adds to his resume. He had the most goals, assists, and points in the U20 season. He then moved on to the SHL scoring 6 points in 35 games for the SHL champion HV71. He alson had the most shots by a wide margin in the U18 tournaments with 37, the next closest was 28. Just overall great stuff from the young Swede.

Another thing in Brannstrom’s favor is how young he is, Brannstrom is one of the youngest eligible players in this draft and is producing against players much older than him. That makes him a stock worth buying. Defensively, I believe he can improve as he gets older and stronger but his ability to skate out with the puck and break passes up is second to none.

Hague is the opposite of Brannstrom in not only size but draft ranking. At some point considered a top 10 defenseman, Hague has regressed to the 17-22 range in the draft. My only concern with Hague is that he is one of the oldest draft eligible first time players. With all of that said he would be a great add because the combination of his size and his skating ability makes him, in my opinion, a prospect with a very likely NHL future.

Hague does not have the offensive ability of Brannstrom but he is a great two way defenseman who contributes at both ends of the rink. Hague isn’t your usual 6’6 North American-born defenseman, he is your new age big boy with the ability to exit zones in more ways than one and is adept at breaking up the rush in the neutral zone. Hague’s production has steadily regressed over the course of the season as he has faced tougher competition, but he has still produced at first pair rates. At the end of the day, while I think Hague is great, Brannstrom’s production in a league much tougher than the OHL gives Brannstrom the edge, especially because he is 9 months younger than Hague too.

Timmins is another OHL offensive defenseman that I believe the Rangers have seen a lot of, as he is a teammate of Tim Gettinger (2016 5th rounder). Timmins reminds me of a right handed Keith Yandle, but ranks third on my list because he is a full year older than Brannstrom and, like Hague, plays in a lesser league. While his shot is ok from the point, Timmins is without a doubt a playmaking defenseman who is an absolute weapon on the power play. Over the course of the season, he has gotten more ice time and he still produced, mostly through his assists at a top tier level in the OHL. Timmins ended the season with a 15.41% GF%rel on a top OHL team, which can signify something special and shows me a player who only makes his team better.

While his assist production both 5v5 and on the powerplay is incredible, his goal production is certainly lacking factoring in his ice time. I don’t think we should be too concerned over that though, as he generates 2.1 SH/GP but has a 4.6% shooting rate. Another thing that makes Timmins such a weapon is his ability to actually keep pucks in the offensive zone and contributing to the cycle.

Defensively, Timmins is a fierce competitor but can certainly get stronger and improve his gap control. He has great hockey sense, as shown with being a good playmaker, so he is pretty good at anticipating and intercepting passes and then breaking out with a quick pass. I mentioned this a while ago on twitter but offensively speaking, Timmins is in a class of his own among OHL draft eligible defensemen.

Yes he is Adam Foote’s son. Cal plays a modern defensive game, which is using his skating to be an assertive force. His bloodlines have definitely helped him learn what it takes to be a successful NHL player, and I believe that it would only help him more as he develops. He is a big boy with size and skating that has been a great producer in the WHL this year, scoring 57 points in 71 games.

Foote is a cerebral player, while he does have size he doesn’t really play an overly physical game and just uses it to take up space and close gaps really well. A reoccurring theme with these defense prospects is the ability to take a defensive zone play and immediately transition it into the offense, and Foote certainly fits that mold. The concerning thing about Cal for me is that a majority of his points do not come from 5v5 play, only about 48% of them do. He is a good power play quarterback, similar to Timmins in that he makes his living distributing pucks well, but I would really prefer to see him be more of a dominant force at even strength.

Jokiharju is a very interesting name on the list. He is a player that I can see being available at the time the Rangers pick in the first round, but is more of a player drafted between picks 26-30. If the Rangers move back in the draft and add another pick it may suggest that he is someone they were looking at because of his play style.

Jokiharju is for sure, the more volatile player on this list. He is a wonderful skater who can pass and shoot extremely well. He is a great point producer at both 5v5 and the powerplay. and his skating will only help him break out of the zone which is imperative in this day and age.

The concern and why he is so low on the list? Inconsistency in his play. Jokiharju has a few good games and then tends to lay a goose egg a few days later. He is also someone that would benefit from getting stronger and then becoming more of a force in board battles. He in my opinion, does need to get mentally tough but at 17 years old I think that can be said with most prospects. He is someone that can really use a helping hand in just teaching him what is necessary to become a good pro because he has all of the offensive tools and the skating. If the Rangers move back, add a few more assets and take him it tells me that they not only believe in his absolutely dynamic toolbox but they believe that their development staff can help him and I would be fine with that.