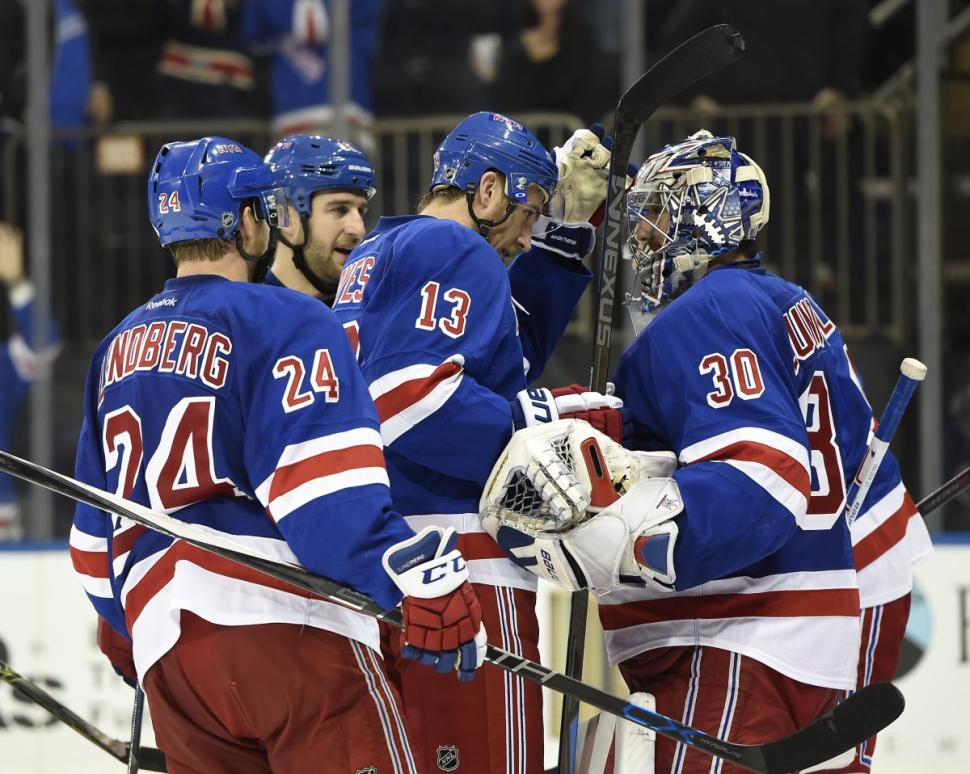 With the expansion draft looming, there’s naturally going to be a lot of talk and speculation about who the Rangers are going to lose to Las Vegas. It’s certainly not fun envisioning one of our beloved Blueshirts in Vegas Gold/Black/Whatever, but it’s just the reality of the situation. Among the most likely candidates to be chosen are Oscar Lindberg, Jesper Fast, and Michael Grabner.

Now, I’m going to focus primarily on Lindberg in this post, because there’s been some buzz lately about the season he’s had compared to Kevin Hayes. Their respective numbers are pretty comparable this past season, with Hayes actually posting slightly worse numbers than Lindberg in G/60, P1/60, relCF%, relGF%, and relxGF%. This is certainly concerning, and isn’t the kind of thing we want to see, but I think it’s fair to throw some cold water on all the talk about Lindberg and Hayes.

You see, implicit in the discussion comparing the two is the notion that should the Rangers have to lose one of them to the expansion draft, it should be Hayes, rather than Lindberg. Along those same lines, should the Rangers opt to trade someone in the offseason for defensive help, Hayes would actually hurt less and likely net more, given his name recognition and reputation around the league. Both of these ideas are reasonable on some level, but frame the issue rather poorly.

The first thing to consider is that Hayes was not put in a situation to succeed by Alain Vigneault this season, being deployed often in defensive situations and being stuck with Grabner and Miller despite indications later in the season that their early production was not sustainable. This, understandably, resulted in Hayes’s worst season since he broke into the league, which is still concerning, but given the reasons behind it not all that terrible. If circumstances are what drove his production down, then circumstances can again drive it up.

It’s also important to note that sometimes players have down years, which is not great but totally fine in the long term. It’s entirely possible that next year, regardless of his linemates/deployment (although hopefully that improves too) that he bounces back. Given then kind of slack some fans are willing to cut guys like Kevin Klein it seems silly to me that we can’t cut Hayes, who’s been a key part of the Rangers’ strong center depth, just a little bit of the same slack. Along similar lines, it’s also possible that Lindberg is having an uncharacteristically good year, and that he comes back down to Earth a bit next year.

Which leads me to my next point: we need to look at the skill set each of them brings to the table. I’m of the opinion that Hayes’s ceiling is higher than Lindberg’s and that losing the former in order to keep the latter would be a mistake. Now obviously if the price is right and some team wants to offer a veritable number one defenseman for Kevin Hayes, Gorton has to do what’s best for the team. Nonetheless, Hayes has proven his playmaking bona fides time and again, while Lindberg, not to knock him, just doesn’t seem to show that same kind of electricity.

But more importantly, the Rangers will likely not be losing either of them in the expansion draft, so the discussion is moot. Michael Grabner is simply too hot of a commodity to pass up, and would likely put up at least somewhat solid point production alongside Vadim Shipachyov next season, with the added benefit of being a valuable asset to be flipped at the deadline for some more draft picks for Vegas. Lindberg simply doesn’t have that kind of value to Vegas, but just in case, the Rangers can always attempt to incentivize the Golden Knights into taking someone like Nick Holden by way of offering them additional draft picks (although not the first rounder, please Gorton).

All of this is to say that yes, Lindberg did outperform Hayes this season, but looking more long term, it’s likely that Hayes turns out the be the better player. That said, Lindberg is a cheap, solid two-way center under team control, and while he would be easily replaced it’s certainly better to have him than not. In any event, we can, and likely will have both come next season, so why worry?