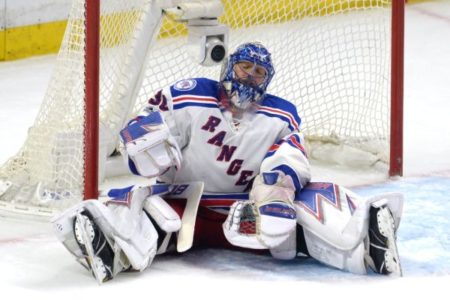 I feel ya, Hank

The Rangers’ 2016-2017 season has come to an end.  I, like many of you, I’m sure, was left with a disappointed taste in my mouth following the Blueshirts untimely exit to a fairly mediocre Senators team.  Fortunately, my writing schedule allowed me to digest for a couple days before committing my final impressions of this season to the interwebs.  In thinking about concepts, angles and a final position for this article, I cycled through many emotionally driven think pieces.  The title “What a Waste” stuck in my head for several days.

I was seriously considering a sanctimonious diatribe about wasting another of Hank’s prime years and the complete unfairness of the generational level of performance he has given the organization over the past decade plus only to be rewarded with consistent disappointment.  Though this isn’t ultimately the point of this article, I do want to touch on that concept briefly.

I know there are those out there who would place the ultimate blame for the team’s shortcomings on Hank, himself.  Citing his lack of ability to get them “over the hump”, so to speak.  This is massively unfair and indicative of someone with a profound misunderstanding of the position, its impact on the ice and the psychology behind it.  I also want to make clear that I am not saying that Hank has been perfect and his performance is beyond criticism.  Of course, he hasn’t been perfect.  Of course, he has had bad games.  Of course, there have been times when his performance hasn’t lived up to the players around him.  My point is that those performances are in the extreme minority.  Lundqvist has given this franchise a level of performance over the past decade that has no other team has had the luxury of.  It is a testament to how spoiled we have become as a fan base since he took over the net.

This transitions nicely into the front office.  Jeff Gorton has done a masterful job revamping the forwards and creating solid depth.  Now, his task turns to the blue line, which will undoubtedly be a much taller task.  With a slow rising salary cap and eight figures of dead weight, it might take a minor miracle.  He has made some solid moves in acquiring Brendan Smith, signing Alexei Bereglazov and grabbing NCAA free agent Neal Pionk.  By all accounts, Ryan Graves is approaching readiness and with the emergence of Brady Skjei as a standout option, there looks to be solid depth options on the back end.  There are four problems: Dan Girardi, Marc Staal, Kevin Klein and Nick Holden.  If you could re-sign Smith to a reasonable deal and have a top three featuring McDonagh, Smith and Skjei, with Bereglazov, Graves, Kampfer and Pionk serving as bottom pair options, you have the makings of a solid back end with depth.  The issue is cutting over $13m+ in defensive cap hits that have little to no value.

For the forwards, I think we have seen what stuck when you threw everything at the wall.  I think Brandon Pirri was a great idea that just simply didn’t work out.  His skill set was unique and useful, but when he went through long stretches of not scoring, he became completely useless.  Matt Puempel was a solid 13th forward and would not be a bad guy to keep around.  Pavel Buchnevich, while having some adjustment pains, had a nice first year and should continue to grow as a player next season.

Jimmy Vesey was more or less what you would expect if you looked at the scouting reports instead of following the sweepstakes and front office drama.  The fourth line will likely be affected by the expansion draft, so we will just have to see how that shakes out.  Point is, the forwards are in pretty good shape.

There is a good possibility that Antti Raanta could be moved for some value to a team that doesn’t think Ben Bishop is a $6m+ goaltender at this stage of his career (he isn’t).  I’ve come to believe that Benoit Allaire could grab someone out of the stands at MSG and make them a viable NHL backup at this point, and there are no shortage of interesting possibilities for a cheap and effective option, should Raanta find himself elsewhere.  Darcy Kuemper, Michael Hutchinson, Eddie Lack, Jack Campbell, Malcolm Subban; there are plenty of candidates out that that could make for interesting development projects.

Which I suppose brings me to the coaching staff.  Individually, there is some variance.  I have seen enough of Scott Arniel’s power play.  Let him go to fulfill his destiny of leading a division rival to a Stanley Cup as head coach.  I feel like it’s hard to judge Jeff Buekeboom’s performance because he had a challenging assignment with this defense.  Obviously, Allaire is safe.

As for AV, I guess it depends.  I always think the notion of having to take away a coach’s “toys” to compel him to make the right decisions is always symptomatic of a bigger problem.  I think with AV this points to him simply being a bad judge of talent.  When he has an objective structure and philosophy, he is a very good coach.  When he relies on his gut and his comfort level in tough spots, his flawed assessments end up in full view.  His stubborn decision to lean on Marc Staal in close games in the playoffs is Exhibit A.  He will be back next year, however, no matter what we all think.

I think the bigger problem is the lack of willingness by the entire organization to adapt to a new business model in team building.  You can (very validly) feel that physicality, heart and soul are still very much of a part of the modern hockey landscape (just look at Zuccarello), but lose the commitment to giving those assignments to bad players.  As an executive or front office member, you can actively seek out those traits in players that you acquire; go nuts!  Just make sure those players can play the game well while they are doing it.  Until the “I’m a hockey man, so I know better than everyone else in the room because hockey” attitude will die, the Rangers will lag dangerously behind the curve of more progressive organizations.

I guess, going back to my original thought, this season was a waste.  The team was exactly who we thought they were, the coaching staff and front office were exactly who we thought they were and the results in the end were predictably mediocre.  I know many out there will just say “be a fan, watch and enjoy the games and don’t worry about all the analysis”.  I wish it were that easy.  It’s like watching a movie where you know the main character is going to die at the end and fully investing in his journey anyway.  Hopefully next year will be different.