Adjustments shaping the series for Rangers 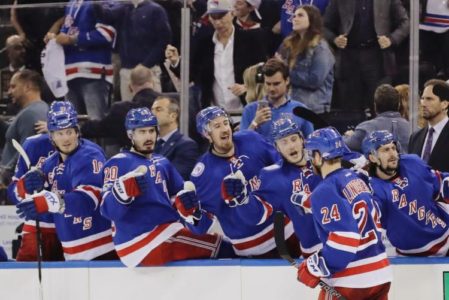 After a miserable showing in the first two games of this series, the Rangers have been dominant for the past two in evening the series up. Heading back to Ottawa, there have been several changes made by the coaching staff that has paid dividends on the scoreboard. Obviously, the players need to execute, but having an effective game plan can go a long way toward putting the players in a position to succeed.

There has been a lot of talk around here about adjustments, or lack thereof. We have seen specific weaknesses of this team exploited over and over again with seemingly no recognition from the coaching staff or front office. The thing about adjustments is that they are incremental. They are local. They matter in the minutia, as opposed to the big picture.

Here at BSB, we are big fans of analyzing in the big picture. To make organizational level decisions, you need to have proper process and proper analyses that lend themselves to the highest probability of future success. The playoffs, alternatively, are all about the small picture. The ability to win four out of seven and then start the process again.

An additional unique feature of the playoffs is developing a game plan to beat the same team four times in a short span. There are in-game and between game adjustments, depending on the results. The decisions that impact one game, may have a very different impact on the next.

Which brings us to the Rangers. For two games, there was a stubborn adherence to in-game strategy that lead to bad results. The Staal-Holden pairing was routinely overmatched by the speedier Ottawa forwards, leading to turnovers and missed coverages. Stapling Brendan Smith and Brady Skjei to the bench in deference to Staal and Holden was maddening. There was a disconnect about the necessity to bring Tanner Glass back into the fold.

In this context, adjustments had to be made. To AV’s credit, he did recognize that changes were necessary. They are not what I feel are the right decisions, but I was happy to see him snap out of the inertia. Sometimes bad process can lead to good results in a small sample. Objectively, Tanner Glass is still a bad hockey player. However, if his presence is a catalyst for AV to make the proper adjustments on defense, I will gladly make that swap.

To his credit, Tanner Glass has played well this postseason when he has been in the lineup. The forwards have the depth and overall skill to mask a weak link in the chain, especially when he isn’t hurting the team on the ice. The defense on the other hand, well we know that story. The way I look at it, the best way to minimize the necessary adjustments is to ice the best team you have available and deploy them consistently with that approach. Clearly, AV makes these decisions by his gut and his comfort level and it has traditionally served him fairly well in his career. He is going to have to be prepared to make the adjustments based on the hot hand or who seems to be a psychological motivator for the guys in the room.

Tactically, it has been more common sense based. You need to employ a strategy to combat the trapping system used by the Sens and also diffuse their counter-attacking speed. Putting pressure on the Ottawa blue line to create counter-attacking pressure and sheltering your less mobile defensemen makes perfect sense, tactically. It’s nice to see those adjustments being made after being on the business end of it in the first two games.

The Rangers have exposed Craig Anderson’s weaknesses and put themselves in a good position offensively. The defense has been better as deployment has improved and Hank has been solid. Ride this until it doesn’t work, then adjust. I will always be a proponent of good process and lineup optimization, but I also understand that sometimes things just work. When they don’t, though, you better be ready to adjust.