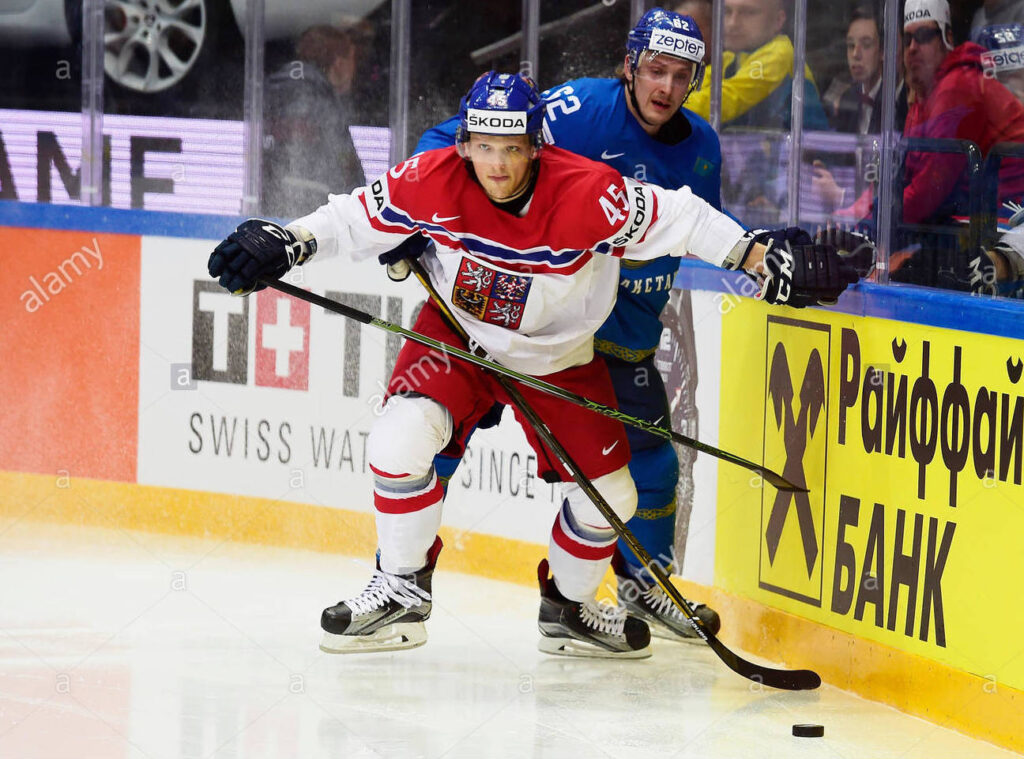 The Rangers have decided that they want to make their prospect pool to model the United Nation. After signing three NCAA prospects in the spring, the Rangers followed up by signing the highly coveted Alexei Bereglazov from Russia and are believed to be in contention to potentially sign Swedish defenseman Andreas Borgman. I believe that the Rangers may be adding a Czech defenseman in the coming days to the prospect pool as well.

Radim Simek is one of the top Czech defensemen not in the NHL, and at 24 years old he wants to take a chance in North America. It was originally speculated that the San Jose Sharks will be the team that will be able to sign Simek to a contract, which makes sense. Good team, good weather, they have a history of signing good Euros to deals (Rangers should sign Tim Heed away from them this summer), and they have a Czech on the team. Apparently, that all changed a few days ago as seen in this article. Here is the interesting quote thanks to Google translate:

A few months ago it seemed that head to San Jose, which for him was very interested. Even for Tomas Hertl, who wears jersey Sharks, found out the information, what awaits him. Finally, but apparently will play somewhere else. “In December, we dealt only San Jose, but then there was more than one club,” said Simek. Target could, for example, to the New York Rangers.

I find it really interesting that the Rangers are linked to Simek here because there is no mention of any other team in this article, or really any other article about Simek for that matter.

So who exactly is Radim Simek? Simek is a left handed, stocky defenseman playing in the Czech league for Bili Tygri Liberec, a team that I suggest we all keep tabs on because their coach is an absolute genius (and apparently being invited to Rangers camp). Simek is a good skater and may arguably be the best defenseman in that league. Over the last three years, he has been the top goal scoring defenseman twice and led the league in plus-minus another time. Simek was also named playoff MVP last year when his team won the championship with a ludicrous 10 points in 14 games.

Unfortunately for Simek, the Czech league is not exactly the best league in Europe. So although he truly does dominate there, I am not sure how it would translate to the NHL. In any case, when you watch him you see a smart, smooth skating defenseman with an active stick on both ends of the ice. Simek loves to play a strong physical game and beating him along the boards on the rush has been quite hard for his opposition in the Czech league.

Radim Simek was 2nd this season in SH/60. I guess you can also say that Simek is a clutch player, as 36.4% of the goals he has scored this year have been game-winners and 45% of his goals came on the powerplay. Is it possible that Simek will be given a very long opportunity to be a power play specialist for the Rangers? Definitely wouldn’t hurt to try. Simek isn’t a pushover 5v5 either, he ranks 6th among all defensemen in 5v5 primary points/60 as well, and two of those guys only played half as many games as Simek.

You may ask if Simek already has a deal in place, why hasn’t the signing become official? Apparently, we have to wait for the World Hockey Championship to end before he can sign a deal (like with Bereglazov), but good news with that is maybe we can watch how he plays against likely better players than the Czech leagues.

The Rangers potentially adding another big time puck mover is incredible, as it shows that they understand that the team has an issue and is trying to fix it with cheap and young talent.