The Rangers are moving on to Phase 2 of their “skip the Metropolitan and tear through the Atlantic” master plan to win the Stanley Cup. Their next opponent is the Ottawa Senators. After dispatching an injury-riddled Bruins’ club in six games, the Sens aim to punch a ticket to the Conference Finals.

A big part of Ottawa’s success in the first round was the solid play of goaltender Craig Anderson. He has become something of a cult hero in the Canadian capital due to his wife Nicholle’s courageous battle with a rare form of cancer (nasopharyngeal carcinoma). Her treatments are progressing well from all accounts, and on a personal level, the Anderson family is easy to root for and we should all hope that everything ends well in a difficult circumstance.

On the ice, however, the Rangers have the task of solving another goaltender that is performing well. Anderson is no Carey Price, so that’s the good news, but let’s dig a little deeper into his game to see what the Blueshirts are dealing with. Format remains the same as always, Stance, Crease Movment/Depth, Puck-handling and Exploitable Weaknesses. Here we go… 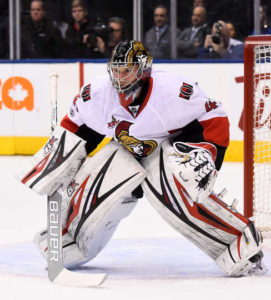 Anderson plays a wider set than his 6’2” height would typically indicate. He has a loaded crouch, which is consistent with his reactionary playing style. Because Anderson isn’t one of those goaltenders who has freakish adduction capabilities in his hips, his physiological reaction to this set up is similar to what many of us would experience: a straight drop to the ice with little lateral capability.

This isn’t to say Anderson is immobile, but his natural stance creates an extra step between dropping and moving, where if he was set up a little narrower, he might be able to fuse the two for some extra efficiency. 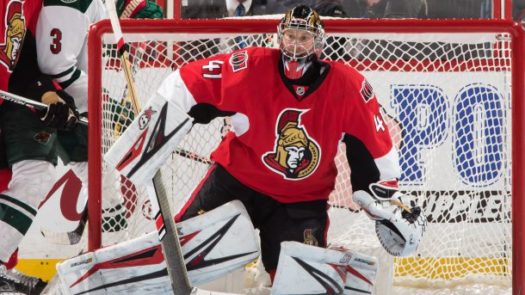 Anderson is also a relatively aggressive goaltender. He is actually the reverse of many modern tenders in that he plays an athletic style with a blocking focus. Most blocking goaltenders try to maintain as much size and as little movement as possible (thus maximizing established blocking surface area). With Anderson, though, he is literally all over the place in his net, but he is always trying to make himself big, through either angular aggression or save techniques.

Positionally, Anderson is very solid, with reliable angles and solid tracking skills. The tracking, though, often goes awry in execution. While he is able to follow the puck fine, his issues with over-commitment and inefficient save techniques can come back to haunt him. We will touch on this in a bit more detail in the “Exploitable Weaknesses” section.

There is an odd mix of old and new in Anderson’s equipment set up. He is currently wearing the just released Brian’s G-Netik 3 equipment line, with some significant modifications. Typically, this line comes with a proprietary “Smart Strap” system, consisting of elastic and Velcro straps, designed to maintain flexibility and reduce weight. Anderson opts for the traditional leather and buckle style straps on his pads. The bigger change is in the calf-wrap. Namely, there isn’t one. Most goal pads have a padded wrap around your calf where strapping joins to protect the back of your leg. Anderson omits this (see photo below, with side by side of stock calf-wrap). 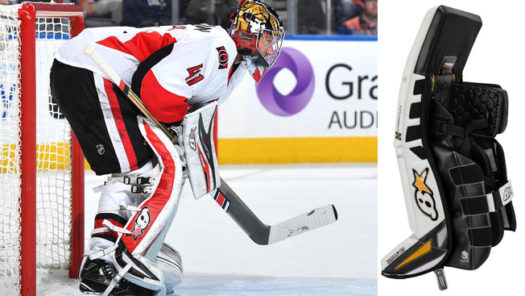 Anderson wears a very large chest and arm unit, which aids in the blocking component of his style, while also filling gaps in his slight frame. He wears the newest cowling-less goalie skates, but doesn’t really play a slide-centric game. He is something of a paradox with his equipment choices.

Anderson is a very competent puck-handler, generally. He is not a big stretch pass guy, but can distribute effectively and generally has good judgment as to where the puck needs to go. He does have a slight habit of getting a little ambitious and leading to some turnovers, but it isn’t a frequent problem.

The biggest weakness in Anderson’s game is his lack of technical foundation. He has a habit of pulling himself way out of position attempting to either force a bad angle shot or trying to compensate for weak footwork on net front scrambles.

He is not overly mobile laterally, however, he is a gifted athlete and excels at making desperation-type saves. He is able to put up staggering numbers in short samples when he gets hot, but it doesn’t bode well for long-term consistency. In a playoff series though, Anderson could make things very difficult.

The keys for the Rangers are going to be to get Anderson moving. Be it lateral passing, well placed shots for rebounds, traffic in front, anything that gets him out of the static stance position will bode well for opening up holes and allowing for some chaos in front. Sure, there are going to be some frustrating saves, but if those happen, it means the Rangers are creating chances.

Of the remaining goaltenders, Anderson is one of the more preferable draws. Make no mistake, he is going to make some saves that make us all put our heads in our hands, but structurally, he is very beatable. The Rangers just need to execute.