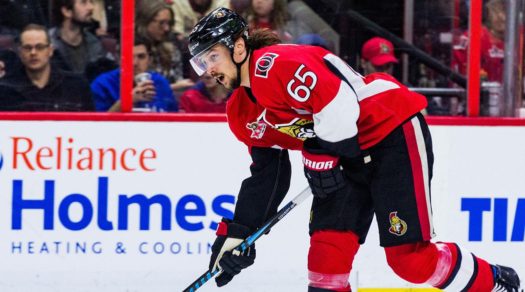 Erik Karlsson is so good that you could make a case that he alone gives Ottawa the edge on defense over the Blueshirts.

The 26-year-old D-man is in the midst of his greatest season – which we seem to say every year. In addition to being the catalyst for the Senators’ offense, Karlsson has really rounded out his defensive play and is now a shutdown player in his own end, too.

Karlsson is averaging over 30 minutes a game so far during the playoffs and shows no signs of being hampered by two hairline fractures in his left foot. Keeping him in check may be the key to the series.

Beyond Karlsson, the Senators are an unimpressive group. Dion Phaneuf, a.k.a The Guy That Ended Mike Sauer’s Career, remains a freak physical specimen and has gone from being so overrated that he’s underrated once again. He scored the OT winner in Game 2 against the Bruins and will make life difficult for the Blueshirts all series.

Marc Methot is quite popular with Becky and is a solid stay-at-home blueliner, but he might be exposed by the Rangers’ speed. 23-year-old Cody Ceci rounds out the top four. He was billed as an offensive defenseman in his draft year, but has yet to break out – although he was second behind Karlsson in ice time this season.

Like the Blueshirts, Ottawa has shuffled players in and out of its lineup on the bottom pairing. Chris Wideman, Ben Harpur, Fredrik Claesson and Mark Borowiecki all saw time in Round One. But due to Karlsson’s enormous workload and the 25 minutes a night Phaneuf and Ceci are eating, these guys are complimentary players and will be used lightly and only in the right matchups by Guy Boucher. Alain Vigneault will certainly try to abuse Ottawa’s bottom pairing when he gets the final change in New York.

As Dave described in his systems preview, Ottawa has deployed a 1-1-3 forecheck under Guy Boucher to great success. Though the Senators aren’t deep along the blueline, they play outstanding team defense and make it very difficult to even gain clean zone entries. New York struggled mightily to break through the neutral zone in the first matchup between these teams this season.

On the Rangers’ side, the defense is playing some of its best hockey of the season. Ryan McDonagh has been out of his mind, Brendan Smith has been a rock, Brady Skjei is taking the next step and Marc Staal and Dan Girardi have both been thriving in the postseason. Despite Karlsson’s greatness, the advantage here actually belongs to New York.