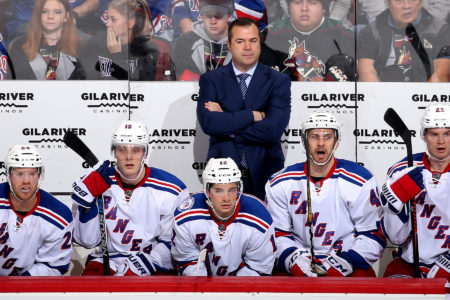 Since the analytics movement began a few years ago, there has been a pretty consistent back and forth amongst the old and new school about the proper way to go about assembling a hockey team. The old adage is that you can’t build a team on a spreadsheet. More goes into it than that. On the other side of the coin, you take what you can quantify and use the most important data as the backbone for the team’s construction. At the end of the day, it all kind of boils down to “how do you quantify chemistry, character and heart?” It is even possible?

Historically, this has been a challenge for GM’s. Hockey is a sport that doesn’t do well with prima donnas. Sure, plenty of teams have won with selfish players, but the conventional wisdom teaches us that is an outlier. This isn’t baseball or football with guys complaining about their lineup spot or how big their locker or shoe deal is. Hockey has always had less money; guys rely on each other more during a game and are more of a family off the ice.

There are old sayings about being so close to your teammates that you would go to war with them. There is a band of brother’s mentality that allows you to will your way to results because you believe in each other and the cause that unites you. Something like this could never be quantified and I wouldn’t presume to say it doesn’t exist or that it can’t happen. Look at the Miracle on Ice. Sometimes, the right mix of personalities can do extraordinary things.

We love those stories. Teams and players like that are so easy to root for. You put on the hard hat with them and off you go. They deserve the accolades they are chasing because they have the right attitude and they put the work in. We all want our teams like that. I think that was a big part of the reason why we all hated those mid-2000’s Rangers teams so much. They were bunch of over-the-hill mercenaries looking for a cushy payday without any real personal desire to bring glory to Broadway.

When a GM goes about building a team or looking to make changes in an organizations culture, these factors undoubtedly come in to play. They want their employees (players) happy. They want them to have a work environment that they can thrive in. The problem is, how do you find that winning mix? Most of the time, GM’s haven’t personally met with the players that they are acquiring, or if they have, it was in a tiny window that amounted to a sales pitch. You have to go off of reputation. Just because a player is considered to be a good guy, doesn’t mean he is the right good guy for your room.

As outsiders, we get wind in the press about a player’s monetary and term demands, about multi-generational wealth and ice-time requirements. We have no idea if this is coming from his agent, his family, or himself. We get these little sound bites when a player’s value is being discussed, lacking all context or more information. We have no idea if or how it accurately reflects on the character of that player. We just react.

So, if character, drive and selflessness are such important ingredients to a winning team, how do you set out to build that? Do you try to explore certain criteria? Do you try to find guys from similar feeder programs or hometowns? This might sound like a great idea to find commonality, but you never know. Guys might have gotten into it over a girl in college or one guy’s father-in-law fired the cousin of the other back home. Maybe diversifying the locker room with sets of different experiences and cultures is the way to go? Maybe the room develops cliques and the team has a hard time gelling. My point is there is no tried and true formula for how to get guys to connect on a personal level.

In my experience, the guys we most think of when it comes to “character” or “heart and soul” guys are the ones who people did not believe in at various stages. The talent wasn’t obvious or they have a distinct physical disadvantage, like size or skating ability. A flaw that forced their desire and work ethic to overcome. The easy to root for guys.

Players with obvious talent don’t necessarily face adversity, proper. Sure, they have challenging periods of development and lulls in performance, but are typically not dismissed outright. Which I guess is part of the bigger point, guys like Mats Zuccarello are so easy to like because of what they have been willing to do to realize their dream. Someone like Rick Nash is easy to goat because his talent is so evident and he should be living up to our expectations.

Which brings me back to finding the right mix for a championship team. When it comes to those great underdog stories and teams of destiny (which are fewer and fewer in today’s NHL), I don’t believe you can build from that perspective. You can’t cookie-cutter personality types and expect them to bond. You need to fill your organization with as much talent as possible and hope there is synergy. If there is, you look like a genius GM and if there is not, you look like an idiot couldn’t get a talented team to perform.

This ultimately brings me to the Rangers. The debate over lineup decisions carries so much personal bias about the ingredients of a winning hockey team. Alain Vigneault knows the individual personalities of his players far better than any of us could, and if he feels certain players respond to certain treatment, we cannot dispute whether or not he has a tangible reason for that belief. We can only see the results. I hope he chooses to field the most talented team possible when the playoffs roll around, instead of trying to find the magic potion to coax extra effort and drive out of his team. The man is a tactician, not a sociologist. Put the most talent as possible on the ice and let the chips fall where they may.