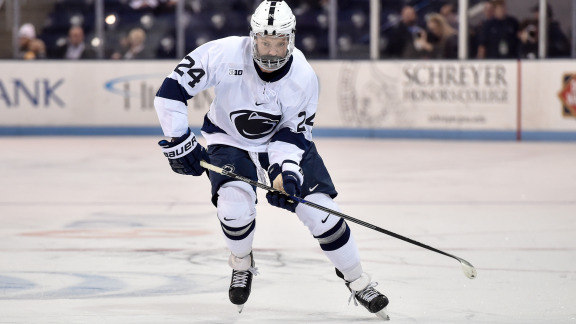 Per TDC Men’s Hockey, the Rangers have signed undrafted free agent defenseman Vince Pedrie to a two-year entry level deal. TDC, citing Pedrie’s Facebook page, noted that Pedrie had two years of NCAA eligibility left, so this is a little bit of a steal for the Rangers and Hartford Wolf Pack.

In his second year at Penn State, Pedire put up a line of 8-22-30 in 38 games, which was an eight point improvement on his 8-14-22 line in his freshman year. Pedrie was instrumental in helping Penn State, which did not even have a D1 hockey team five years ago, win the Big Ten title this year.

Pedrie’s ELC begins next year, and he will likely report to Hartford on an ATO for the remainder of this season. With Vinni Lettieri in the fold, the turnover on the awful Wolf Pack team has begun.