Regression, thy name is Michael Grabner 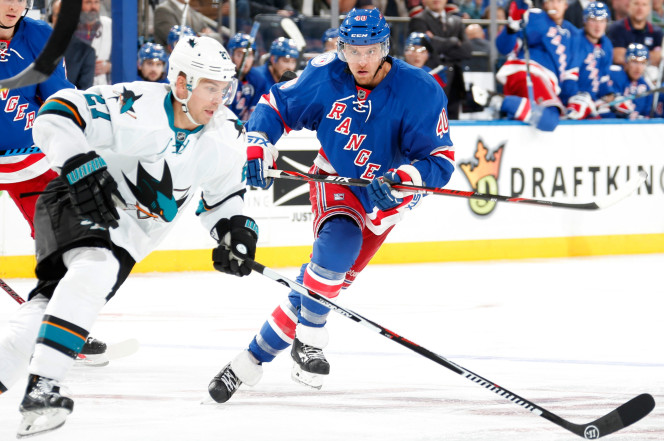 Michael Grabner has been a helluva find for the Rangers this year. His 27 goals and 39 points are about double what any rational mind expected when the Rangers inked him to a two-year deal worth $1.6 million. Expansion draft fodder. Solid bottom-six depth. Decent penalty killer. Those were the expectations.

But then Grabner started scoring, and scoring often. He started scoring so often that he became the leading goal scorer on the team, and has an outside shot at a 30-goal season. With that came something we all saw coming. Grabner was shooting over 20%. The regression was coming. And it was going to come fast.

Now we have a Grabner that has just one goal in 17 games. It’s not for lack of shots either. It’s just simple regression. Grabner’s career shooting rate is 12.6%, and even with his recent slump he’s still at 17.8%. While not a guarantee that he will continue to slump, it’s a safe bet that he will not be scoring at the same clip going forward.

There’s more to Grabner’s game than just scoring goals though. And while we shouldn’t expect him to be an elite scorer, there are other benefits. Steve Valiquette mentioned on a broadcast a little while ago that teams are actually more cautious around Grabner when on a powerplay. In theory, this makes the penalty kill significantly more effective. I say in theory because the PK has been shaky lately.

This does give more weight to the argument that the Rangers should trade Grabner in the offseason, since he is unlikely to produce like this next year. There was a vocal crowd that thought moving Grabner at the deadline was the best choice, a move I disagreed with. However the price for Grabner, especially if he hits 30 goals, may never be so high. There is certainly a valid argument for moving him this offseason, as there is keeping him.

That said, the Grabner we saw earlier in the season, the one scoring seemingly at will, is one we likely will not see for the remainder of the season. That doesn’t mean he is going to be ineffective. It just means he is going to need to contribute in other ways, which he already does. Speed is always a weapon, especially in the playoffs.