Is this the beginning of the end for Kevin Klein? 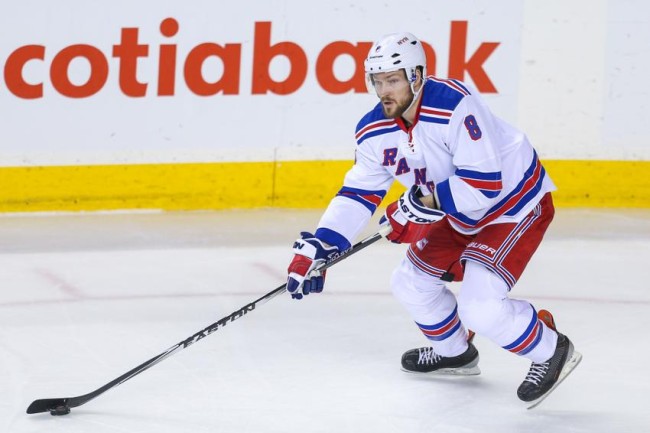 One of the big storylines this season for the Rangers has been injuries. Throughout the season, skaters all across the lineup have endured some form of injury or another, with even the perennially healthy Henrik Lundqvist falling victim to the injury bug. We’ve already covered the Jesper Fast angle of the injury story, so I thought I’d probe one of the more interesting questions raised by a fully healthy lineup: what happens with Kevin Klein.

Most everyone can acknowledge that Klein has had a down year. He’s never been much more than a low-end second pair, more appropriately third pair guy, but in years past his offensive production has masked his shortcomings. This year not so much, with the play of red hot rookie Brady Skjei compensating for his errors at best and those same errors on full display at worst.

Klein is an interesting case because while Dan Girardi or Marc Staal have seen similar struggles, both of them have long histories with the New York Rangers and have built up something of a reputation. There’s no doubt in my mind that Dan Girardi, for better or for worse, will wind up right back with Ryan McDonagh on the top pair once fully healthy (or at least healthy enough to play). Klein doesn’t really have that working for him on this team, and given the emergence of both Adam Clendening and Steve Kampfer he may soon find himself on the outside looking in when it comes to a roster spot.

Time to get what some might call obvious bias out of the way: Adam Clendening is better than Steve Kampfer. For whatever reason however, AV doesn’t seem to think so, preferring the steady/reliable/solid/whatever Kampfer over Clendening. This could be the subject of its own post, so I’ll spare you, but the point is that the two players directly competing with Klein are Clendening and Kampfer, with Kampfer probably more likely to draw into the lineup should Klein get benched.

Looking at the stats gives a slightly clearer view of the situation, although it should be said at the outset that the three players’ icetime varies widely, with Klein playing the most minutes at 837.59, Clendening playing 374.78, and Kampfer playing just 87.16. With Kampfer especially, these numbers need to be taken with a large grain of salt. Still, with raw CF% Clendening and Kampfer both lead Klein, posting a 56.36 and 53.06 respectively to Klein’s 48.85.

Looking at xGF%, and SCF% in order to gauge how much the three defensemen limit high danger chances muddies things a little bit, with Clendening still coming in first at 56.47 and 59.09, Klein at 50.32 and 53.15, and Kampfer at 48.49 and (woof) 42.11. What this tells us is essentially this: Clendening has been better than both of them by a good measure, but Kampfer and Klein are relatively close with the exception of scoring chances (I like xGF% better than SCF% for a few reasons, but that too could be its own post, although Manny over at corsica.hockey has a great one all about his xG model).

So is this the beginning of the end for Kevin Klein? He certainly hasn’t had a great season to start, and both Clendening and Kampfer have emerged as legitimate competition for his roster spot. Given that Klein doesn’t have quite the same stock of loyalty points that Dan Girardi or Tanner Glass have with AV, it wouldn’t be beyond the realm of the reasonable for him to remain benched when healthy, at least until the coach decides to shake things up.

Looking at the bigger picture, this poses the problem of Klein being a relatively expensive third pairing defenseman who now might be a potential healthy scratch. If I’m Jeff Gorton I’d take the cheaper options any day of the week, and especially given the defensive remodel that’s likely to take place this summer, Klein’s days as a Ranger could be limited.