On Tanner Glass and playing down a goal in the third 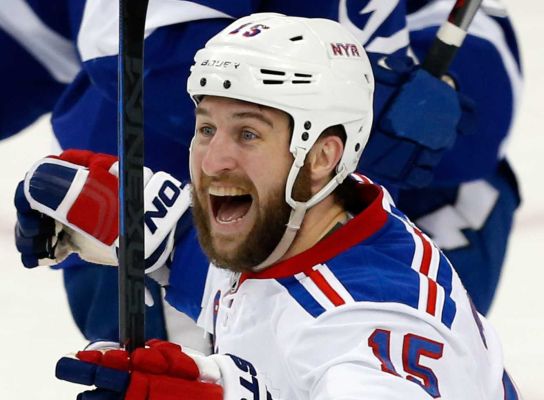 Folks, I’m going to break a rule of mine. You see, I had promised myself that aside from the game recap the other night, I wouldn’t devote any time or thought to the Tanner Glass recall. Figuring that it’s a minor move likely to be soon undone, and deciding that there were better horses to beat to death than the one that’s been beaten over and over, I made a solemn vow to just find something else to talk about.

The other night however Alain Vigneualt made a decision that simply put, blew my mind. I had long since turned off the game (I wasn’t feeling well and just wanted to sleep), so I learned about this all secondhand, but with a one-goal deficit late in the third AV opted to play Tanner Glass as his extra attacker, benching Pavel Buchnevich.

As a fan and a writer I’ve certainly been critical of some of the decisions and habits of coach Vigneault, but on the whole have liked what he’s brought to the team. He’s certainly been an improvement over our previous skipper, seems to get his system across well, and his record speaks for itself. Still, I feel as though AV’s late-game decision the other night was crossing the Rubicon in a way.

So much of the debate over Tanner Glass’s place in the Rangers lineup has centered around advanced statistics and the idea that playing with a certain type of edge can’t be quantified. My position on the matter at this point should be clear, and I have no interest in re-litigating that debate. Instead what I’m going to propose is that this decision AV made the other night is about a much more simple thing: evidence.

You see, I get the defense of AV putting Glass on as an extra attacker. In essence, it’s that he was having a good game, played well since his recent call-up, and the Rangers wanted someone to go to the front of the net and provide a screen. Still though, there’s something about this that just doesn’t make sense.

While Glass’s style of play certainly lends itself to the idea that he’d be unafraid to go to the front of the net and get scrappy, and his recent success is undeniable, all of the evidence we have points to the idea that any other player would have been more likely to contribute to a goal. His two-point night the other evening is best understood as an aberration, with his point totals, GF, CF, and SCF all indicating that he just doesn’t generate that much offense.

That’s not to knock the guy, whom I respect as a person, but what’s perplexing further still about the pro-Glass argument is that the typical line of thinking seems to be flipped on its head to arbitrarily defend a player whose play is obsolete at the NHL level. Proponents of Glass would tell you that his game brings grit and toughness to the Rangers that isn’t otherwise present, that he kills penalties, and that he helps establish a good forechecking game.

Suddenly though these qualities, general defensively or transitionally focused are supplanted by a new quality: he’s actually an offensive dynamo. It just doesn’t make sense. Two points in one game notwithstanding, all of the evidence we have points to the idea that he just doesn’t generate offense, with his long scoring droughts being almost unparalleled league-wide.

While you might bring up that other players on the Rangers, Derek Stepan for example, also are experiencing long scoring droughts, that comparison does not hold. For one, the length of time between goals isn’t as long, and what’s more is that all of the evidence suggest those players would eventually return to their normal ways of producing at least some offense. With Glass that’s just not there.

It’s true that Glass had a fairly solid CF% of 50 the other night, but again the big issue here is evidence. There’s overwhelming proof that anyone else on the team might be more inclined to score that one special goal late in the game with the goalie pulled, and instead AV went with Glass. Given the weight of the evidence against his decision, it simply comes across as arbitrarily playing favorites, and a way to stick it to fans who really do sincerely just want the best for this team. It’s nothing against Glass or AV as people, it’s just about basic concepts of proof. It gives credence to the argument that AV plays his favorites to his detriment, and that’s not what this team needs right now.