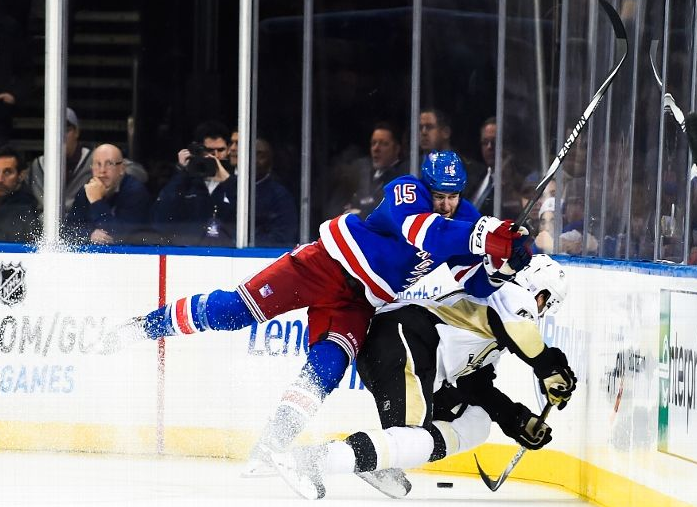 Yesterday sure was a day in Rangerland, wasn’t it? The Rangers world was lit on fire when the Rangers announced that they had recalled Tanner Glass and Steven Kampfer. The move was designed to address a perceived issue that the Rangers lacked toughness. So Glass and Kampfer have been recalled. And I have some thoughts.

1. Let’s start with the reason why the call ups were made: Toughness. First things first, toughness is a very subjective term. I think toughness is quantified by playing through injuries. Others believe it to be the number of hits delivered. Regardless of your definition of toughness, there are two problems with these moves. The first is that two players –one (Kampfer) who won’t be in the lineup in a week– do not change the toughness culture. Players that have that requisite “skill” need to be dispersed throughout the lineup. The second is that no one seemed to have a problem with this exact same lineup in January when they were winning games. It only became an issue over the past four games.

2. That brings me to my main gripe with this move. This is a 100% reactionary move off a bad week. The issue wasn’t they were getting outhit or out-toughed, the issue was they stopped skating and forechecking. They allowed their opponents to run all over them and didn’t put pressure on them in the offensive zone. The games would be significantly different (maybe, I’ll get to that) if they were executing their 1-2-2 forecheck instead of playing a passive 1-4. I don’t believe that was by design, I think the Rangers just had a bad stretch where their heads weren’t in the games. But again, nothing to do with toughness.

3. Getting to that whole games would be different thing: Maybe they wouldn’t be. The Rangers faced at least three playoff teams, possibly four. They lost to two of the top three teams in the league in Columbus and Washington. They lost to the Atlantic leading Canadiens in there as well. As we’ve been saying since the beginning of the year, this team wasn’t going far because of the blue line. So when the forwards aren’t on, as mentioned in point 2, they won’t win.

4. Now on to the actual players. The Tanner Glass horse has been beaten to death. We all know what he does and doesn’t bring to the lineup. He will, at the very least, attempt to chip the puck into the zone and establish a forecheck. But other than that, there should be no expectations for a guy who will play eight minutes a night and not play on special teams. Also worth noting that if Tanner Glass is the guy you want to help re-establish a forecheck, then something went significantly wrong somewhere else.

5. As for Steven Kampfer, let’s not forget he’s the one that the Rangers received for Dylan McIlrath and hasn’t been a consistent NHLer in his career. That’s not a slight against Kampfer, he’s made it further than any of us. But it’s a statement about what he’s expected to replace. Adam Clendening will be out of the lineup, and that’s likely the wrong move. But this is a temporary move until one of Kevin Klein or Dan Girardi are back in the lineup.

6. As you can expect, I do not like these moves and think they are signs of poor asset management and talent evaluation. But I guess there’s more to come.