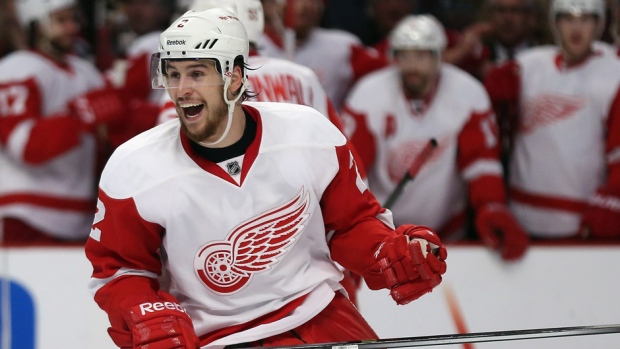 The Rangers made their first major move at the trade deadline yesterday, landing defenseman Brendan Smith of the Detroit Red Wings for a 2018 2nd rounder (Ottawa’s) and a 2017 3rd rounder. The price was steep, but the Rangers got a solid upgrade on defense. There’s a lot bouncing around in my mind, so let’s have at it.

1. Make no mistake. Smith is a major upgrade on both Kevin Klein and Dan Girardi. He’s not flashy. He’s not going to score much. But he’s steady in his own end. He is a good skater. He moves the puck well. He does a lot of little things needed to win the game. He’s basically a left-handed Anton Stralman. If you recall, Stralman didn’t score much for the Rangers, but was loved for the little things he did with the puck to help the transition out of the defensive zone.

2. That said, no one is perfect. Smith will make mistakes. They will be glaring mistakes. And those will likely stick out in your mind when you go to evaluate the trade after the season is over. But for every mistake, he makes five plays that are solid. He’s one of the guys that you need to pay close attention to when watching a game to see all the little things. Much like Stralman or Jesper Fast.

3. Despite the praise, let’s be real about what Smith is. He is not a top pairing defenseman. He is more of a capable 2RD and great 3RD. If a team is deep enough to have him on their third pair, then they are a team that can possibly make a run at a Stanley Cup. Then again, Alain Vigneault probably has him slated as the 3RD, with Brady Skjei. It’s clear he sees Dan Girardi and Nick Holden as top-four defensemen, despite what clearer minds may think. So perhaps I’m off in my analysis.

4. The Smith move alone doesn’t move the needle enough for the Rangers to compete with Washington or Pittsburgh. When both Klein and Girardi are healthy, at least one will be back in the lineup. As noted, the Rangers still need a true 1RD for Ryan McDonagh. All signs point to them being unable to land such a prize.

5. So if they can’t, then the only way for this team to stand a chance is to take a step back and evaluate the success of the Skjei/Clendening pairing and see if that is an appropriate path to take for the playoffs. The good far outweighs the bad of that pairing, but comes with a difficult choice of benching two of Girardi (not bloody likely), Klein (probably), Holden (LOL), or Staal (LOLx2). So unless one of those guys is moved, we won’t see a major improvement on the blue line with the Smith deal.