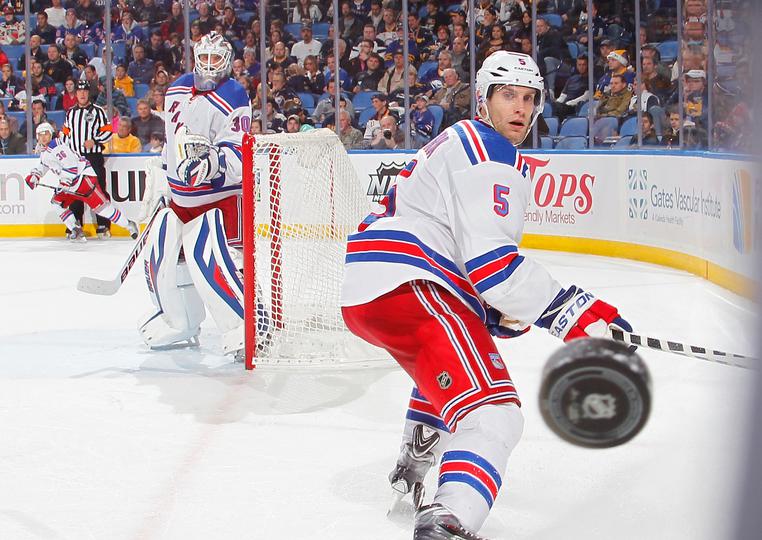 This offseason, head coach Alain Vigneault said the plan was to get defenseman Dan Girardi some rest from time to time. The idea made sense, as Girardi played most of last season with a fractured kneecap, and was just downright awful. This was on top of his declining play becoming the focal point among fans. After all, keeping Girardi fresh is the best way to get the best hockey out of him as he ages.

However through this point of the season, Girardi has been a healthy scratch for rest just once. It has showed in his on-ice performance, as he simply can’t keep up with the opposition’s top skaters. But that hasn’t stopped AV from dressing him nightly. He was asked about this after practice on Saturday, and his answer clued us into what his approach will be going forward.

Right now points are so important that I am really focused on that one game at a time. Our schedule has been pretty good lately, moving forward the schedule does get more challenging and we have five back to backs in March, one coming up, eight games in 13 nights. It is something that depending where I feel his energy level is and the rest of the group it is something that might consider. You have to go with what your best lineup is, it’s such a competitive league and we will see how it goes.

That last sentence is very telling. AV wants to go with what he thinks is his best lineup every night, regardless of the bigger picture of keeping his guys fresh. Long story short, AV isn’t resting Girardi any time soon.

We can spend all day talking about how Girardi should or shouldn’t be in the lineup. That’s not really the point though, is it? The point is that AV has altered his approach to this season –something he’s well within his right to do– and it could be to the detriment of future success of the team.

There are two pieces at play here. The first is keeping Girardi fresh. He got off to a somewhat decent start this year, but as the season continued he continued to break down. Fatigue is clearly a factor. The other is keeping Adam Clendening in game readiness, an insurance policy in case he is forced into more steady playing time.

When AV made the announcement he was going to keep his veterans rested, we were all on board. This altered approach is a little puzzling, given the extremely poor play from Girardi (and Kevin Klein) and the seemingly viable option in the press box. I still get the feeling a move is coming, but what does it matter if AV sticks to his guys?