Rangers musings: Looking ahead to the trade deadline 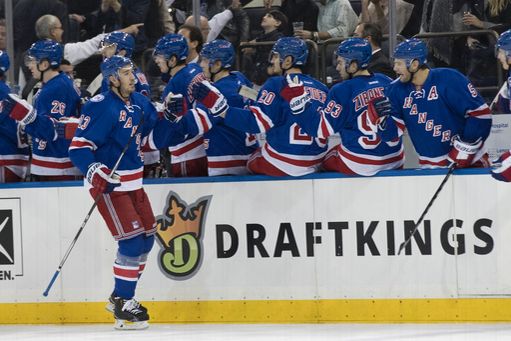 As Sunday turned to Monday the Rangers are in a nice place; they’re riding a five game win streak with Henrik Lundqvist being fresh off win number 400. Without further delay, let’s muse all things Rangers with a focus on the impending trade deadline.

Every team has their needs and everyone around the league know what the Rangers’ needs are which beggars the question; when a team’s need is as glaring as the Rangers (hello right handed blueliner) is it at all possible to get value at the deadline? If the Rangers do make a move to improve the one obvious flaw that they have, it will take something very special from Jeff Gorton to not overpay and/or give up a major asset or two.

Stating the obvious: JT Miller, Kevin Hayes and Brady Skjei should all be untouchable.

Sticking with the trade deadline theme and it’s good timing that Kevin Klein has played better of late. He’s still an adventure in his own end, his positional play is still erratic but when he plays instinctively and doesn’t try to hold the puck he’s at least competent. Don’t think his recent two goal showing will have gone unnoticed around the league.

If the Rangers are willing to move Klein I cannot help but think they can get a solid return. You look at the return some mediocre (or past their best) blueliners have fetched in the recent past and you have to think Klein can fetch something, even if his value is at his lowest. John Michael Liles netted a prospect and two mid round picks last year. Eric Gelinas netted the Devils a third-round pick. Two players that got solid returns despite offering little upside to the acquiring clubs.

Rick Nash is flirting with us. He’s constantly threatening to burst out but can’t seem to put up consistent numbers. I feel like he’s about to break out and have a hot streak though. He’s driving to the net regularly and is potting a goal here and there but can’t really string back to back games together right now. I feel like luck hasn’t been on Nash’s side. Importantly though, he’s playing in the right areas and is always around the goal; that’s how he scored his goal against the Avalanche.

Reflecting on Henrik Lundqvist’s immense achievement this past weekend. Based purely on a player’s body of work with the franchise (so, not what they did elsewhere), is Lundqvist the greatest New York Ranger ever? Does a player have to have won a Cup to be in the mix for such an accolade?

Lundqvist is only the third goalie (Tony Esposito and Marty Brodeur the others) to have 400 wins with one club. Bare in the mind how old the NHL is. That’s such an impressive feat.

I can’t help but love watching Chris Kreider this season. He’s becoming a dominant, consistent presence. He just gets it now. He’s not just using his wheels and his lethal shot but he’s going to the right parts of the ice more than ever before. He’s scored a lot of goals this season around the net. When a goal bounces off you and in, it’s not an accident if you’re getting in the right positions.

I’m intrigued to see what the future holds for Oscar Lindberg. He’s fighting for his place in the line-up and I still think he’s the Rangers best fourth line centre but does he hold more value as a trade chip (a cheap one at that) or in the line-up?

Watching Kevin Hayes this season reminds me of an important principle when deciding how to handle an asset: patience is important. Last summer I thought the best way for the Rangers to address its blueline was to trade Hayes, but I am so happy Gorton showed patience with what was then a player that was stuck in neutral. Right now Hayes is a joy to watch and his playmaking is at an elite level. Had the Rangers followed my suggestion last summer they would have traded an asset at it’s lowest value – I’ve never been happier to be wrong about a player.

Sticking with the main theme of this week’s musings – the trade deadline. The Rangers still need to improve their pipeline. While they need to improve the blueline, Gorton should also be busy elsewhere. If Matt Puempel and Brandon Pirri aren’t going to play the Rangers need to get some draft picks for them. If an injury hits the Wolf Pack can offer up Hrivik, Jensen and/or Nieves who can all easily come up for a game or three. The Rangers are in a nice spot up front; it’s time for some asset management.