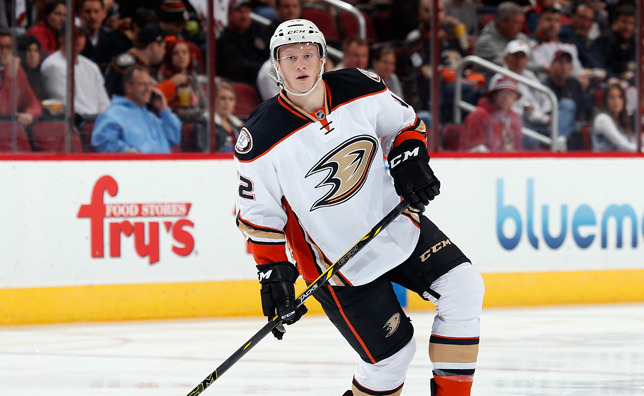 The defensemen on the Ducks have been a topic of conversation all year. Cam Fowler was the rumored odd man out, but Bob McKenzie said he has been so good for the Ducks he’s practically untradeable. With that in mind, I thought I’d revive a little idea we had on the podcast some while back as it pertains to fixing this blue line: trading for Josh Manson.

You see, the Ducks are in a bind. They have a fairly stacked blueline, plus need to protect Kevin Bieksa in the upcoming expansion draft due to his NMC. They can’t protect all of Fowler, Bieksa, Manson, Sami Vatanen, and Hampus Lindholm, so it stands to reason that one of them will end up being traded or the Ducks risk losing them for nothing. While there’s  certainly a chance that ends up being Vatanen, I’ll save that hype-train for Dave, who more or less is his biggest fan. Instead, let’s imagine that Manson is the odd man out here.

Let’s start with the most obvious benefits of trading for Manson – he’s young and right handed (he’s also good, but we’ll get to that later). The Rangers desperately need a top-pairing right-handed defenseman to play alongside Ryan McDonagh, and Manson has done a pretty good job holding things down with Hampus Lindholm (who I’d really do dumb things to acquire, but I really don’t think that’s happening). Dan Girardi simply doesn’t cut it these days (or most days last year, or the year before that…) and given the season that McDonagh is currently having, he could likely jump to a whole new level with a competent defense partner.

Now the other thing that I mentioned is that he’s young. This doesn’t get talked about that much with our blue line, as the focus tends to be on their on-ice performance. It needs to be said though – the Rangers defense is old. With such a nice youth movement going on at forward that it’s easy to forget, but Girardi and Kevin Klein are both over 30, Marc Staal is exactly 30, and Nick Holden is 29. Even if these guys were performing well, it still would bode ill for the future, as youth is an essential part of any roster construction. If Brady Skjei and Ryan Graves are the only young defensemen, then you’re looking at an old blue line for a few years. Manson, who is 25, helps that.

As far as numbers go, Manson has the 23rd best raw CF% in the league  (minimum 520 minutes) at 53.10%, and the fourth best relCF% at 5.35%. His xGF% is 5th best in the league, just behind PK Subban at 56.86%. For those of you unfamiliar with expected Goals For (xGF%), it’s a weighted stat that takes into account things like shot type and location to calculate the expected goals for a given player, and xGF% is then taking that same metric as a percentage. You can read more about it on the blog section of corsica.hockey,

As far as individual offensive production goes of course, Manson isn’t quite as impressive, coming in fairly middle of the pack with a P/60 0.59. Combine that with his solid shot stats, and you get a solid, responsible, steady defenseman. Certainly something the Rangers lack on the right side.

Now granted, a lot of this has to do with playing alongside Hampus Lindholm, who in my mind is one of the best young defensemen in the league. This shouldn’t be a knock on Manson however, given that were he to make it to Broadway his most natural place in the lineup would be alongside Ryan McDonagh, a league-wide name and talent. Anaheim finds themselves in a tricky spot with this expansion draft looming, and depending on how they forecast things, Manson may be on the trading block. If that’s the case the Rangers need to make a push to sign him.