Jimmy Vesey and the NCAA wall 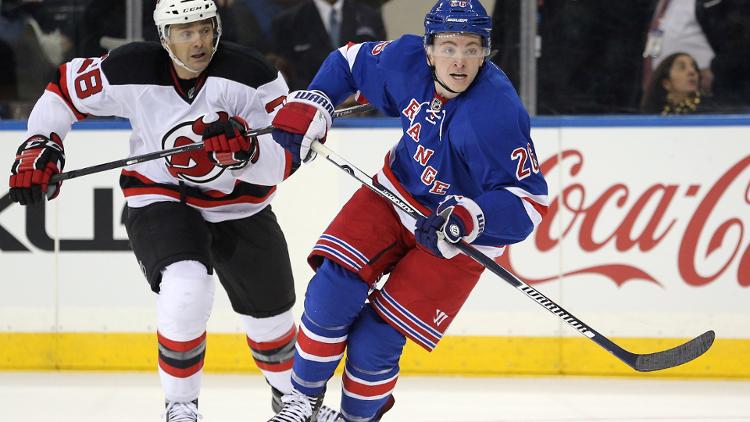 As the prized offseason signing for the Rangers, Jimmy Vesey burst onto the scene in his first month of NHL action. The highly touted rookie put up a line of 6-3-9 in his first ten NHL games, as the Rangers blew teams away to start the season. But as the Rangers dealt with injuries and the scoring regressed to a more realistic pace, Vesey’s scoring has disappeared. In his past 38 games, Vesey has scored just five goals and five assists, a far cry from the near point-per-game pace.

The dip in scoring was to be expected. It’s rare you get rookies that can score at a point per game, and those kids are usually taken in the top-five picks. Vesey was a third rounder and not an elite talent like McDavid or Matthews. Beyond the expected drop off, this is also the most hockey Vesey has ever played. He has played 48 games thus far, and the last time he even touched 40 games was in 2011-2012.

The drop in Vesey’s offense can be attributed to many things. Injuries, scouting reports, fatigue, schedule, and the NCAA wall all have an impact on his recent scoring drought. However the one item that should be focused on is Vesey’s hesitance to shoot. In those first ten games, Vesey took 18 shots (1.8 SH/Game). In the next 38 games, Vesey has taken just 49 shots (1.2 SH/Game). That may not seem like a small drop off, but it amounts to 50 fewer shots over the course of a full season.

If a player isn’t scoring, you expect him to be doing things away from the puck that still contribute to the success of the team. Vesey, despite the lack of recent offense, is doing just that. Despite third line ice time, he’s still scoring at a top line pace per 60 minutes of ice time. Some of that may be skewed from early season success and small sample size, but it’s still worth noting.

But let’s focus on the shots conceded portion in the middle-right of the HERO chart. When Vesey is on the ice, the Rangers concede fewer shots, and Vesey has been contributing in like a top-six winger in that regard. He hasn’t been generating much offensively, but he’s been decent/solid on defense, which helps him contribute to the success of the team.

It’s not all sunshine and daisies for Vesey though, as he was brought in to provide some secondary scoring and he’s barely contributing at an NHL level in generating offensive opportunities. That is in line with what was mentioned above, that Vesey isn’t shooting, and it’s taking away from the offensive success of the team while he’s on the ice.

Rookies go through these slumps. He came in with a lot of hype, that Chris tried to calm. Chris actually called it in his post, stating that come January, he could be running on empty. That’s what happens with NCAA rookies. They hit a wall of fatigue, as they take a little while to adjust to the rigors of an 82 game schedule, almost double what they are used to. But have no fear, Vesey will rebound as he gets used to the schedule. This is all part of the plan.