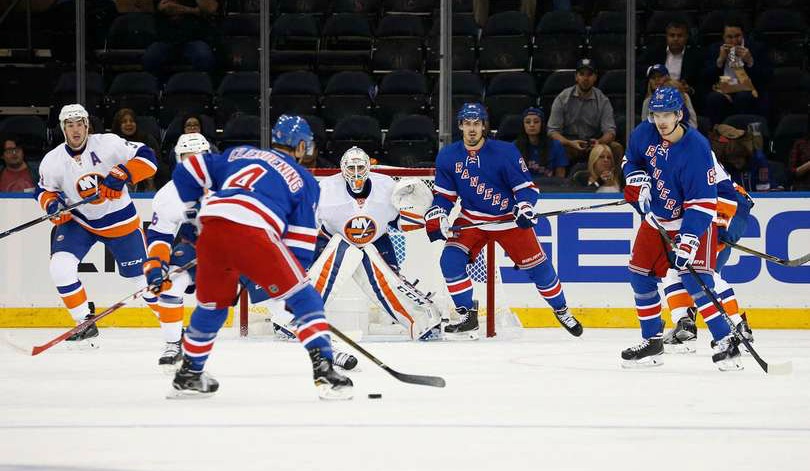 Outside of Dan Girardi, there is no one player that divides the Rangers fan base more than Adam Clendening. Opinions on Clendo seem to be at both extremes of the spectrum, with some thinking he should be given regular minutes and is a solid RD, while others think he’s useless. There seems to be very little grey area in this debate, but the grey area is the best area, since that’s where the truth lies.

Before really analyzing Clendo’s strengths and weaknesses, perhaps it’s best to review both sides of the discussion. Those that want him in the lineup regularly see his skating and puck moving abilities and relate that to a big need for the Rangers. Those that believe he is useless see the flaws in his gap control and coverages in the defensive zone. But the question that draws the most discussion is whether or not Clendo is an upgrade on Girardi and/or Kevin Klein.

First things first: Comparing Girardi to Clendo is a pointless exercise. Alain Vigneault is not going to play Clendo over Klein. That’s it. Case closed. Moving on.

So I think we can all agree that the deployment between Klein and Clendo is basically the same. Clendo is certainly a better skater and puck mover than Klein, but Klein has a reputation of being better in the defensive zone. This year he’s been pretty terrible, so let’s say that at his best, he’s on par with Clendo in terms of overall defensive zone play.

If we can agree there –and I think saying he’s been on par with Clendo is being generous– then we can compare their production without any fear of context skewing results.

So Clendo, despite being a “defensive liability” and having similar deployment to Klein, outproduces Klein in every single meaningful stat. It’s not even close at this point. Clendo certainly isn’t perfect, but at this point he’s a very big upgrade on Klein, even with the miscues in the defensive zone

The numbers give much more value to Clendo than Klein, and comparing them directly shows that even with same deployment and usage, Clendo is producing much better results. Perhaps the most surprising is that Clendo actually limits shots against at a much better rate than Klein. So if Clendo does Klein’s job better than him, shouldn’t he be playing?

Every little bit of improvement helps the Rangers on the blue line this season. It’s clear Klein can’t cut it anymore. So if Clendo can do the same job defensively while bringing a much needed puck moving skill set to the blue line, what do the Rangers have to lose?

*All stats are at 5v5, courtesy of corsica.hockey.