State of the Rangers Goaltending

The state of Henrik Lundqvist 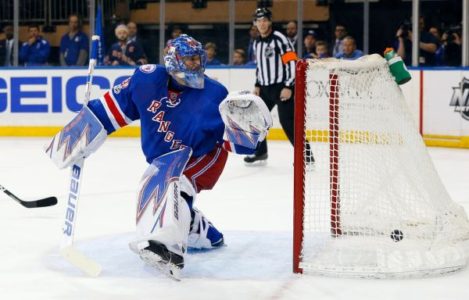 One of the biggest hot button issues surrounding the Rangers this season, and especially during this recently slide has been the struggling Henrik Lundqvist (last night’s solid performance notwithstanding). Larry Brooks even wrote a click bait article (which I’m not going to link to) about the issues in the Ranger crease.

There is no question that Lundqvist has been sub par this season. By any available metric, his performance has been below average, and significantly so when compared to his career performance numbers. In a vacuum, a .902 save percentage is not acceptable for any NHL goaltender, but this is not any NHL goaltender we are talking about.

There is no point in recapping the brilliance that has been Henrik Lundqvist’s career. We all know that story. I think what fans are most interested in is the future performance of their franchise icon. With four more seasons left on his contract once this campaign expires, it is an understandable anxiety.

Since we can all agree that The King has struggled this season, the question moves on to “why” and “what does it mean”. There are several plausible causes for poor play from a goaltender, so let’s run through some of the possibilities.

First, it could just simply be a blip in performance. According to friend of the blog @RickNashTag, Hank has gone through several rough patches similar to this one in past seasons. Through the Dallas game, Hank has given up twenty goals in the previous four games. He gave up nineteen in four twice in 2008 and has given up similar numbers through various stretches of his career. This could just be a rough patch. Emphasis on rough.

Assuming that’s not the case and there is some systemic failure either in execution or decline, the first place to turn is the tire fire of a defense. There is no question Hank has been shaky and let in some uncharacteristically soft goals. However, on a large number of those goals, Hank has been hung completely out to dry. These types of structural breakdowns can certainly be an attributing factor.

Let’s assume for a second that 90% of the goals allowed this season have either been neutral hockey plays or goals that are purely Hank’s fault. Under this assumption, only 10% of the goals allowed can be directly attributable to poor defense (I’m pretty sure we can all agree this is a conservative estimate). If you take 10% of the goals Hank has allowed (8.5 goals from 85 total goals against), and use the adjusted number (78, rounding up) applied to Hank save percentage, his save percentage is right around .912. This is still far from Hank-like, or even acceptable, but it doesn’t paint the doom and gloom picture of the mainstream media using his current stats.

Now, it is impossible to factually quantify, other than a subjective visual assessment whose “fault” any given goal is, as many are an amalgamation of decisions of multiple players. However, given what literally everyone has observed of the defense so far this season, I don’t think it is a stretch to say that they bear a small amount of the blame for the Lundqvist’s putrid numbers on the year.

Before we get to the dreaded “D” word, I do watch to touch on the psychological aspect of the position. Just to be clear, I’ve never met Henrik Lundqvist and have no personal insight into his frame of mind. However, I can play arm chair psychologist by virtue of being a member of the goaltending fraternity and have experienced the types of frustrations that are really unique to goaltending.

We all know that for years Hank has been elevating mediocre teams into contention. After a decade plus of giving everything he has to the team, it may be starting to wear on him. Commenters have pointed out Hank’s body language after goals and draw the conclusion he has given up or is more interested in blaming the defense rather than putting forth a full effort.

I can attest from personal experience that feeling like you are putting in the work to create the best possible product on the ice, it can be immeasurably frustrating to feel like a mental error or an ill-advised decision on the part of your defenders can undo all that hard work. When you feel like you aren’t given a chance to stop a shot or have to stare down a three option play, it creates so much more frustration than a typical goal. At the end of the day, it’s all on you as a goaltender. Your teammates on the ice have a huge impact in your success or failure, but that is not what the box score says.

I’m not saying that the Hank’s psyche is the reason he is struggling, but it does play a part in how you approach a play and your overall confidence, so its impact cannot be completely dismissed.

Now onto the words that no Ranger fan really wants to hear: “is Lundqvist declining”? As Hank approaches age 35, the question will continue to grow louder and louder with every stretch of subpar play. It happened to Mariano Rivera every year like clockwork. No one escapes the call of father time. I think it would be hard enough to determine when full on decline had set in with a neutral blue line, but the defensive ineptitude has really muddied the waters. I really don’t think over the course of one offseason, Hank went from elite to barely an NHL goalie.

The challenge lies in his adjustments. No matter what, what he is doing right now isn’t working. He is jumpy on his skates and is opening up holes that never previously existed. Another friend of the blog, George Ays suggested that Hank’s reflexes may no longer allow him to play as deep in the net as he used to. That may be, it also might not be, but Hank needs to make an adjustment to get out of this funk.

Personally, I would suggest a back to basics approach. It’s time for Hank to recalibrate his approach to the game, stop trying to overcompensate for a faulty defense and simply control what you can control. If he stops the bleeding on low and medium danger shots, he can build his way into hedging against the more difficult ones. It may not be a perfect plan, but it’s a hell of a lot better than what he is showing on the ice currently.

The other possibility is to begin to adjust your crease depth incrementally and try to pick your spots to be more aggressive. It might be a slow transition, but the hedge against decline is going to be important, as well. Especially considering the time remaining on his contract.

With Antti Raanta still injured, Hank is going to play his way through this, one way or another. Let’s hope he can make some adjustments to find his form again. The good thing is he has plenty of time to turn the ship around.


Categorized: State of the Rangers Goaltending