“Lundqvist is bad” vs. “Lundqvist can’t carry the team anymore” 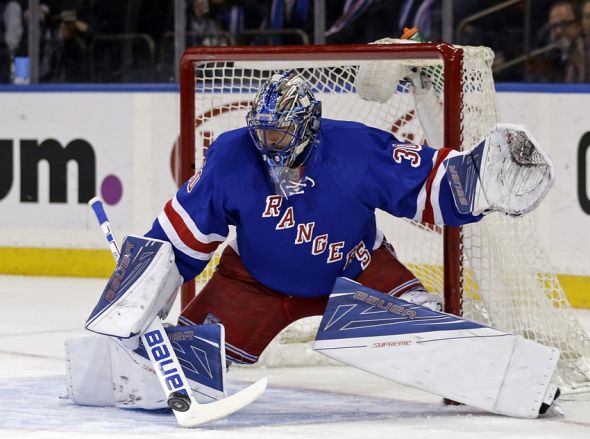 One of the major storylines this season is the apparent decline of Henrik Lundqvist. At 34 years old (35 in March), Lundqvist is at the age where goalies tend to decline, and it seems that goalies do this relatively quickly. It’s fair to expect some level of decline from Hank, but there is a section of vocal fans that think Lundqvist is done.

Let’s be clear: Lundqvist is not having a good season by his standards. His .907 SV% is well off his career average of .920, his medium danger SV% is in the toilet, and Steve Valliquette mentioned on a recent broadcast that he’s letting in unscreened shots through at a much higher rate (I think it was 1-in-23 this year, as opposed to 1-in-40). However there is a difference between “bad” and “not Lundqvist.”

Elaborating on this, it seems that Lundqvist is having his most struggles on shots classified as medium danger, where he sports a league-worst 87.86 SV% on those chances (minimum 500 minutes). He’s also been middle-of-the-road in low danger shots with a 97.39 SV% on those chances (Raanta is at 97.01%). Here’s how this year compares to Lundqvist’s prior three years:

The high-danger save percentage shows that Hank still has the reflexes to make the big save in close. However what has changed is that he’s getting beat more often on shots from outside the home-plate area. From the eye test, it looks like shots from the high slot and faceoff dots are the ones eluding him more, but I have no data to support that.

There are a few possible reasons for this. The first is that Lundqvist isn’t setting himself as well as he used to when opponents tee up shots. That is in line with Vally’s note that he’s allowing more unscreened shots in this year.

The second could be a lack of trust and/or missing his reads, and Lundqvist has admitted to the latter. Lack of trust and missing his reads are not necessarily linked, but there is reason to believe they could be. If he doesn’t trust his defense to stop the pass (which they don’t), he could be anticipating that and getting caught. The only evidence I have to support that is the terrible defensive play and my trust in Lundqvist. There is admitted bias in that last statement.

Worth noting that his workload this year –in terms of pure shots faced– is on pace to be lower than his previous full seasons. Food for though.

There is little evidence to support the “Lundqvist is bad” argument. If his HDSV% were off his career numbers, I’d take a step back. But it appears that Lundqvist is no longer able to carry the team in the manner we have been used to, at least for this season. There’s a huge difference between the two evaluations.

I have the utmost confidence in Lundqvist that he will bounce back, solely because of his HDSV%. That shows his raw skills are still there. I don’t think anyone should be throwing in the towel yet, given the defensive issues that have plagued the team. Rebuilding the trust between goaltender and defense might be the biggest hurdle right now. Pumping the brakes on any Lundqvist doomsday scenarios until the defense is fixed might be the most prudent option.