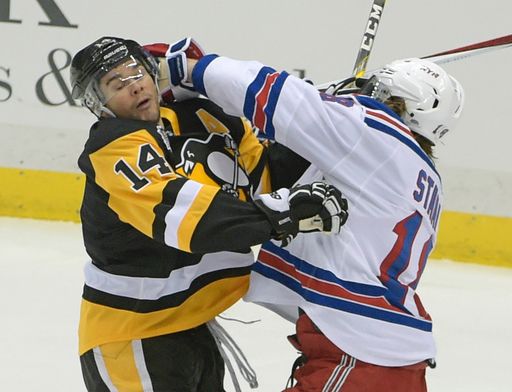 With the recent news that Marc Staal is going to be out indefinitely with post concussion symptoms, the Rangers find themselves short one of their top-four defensemen. Whether you agree Staal should have been in the top-four is a bit irrelevant at the moment, since he was in the top-four regardless. This is going to force Alain Vigneault and possibly Jeff Gorton to adjust if this team is going to make a run at a Stanley Cup.

In fact, it has already forced AV to make a major change to his defense, taking Dan Girardi off the top pair for Brady Skjei. Adam Clendening was naturally in the lineup, and was put on his off-side with Kevin Klein. Dan Girardi moved down to play with Nick Holden, who moved back to his natural side on the left. I personally did not watch the game, but from what I’ve heard, Clendo and Skjei both had strong games in their roles.

Since the injury will keep Staal out for at least this weekend’s slate of games, we should expect to see more of the same for the interim. It takes more than one game to earn a lineup spot or new role, so it’ll be on the kids to earn their keep in those roles.

But long-term is where things get tricky. Klein and Girardi are going to take on more of the defensive zone minutes, which isn’t going to lead to any increased success. With Staal’s history, it’s possible –albeit unlikely– that this injury keeps him out for the rest of the year. Does that change Gorton’s approach to the trade deadline? Does he make a big deal for a young stud 1RD now, instead of waiting for the offseason?

It’s no secret that a good number of fans, including myself, want to see a young 1RD added at the right cost. That last bit is the most important, and there are going to be a bunch of teams lining up to offer the Rangers a defenseman for one of their prized forwards.

But if a big splash isn’t in the cards, then this might move Gorton’s timeframe up for a rental a bit. Some cringe at the term “rental” for good reason, but the right rental at the right price can pay dividends. It’s a little early to start predicting who the rentals are, but Cody Franson is someone that keeps getting mentioned to me on Twitter. He’s a clear upgrade to Klein, but it all depends on the cost.

Even before the injury to Staal, the Rangers needed to upgrade the defense desperately. The potential long term impact exacerbates this need, and may force Gorton to show his hand sooner than he had anticipated. Either way, expect a good number of rumors about defensemen to hit the airwaves as trade season approaches.