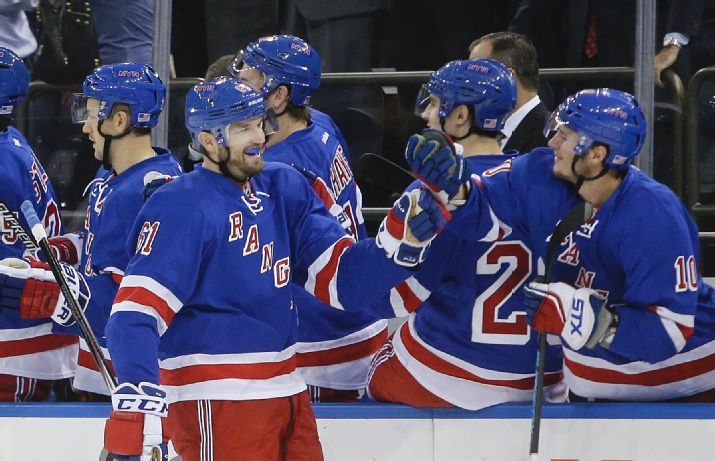 Where do you start with the Rangers top six? If you’re grading the offense as a whole, it’s fair to say you would give the team a strong grade – probably A level.

The Rangers boast an elite (at least statistically) powerplay, they sit second in the league in goals per game (3.4/game) and have scored more goals than every team in the league (144 at time of writing). However, when you break it down, has every player played to his own individual ability?

Nash has driven to the net more and been stronger on the puck than at any other time as a New York Ranger. He has scored goals (13 in 30), has shown more consistency and has been strong in his own end. He has also made an impact on special teams. The problem is, Nash cannot stay healthy. Could he produce more? Yes, particularly when you harshly measure his output against his salary cap. If you take out the injury issues, Nash has had a solid season that promises much in the second half. The Rangers need a healthy Nash.

For some obscene reason, some Rangers fans think Stepan is overrated and over paid. The reality is, Stepan is a great top six center that does a little bit of everything and is a crucial part of the team. When Stepan is on his game, the Rangers are much better for it. Stepan will never be an elite goalscorer but that’s not his role. Quietly he’s flirting with his first 60 point season while matching up against the top lines from other teams. Stepan has played well the past few weeks and is primed for a strong second half.

Zibanejad was well on his way to being a huge, immediate success after being acquired from Ottawa. He started hot, cooled off and then started to find his production again before going down with his leg break. Zibanejad was on course for career high numbers and the Rangers will be much better and more dangerous when he returns. The biggest fault with the young Swede is that he doesn’t hit the net enough despite possessing an elite shot. He also blows hot and cold.

This season has finally been the coming out party for Kreider we have all waited for. Kreider is having his best and most consistent year, even if there is still room for yet more. Kreider has taken over some games and has been a more consistent force with and without the puck. He’s finishing at a career high rate (15.8%, career average of 13%) and he should shatter his career bests if he stays healthy and continues on his current trajectory. Kreider obviously possesses an elite total package and if he keeps developing, the Ranger get (and stay) healthy then the Rangers – thanks in part to Kreider- will have a lethal attack. Is Kreider on his way to being the Rangers best forward?

I have been a little disappointed with Zuccarello. At times he’s displayed his elite vision and playmaking ability, he’s been the sparkplug the Rangers are used to enjoying and he’s a difference maker when he’s on his game. This year however he has been a bit streakier than usual, has disappeared in games and is on course for a dip in production unless he has a strong second half. Above all, Zuke has struggled to finish this year and is on course for his weakest year in three. On a team that has struggled to stay healthy, you could reasonably expect Zuke to habe stepped up and at times he didn’t. While he’s been snake bitten, he has been much better recently and his line has carried the Rangers before the bye week.

Miller has had an up and down season, but with more highs than lows. A torrid start, he and Kevin Hayes carried the Rangers offensively to begin the year and he should easily set career highs across all major categories. Seemingly on a shorter lease with Vigneault than every other forward, Miller has made mistakes, has overplayed the puck at times and has been quite streaky. What cannot be denied however, is his effort, his ability to excel without the puck and he’s also grown into a strong special teams player. Hayes and Miller may be one of the leagues most dangerous penalty killing units, seemingly generating shorthanded chances on every kill. If Miller can keep refining his skill set, make better decisions and continue to grow offensively Miller has regular 60 point upside.

With the multiple injuries to the forwards, the movement up and down the line-up of Miller, Vesey and co. it’s quite hard to do a set top six report card. Vesey, Hayes, Pirri, Buchnevich and of course, Michael Grabner have all spent time in the top six.