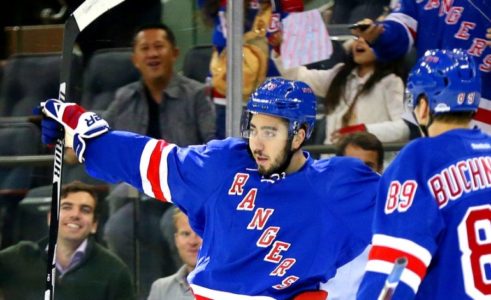 The Rangers have gone 8-3 in their last eleven games, which is obviously a good thing. However, there has been some really bad process along the way. I don’t think there is any question at this point that the Rangers are most definitely a playoff team, but the bigger concern lies in their ability to win a seven game series with the likes of the Penguins and Capitals.

At BSB, we analyze performance on a game-by-game basis, while trying to identify good and bad traits in what is happening on the ice. We also like to take macro view of overall production and trends, which can hopefully be predictive of future performance and adjustments that need to be made for sustained success. I suppose what makes analyzing this stretch of Rangers’ hockey frustrating is the injuries to several key forwards, namely Rick Nash, Mika Zibanejad and Pavel Buchnevich.

At this point, we know the defense needs an upgrade in the worst way. Barring an act of pure magic by Jeff Gorton, we are likely looking at a fairly incremental upgrade, given the understandable resistance to giving up an NHL forward in a deal for defensive help. The question we ultimately need to answer is: if Lundqvist continues to progress to career norms, can his high-level play and the depth up front mask the defensive issues well enough to truly contend?

This unfortunately cannot be answered accurately in the wake of the aforementioned injuries. Nash has been in beast mode all season. Zibanejad has brought an element both at 5v5 and on the power play that the Rangers have not had in quite some time. He is a right-handed triggerman that draws attention away from his line mates every time he touches the puck. Buchnevich, while initially struggling to find the back of the net, has displayed all the creativity and skill that made him so highly touted coming out of the KHL.

Make no mistake; these three are all top-9, if not top-6 players for a team with Stanley Cup aspirations. It has been a testament to the forward depth constructed by the front office that the team has been able to weather these injuries as effectively as they have. Sure, we complain when the process is brutal versus a bad team and they eke out a win. However, sometimes we lose for forest for the trees when players of this caliber sit in the press box.

With all three skating again (albeit on different time frames), the Rangers will be in a much better position to determine how aggressive they need to be pursuing a defensive upgrade when the offense can be analyzed comprehensively. With all the missed time, it is still difficult to handicap what the ultimate capability of this team is, as currently constructed, but hopefully the picture becomes a little clearer in the coming weeks.

Until then, it is a bit frustrating to watch the team play down to the level of their opponents and hemorrhage shot attempts left and right. Unfortunately, we have to reserve judgment on the current stretch of play until the team gets three of their most important forwards back.