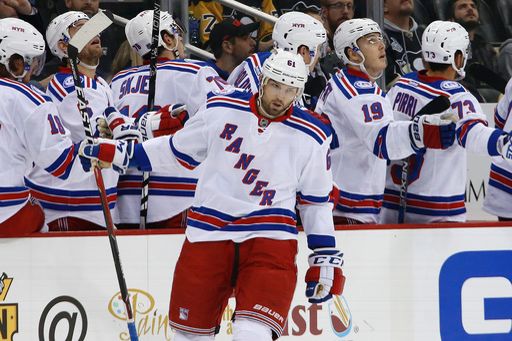 It’s been a bumpy few games for the Rangers. First they allowed touchdowns to Pittsburgh and Minnesota, then they needed to rely on two sloppy goals against a backup goalie on a mediocre team in order to right the ship. After a few weeks of strong defensive play, they regressed back to their old selves. It wasn’t pretty, and I have some thoughts.

1 – I’ve been harping on this for a while, but if it isn’t clear to you that the Rangers need an upgrade on defense, then please tell me why you disagree (politely). The effort against Ottawa was atrocious, and fast forwards will continue to burn the likes of Kevin Klein and Dan Girardi on a regular basis. It’s no coincidence that playoff teams like Pittsburgh can basically score at will against the Rangers. They need to get some mobile defensemen that can get sticks in lanes and force the rush to the outside.

2 – In addition to an upgrade, it’s time Alain Vigneault gave both Klein and Girardi regular rest. Adam Clendening is far from a detriment in the lineup, and has a skill that the Rangers sorely need in his ability to move the puck up the ice. He’s not a savior, but he’s capable of playing one out of every three games in a rotation with Klein and Girardi. Even if the benefit is giving the two vets a break and perhaps adding a half step to their game, it’s worth it. Both have skating issues that are getting exacerbated by exhaustion.

3 – The forwards are certainly struggling for consistency. It’s contributed to the recent defensive woes. But I will wait to judge more harshly until they get Rick Nash, Mika Zibanejad, and Pavel Buchnevich back from injury. That’s three top-nine forwards. Their injuries are forcing Matt Puempel and Marek Hrivik into everyday roles. It’s also forcing the club to toy with Jesper Fast as a scoring forward. Those injuries have created a major imbalance in the lineup. It puts players who were producing in bottom-six roles in top-six roles, which in turn draws tougher matchups, which impacts production.

4 – People will jump through hoops to defend a declining fan favorite, going as far as blaming every goal on either Antti Raanta or Henrik Lundqvist. Hank hasn’t been his Hank-self this season, but he’s come around lately. He always has slow starts. Raanta had a great start, but is slowly coming back to backup levels. But here’s the rub: If both goalies are allowing a ton of goals –and one of them is a top-three goalie in the league– then it’s a problem on the defense and allowing high quality chances.

5 – The schedule in December was certainly tough. But let’s remember that every team is going through this kind of schedule due to the World Cup and the bye-week. The Rangers have played 13 games already this month, with two more coming. That’s 15 in 31 days. But looking at January, they have four sets of back-to-back off days, with a pair of five-day breaks on top of that. They play just 13 times in January. Sorry, but the schedule is not an excuse for poor play.

6 – But speaking of that schedule, it brings me back to point number two. With that kind of condensed December schedule, shouldn’t Vigneault want to give some of his veterans rest? Why weren’t Klein and Girardi getting a breather more frequently? It’s clear they needed it.

7 – Addressing the toughness question – sure the Rangers could use someone else who can deliver a big hit. But that cannot be at the expense of skill and speed. Chris Kreider is the perfect example of this. If the club wants to get someone who can throw the body around and also, you know, play hockey, then by all means go for it. I draw the line at checkers that don’t play hockey.

Some questions for you all: