The strange state of the New York Rangers 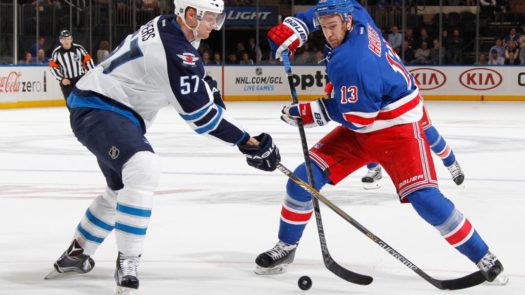 The Rangers are in a weird spot right now. Still riding their hot start, they remain tied for the second highest point total in the NHL, with a comfortable playoff position and league best goal differential. On the other hand, they are only 5-4-1 in their last ten games, they are missing four (!) top nine forwards and have seen their shot differentials trending in the way wrong direction.

So, how are we currently supposed to be feeling as Ranger fans? We know the defense has not been up to snuff. Henrik Lundqvist has not been his usual self so far this season (sidebar: I plan to do an analysis shortly about why exactly that is) and the Rangers ability to create offensive chances can be stifled with conservative neutral zone tactics. Yet, despite all this, they are having (overall) success. Now, the old analytics argument is starting to rear its ugly head again on regression versus fan enjoyment, but there are a lot of moving parts here. Let’s break it down a little.First, let’s talk injuries. Rick Nash is out with a groin injury. Jimmy Vesey has an upper-body injury. Pavel Buchnevich is recovering from back spasms and Matt Puempel has a concussion. These are all shorter term injuries compared to Mika Zibenejad’s broken fibula and 6-8 week estimated return. Make no mistake; these are significant pieces of a lineup that has been built to outscore opponents. Very few teams could absorb losses at this level and have the depth to maintain a high level of play.

The defense has long been a sore spot amongst commenters and analysts despite the Rangers hot start. I think it has become a fairly accepted reality that the team needs an upgrade in its top-4. Kevin Klein has slowly (or not so slowly) been declining, and Marc Staal and Dan Girardi provide marginal value, at best. Ryan McDonagh has been a revelation once again, and Brady Skjei has developed far faster than any of us imagined. I’m not really looking to comment on Nick Holden at the moment (I’m not a fan), but he has been as advertised. A RH, middle-to-top pair upgrade is more or less a necessity for a serious Cup run this season.

Goaltending has also been a bit of an issue as of late, with Henrik Lundqvist really not looking like his usual self. Antti Raanta has acquitted himself well in limited time, but The King needs to be at the top of his game to weather the current roster storm. After eleven plus seasons of elite production, I trust that Henrik can regain his typical form before long. No, I don’t think this is the start of decline, I think he is just in a funk. Either way, the goaltending needs to be better going forward.

There was an article posted the other day at FullTilt NYR that caused a bit of a stir between the analytics advocates and their more traditional counter-parts. The question posed was whether the analytic side of the game has taken all the fun out of watching it. For my money, the question is misplaced. The traditional argument is that the statistics are simple outputs that don’t encompass what is actually happening on the ice. The issue with that concept is that, as the game evolves, the stats can be translated to more traditional concepts of on-ice performance.

For example, evidence has accumulated showing us that controlled zone exits and transition passing from defensemen positively impact shot differential, possession, scoring chances and ultimately, success on the scoreboard. We can see that when Girardi and Staal are swatting pucks into the corner instead of controlling and transitioning, that it leads to prolonged defensive zonetime. We know this is not a recipe for success. Sure, it can be fun sometimes to watch your team eek out a win in a game they have no business winning, but to make yourself willfully ignorant to the fact that there is an underlying issue with the team’s performance just so you can feel better watching the game seems silly to me.

I know, I know, I am digressing. The overall point, I suppose, is given the current state of the team, how are we supposed to feel about their current performance? I obviously can’t speak for anyone else, but I feel like the team still desperately needs an upgrade on the blue line and just needs the forwards to get healthy. I think Hank will sort himself out, just give it some time. Hopefully they can weather the storm of this compressed schedule without some of their big guns. It should get much easier once the calendar flips to January. Hopefully.