Being honest about Alain Vigneault 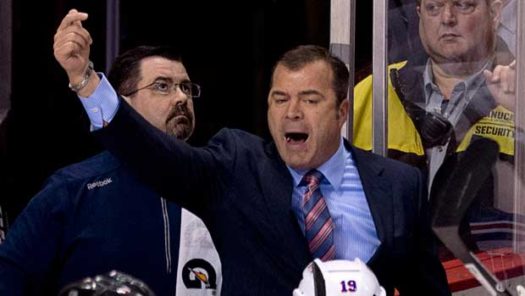 The Rangers are slipping. It’s no secret to anyone who’s watched the team these past couple of weeks. Poor defensive play and a lack of execution on the rush –and some teams figuring out how to stymie the Rangers’ game plan– mean that the team has either barely squeaked by when they’ve won games (Philly) or gotten totally hammered (Buffalo). Situations like this are always multifaceted in that there’s never one main issue with the team that, if fixed, would suddenly make them Stanley Cup contenders, but one issue that needs to be discussed at this point is the coaching.

Let me be clear: I am not advocating for the firing of Alain Vigneault. What I am suggesting however is that it’s time to be frank about his time as the New York Rangers head coach and take the good with the bad. Yes, he has gotten the team within a few games of a Stanley Cup, but coaches can’t only be evaluated on their achievements, they also need to be evaluated on their shortcomings.

With that in mind let me also say that evaluating a coach is one of the hardest things to do in hockey, with their influence on the on-ice result being diffuse and indirect. It’s difficult to statistically quantify the job a coach is doing (miss me with W/L please) and so I’m inherently uncomfortable passing judgment on a coach. There’s so much that we don’t see, so much that goes on behind the scenes, that it’s inherently risky to make broad statements about a coach’s performance in that role.

Nonetheless I think it’s time to be honest with ourselves. AV has done a great job as a coach in some respects, including getting the most out of offensive players like Rick Nash who would’ve been limited by someone like Torts, as well as the aforementioned Stanley Cup Final appearance, but he’s also done a poor job of coaching the team through adversity. We saw this last year when the team struggled – he failed to adjust. We’re seeing it happen again this year.

Coaches are most crucial when a team is going through a tough time, and what we’ve seen from AV suggests that he doesn’t plan on changing a thing, or worse, that he doesn’t even think the Rangers have played poorly. This should start to raise red flags about the guy as a coach and is something that management needs to address at some point. By the looks of things they either haven’t, or he isn’t heeding their directives.

Another important caveat is that I realize that practically any coach, even the best coaches, have their one fatal flaw. We can see it around the league, and there’s a reason why coaches in the NHL tend to last only a few years at any particular team, successful ones included. Firing AV at this point in the season would be a mistake, because the only real replacement out there (not counting coaches within the organization) is Gerard Gallant. Still, there needs to be some pushback from the media and from management with regards to the job that AV is doing.

I realize a lot of this is slightly alarmist, given that just a few weeks back we were talking about how the Rangers are the real deal when it comes to capitalizing on scoring chances, and given that it’s only been a couple of weeks’ worth of bad games. Still, that’s a decent amount of bad games, and coaches are often defined by how they react in times of adversity. In that regard it may be time to come to terms with the fact that AV is significantly limited as a coach, especially with respect to his defensive evaluation, and may in fact be holding this team back in some ways.

Rangers fans need to square with the reality that part of AV’s legacy as a coach will be his inability to innovate in difficult situations, just as much as his stellar record and many achievements will be. Criticism of the way in which he struggles to adapt and makes the same mistakes habitually is not unwarranted or lacking in perspective. It’s simply being honest about AV.