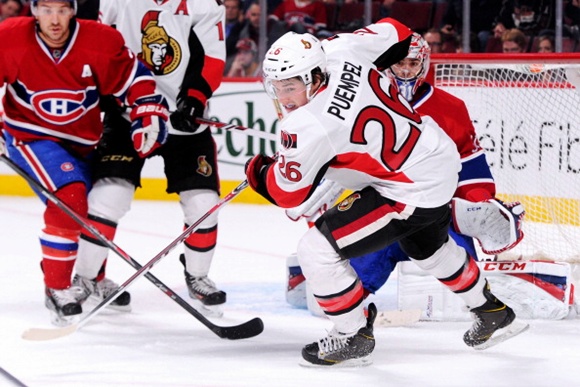 Yesterday, the Rangers made a surprising little move by claiming the 24th overall pick in the 2011 Entry Draft, Matt Puempel. Without trying to make this more complex I truly see some good signs regarding this transaction, so lets get to some musings that have sprung from the waiver pick-up.

First and foremost lets get to the semantics, a couple of weeks ago the Rangers terminated Calle Andersson’s contract. In theory, Puempel just takes his slot and the Rangers still have a few spots open for trade flexibility or UDFA signings.

One thing that is also worth at the very least briefly discussing is that the Rangers just made a statement that they prioritize skill over grit and intangibles, at least on offense. We are starting to see them slow down a bit, largely attributed to the defense’s inability to move pucks out of the zone. But I believe they are truly taking pride in their fast style and will continue to build their team in this image. Puempel being picked up off of waivers, instead of calling up Tanner Glass, can even have the most pessimistic Rangers fans feeling a bit calmer that speed and skill are being prioritized for the forwards.

Puempel is truly a no risk transaction by the Rangers, I was originally more focused on his NHL impact but the Hartford Wolfpack may reap the benefits of his play if things don’t go well in the NHL. The Rangers are at the end of the waiver wire priority list, so most NHL clubs passed on him. It’s a fair assumption that he would clear waivers for the Rangers. Surely Hartford would love a guy who has shown to be a pretty nice producer at the AHL level.

If Puempel produces, then the Rangers would have a lot of options to work with. Oscar Lindberg is already starting to look expendable with the play of Josh Jooris.  If Puempel impresses, you have to feel that it is only a matter of time until Lindberg can be packaged with someone like Kevin Klein for a defensive upgrade.

So what’s the deal with Puempel? As a young prospect, he was always seen as a wonderful playmaker although he hasn’t been able to truly put points up in the NHL. But a little bit of digging into his advanced stats can show us that at the very least, he likely won’t be an anchor. This season Puempel played mostly with Chris Neil and Chris Kelly, yet he is 54.5% in shot attempts% so far this season. Not bad considering his linemates.

On top of being a good playmaker, he also has a quick shot. Makes you wonder if he will be able to put his skill together on a line with Brandon Pirri and Jesper Fast, which is light years better than his situation in Ottawa. According to Corsica.hockey, Puempel hasn’t been on ice for a goal at 5v5 this year. I’d venture a guess that this is largely due to those linemates. there is a void of offense there, making it pretty hard for a rookie forward with good skating to produce.

I spoke to a few people who watched him quite a bit in Ottawa, for the most part they said he is ok although it would be hard to imagine him getting a solid roster spot with the Rangers. That is fine for what the Rangers need, at this point he will provide some necessary depth. He will allow Boo Nieves to continue getting top line time in Hartford, and if the Rangers get lucky then it’s a home run. This is truly a low risk transaction that is already bringing the organization some rewards as they get to keep their options open.