Can J.T. Miller keep up this pace? 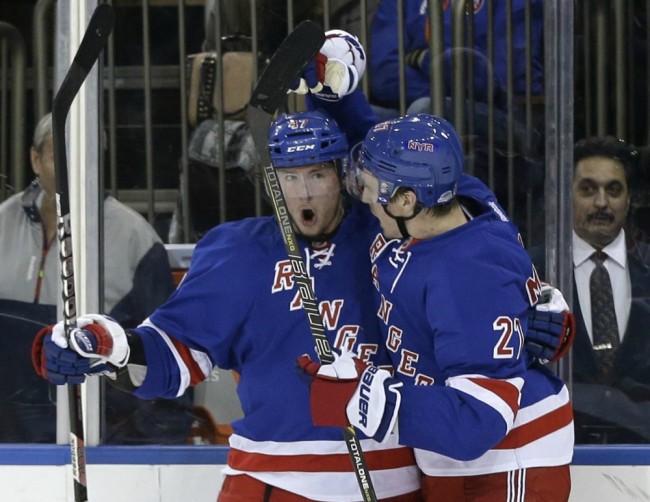 J.T. Miller has been a bit of a revelation for the Rangers this season. Viewed by some –including myself– as the best trade chip to try to upgrade the Rangers defense, Miller has taken this and basically shoved it back in our faces. I’ve never been happier.

Through 17 games, Miller has a line of 7-10-17, leading the team in scoring. He’s bounced between the top three lines, showing he can play anywhere in the lineup and on either wing. And he’s done all of this primarily at even strength, with just one PPG and one PPA to his stat line thus far.

It’s not just on the score sheet that we see Miller’s solid play thus far. He’s more engaged in the offensive zone, cutting to open space and creating opportunities for himself and his linemates. Speaking of those linemates, he’s played at least 50 minutes with four different forwards (Hayes, Grabner, Zuccarello, Zibanejad). His versatility is something that gives the Rangers the ability to tinker with lines without much negative effect to his play.

But perhaps it’s his play without the puck that is the most improved aspect of his game. I’m cherry picking one play here, but he has significantly improved his back check:

This was a phenomenal play, and just one of many instances where we see Miller –and to be fair, all of the other forwards– showing a renewed vigor for defensive play.

As for his underlying numbers, there is a little cause for concern that he may not be able to keep up his PPG. For starters, he’s shooting 18%, which is a bit high for someone who is not considered an elite talent. His career average is 12.4%, so we should expect his goal production to dip a little bit. I’m not saying Miller is guaranteed to have this happen, just saying that we shouldn’t expect him to finish the season at an 18% shooting rate.

Also of a little concern is his CF%, which sits at 45.3%, good for ninth among the forwards. This suggests that Miller’s line spends more time in the defensive zone and isn’t necessarily generating a ton of shots towards the net. However his CF/60 (49.45) is seventh on the club, while is CA/60 (59.71) is eleventh on the club. Long story short: It appears that Miller and his linemates still generate a bunch of chances, but can be prone to getting pinned in the defensive zone.

That last point seems contradictory to my prior point about improved defensive play, but one can improve and still have more room for improvement. It’s why Miller, at just 23 years old, is such an intriguing player. This year could be a huge improvement on last year’s 22-21-43 line, with more development to come.

Which brings me back to the original question: Can Miller keep this up? In a word, no, I don’t think he’s going to finish with 82 points on the season. However a 25-goal, 60-point season isn’t out of the realm of possibilities. Is that the definition of keeping it up? Perhaps. I don’t expect him to be a point per game guy, but 60 points is still top-line forward production. All signs point to another career year for Miller.