Small system change all the difference for Alain Vigneault’s Rangers 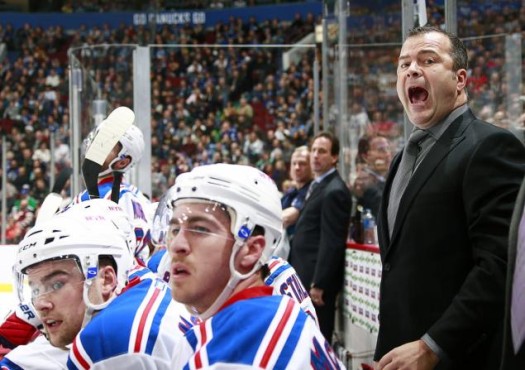 The Rangers have been a marvel to watch this season. After a significant upgrade at forward, the Rangers are steamrolling opponents to a top-three in the league 57% scoring-chances-for (SCF%) rating. The league leading 62 (as of this writing) goals scored are also pretty nice as well. But perhaps the biggest difference is the defensive zone play.

Last year, the Rangers hemorrhaged shots from all over the defensive zone, putting up some of the worst Corsi (quantity) and Scoring-Chance (quality) numbers against we’ve seen in a while. It was a two-part problem. The first was personnel, which was going to be almost impossible to fix. The second part was system based, which required an adjustment by Alain Vigneault, something many thought to be impossible based on the comments across the blog and Twitter.

Fast forward to today, and we have a slightly tweaked system that has enabled the Rangers to get the most out of the roster. It’s well known that the Rangers play a hybrid overload/man coverage in the defensive zone. Last year, the defense played man and chased all around the zone, including up to the blue line. This year, the defense only chases their man to the faceoff dots before releasing.

It’s a small change, but it has made all the world of difference. The defense, to which skating is not a strength, can now focus on the slot area and stick their man in the high priced real estate. The forwards, overloading along the boards to outnumber the opposition, focuses on the outside areas and forces turnovers. In this small adjustment, the Rangers are able to continue to put pressure on the opposition while still limiting high quality chances against.

Here’s just a taste of what we saw last year:

On this goal against Carolina last year, Jeff Skinner was left alone in the slot. It’s a little tough to see from this angle, but you can see that the forwards were out of position and both Rangers defensemen went to the same man.

Here is another miscommunication against the Penguins. Marc Staal had his man, and Dan Boyle went to go block a shot from outside the dots. No one picked up Matt Cullen in the slot.

These are just two examples of goals where a lack of communication led directly to goals. The right guys in the slot weren’t picked up, and it led to very easy tap-ins for the opposition.

Now we have this year, and instead of rehashing what I said above, I defer to Jack Han:

The first 30 seconds covers defensive zone play, where Jack highlights that the Rangers have put more of the onus on the forwards to carry the defensive load. AV made things simpler for the Rangers defensemen while playing to their strength of fast and skilled forwards. It’s a small adjustment, but it’s paid huge dividends thus far.

As Jack stated, we don’t know if this is sustainable at the moment, but right now the Rangers are flying, playing to their strengths, and hiding their weaknesses. These are all positive things that make the Rangers a scary team to play against.