The run of wins and goals was bound to end, but many didn’t expect to end like this. The Rangers laid an egg against a terrible Vancouver team, giving up five goals to a team that managed to get shutout four times in five games a week prior. The Rangers were slow and possibly fatigued, as they seemed to play down to their opponent all night. A strong effort by Jacob Markstrom helped doom the Rangers to their first real clunker of the season.

But on the humorous side, even with a loss the Rangers got three goals, so Papa John’s is inching closer to going broke. Rick Nash got his 400th goal as well, so there’s that. The Rangers have three days off now before their Western Canada road trip, so I’d expect them to regroup and be rested for that run. Losses happen, even ugly ones.

Kevin Klein made a solid play in the defensive zone to disrupt the Canucks, leading the Rangers to transition up the ice. Brady Skjei got it to Jesper Fast as Pavel Buchnevich cut to the net. Fast made a beautiful pass to Buch for the goal. Credit Skjei for cutting to the net as well, drawing the attention of two Canucks defenders and leaving Buch to get behind them.

You could tell the Rangers were gassed at the end of this shift. Nick Holden was on Henrik Sedin along the boards, and couldn’t get to the slot to assist Marc Staal with Loui Eriksson. Daniel Sedin got position on Jesper Fast, which gave him room to get the puck to Eriksson. Buchnevich also slow to get to the slot.

Henrik with the jack-in-the-box goal, after the Rangers turned it over in the offensive zone.

This is pretty. Rick Nash got his 400th NHL goal.

Antti Raanta was forced to leave the game after getting run over by Mikael Granlund, forcing Henrik Lundqvist to come in cold. Mika Zibanejad then turned the puck over with an errant pass off Alex Burrows’ skate. That led to a scramble in front, which led to Hank on the ground while Burrows was able to chip it into the empty net. Lundqvist didn’t play the initial shot well, but that’s likely due to being cold. That was the first shot he faced with no warmups. Either way, the turnover led to this developing.

Ryan McDonagh couldn’t glove the puck at the blue line, leading to Bo Horvat and Sven Baertschi on the two-on-one. Dan Girardi with the snow angel which didn’t work.

The Rangers got a bit lucky with the bounces on this one, as their rush was broken up, but the puck eventually bounced to Zibanejad, who put it over Markstrom. 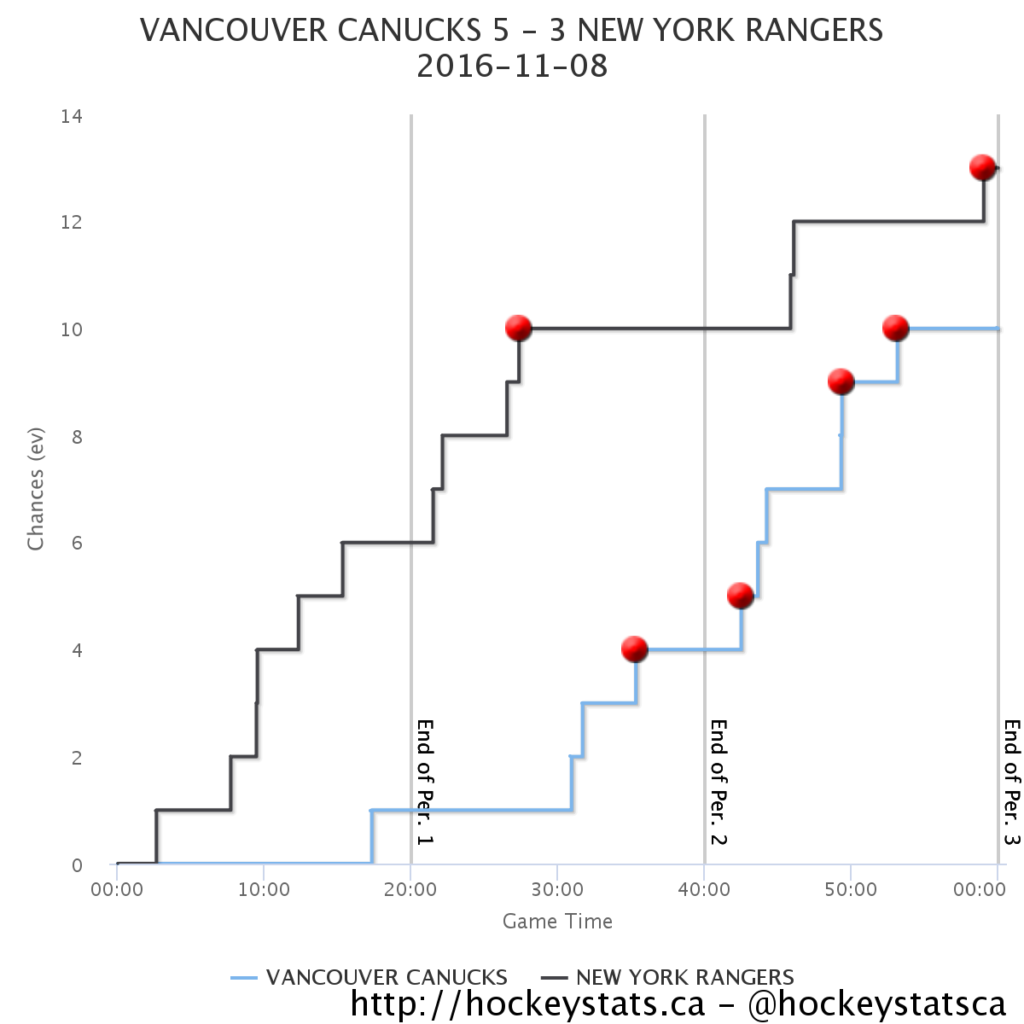 The Rangers actually had the majority of the scoring chances, but couldn’t really use their speed to get them. The Canucks did a good job of neutralizing the Rangers’ speed as well. 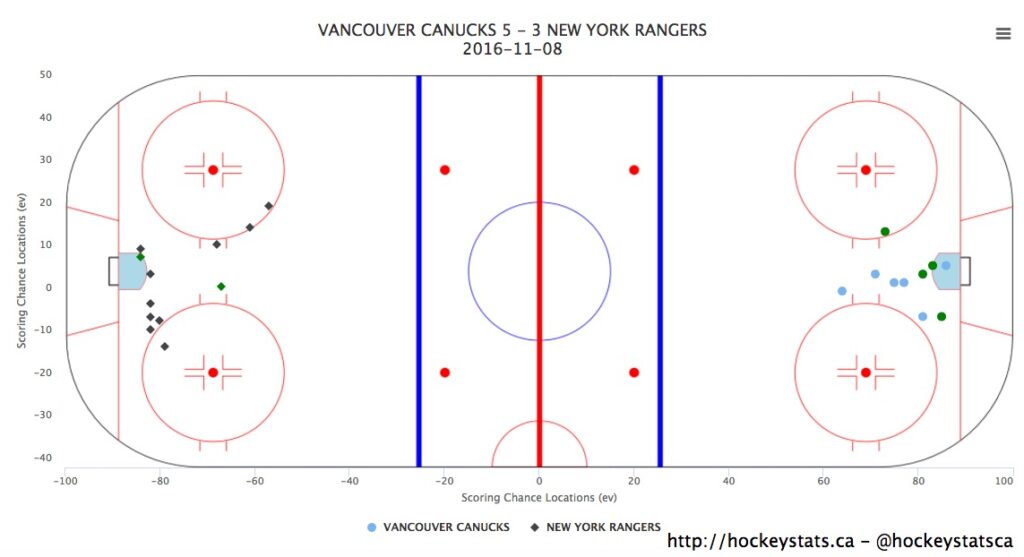 The Blue Shirts got a good amount of chances in high scoring areas, just couldn’t convert.

The Rangers gave away two points last night, but now have a chance to rest up before their road trip. Hopefully they learn from this game.