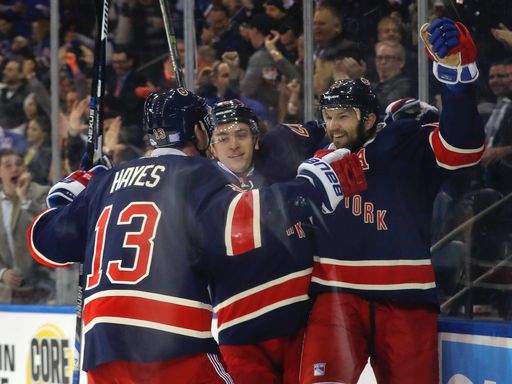 In case you missed it, the Rangers are off to a pretty solid start. Not only are they winning games, they are completely dominating opponents. It’s a welcome change from last year, where goaltending was keeping a mediocre team above water. Speed and skill throughout the lineup has put significant pressure on the opposition, and the Rangers are capitalizing.

While much of our focus on stats is at even strength, since that is where the majority of the game is played, special teams play is critical to the success of a potential Cup contender. Last year, special teams –specifically the penalty kill– crippled the Rangers. They couldn’t consistently score or generate offense on the powerplay, and were Swiss cheese on the penalty kill.

This year, it appears much has changed.

Here is PP/PK shot attempts for/against, aka how well are you doing what you're supposed to. pic.twitter.com/wRgJQZ1HGS

From the above from Carolyn Wilke (another must follow, sensing a trend yet?), the Rangers have been absolutely killing it on special teams. They are generating a boatload of attempts on the powerplay, while the penalty kill has been reformed into what we’ve expected it to be by pressuring opponents and limiting shot attempts.

We’ve seen both units with their improvements at work too. The additions of Mika Zibanejad and Brandon Pirri to the powerplay have given the Rangers pure shooters from the top of the circles, opening up things down low. With Zibanejad, the Rangers can run their 1-3-1 the way Washington does, with Zibanejad teeing it up whenever he gets the puck.

On the penalty kill, the addition of Michael Grabner has helped the forwards pressure the puck carrier, which has led to more clears and shorthanded chances. Healthy defensemen are also helping drive the success.

But perhaps the biggest change is overall execution. As with the improved DZ execution all around, the penalty killers are not running around like chickens with their heads cut off. They are cutting down on Royal Road passes, which in turn is making shots easier to save for Henrik Lundqvist.

It’s easy to look at the Rangers’ recent success and point to the even strength numbers. However special teams have played a large role in the improvement of the team. Through ten games, the Rangers are firing on all cylinders at all strengths. It’s still early, but the positive signs are there.