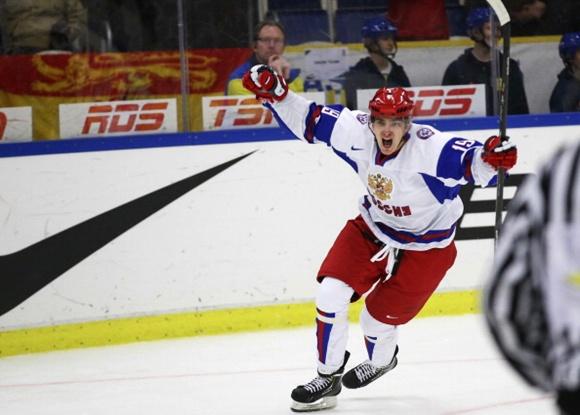 Hockey season is right around the corner. But before pre-season, we will get to see prospects duke it out in the Traverse City Tournament. While the tournament is always fun, the Rangers haven’t been overly competitive the past few years. The issue has been the lack of prospects, and while there is some sweet talent coming in –Kovacs, Stromwall, Buchnevich, Gilmour, to name a few– I am certainly more excited this time around than last year.

While certainly not a big deal, I love when the club invites players non-roster players. You don’t need all of them to succeed, but if you’re scouting staff is good maybe you find someone that can become an NHL player. Last season, the Rangers had 11 invites, a major step up from 2014 (5) and 2013 (7).

One thing that remained constant with these invites is that the team did not have a single NCAA invite. I assume that is because technically, NCAA players cannot participate with any pro type game outside of a prospect camp (without paying their own way), so this list will not include any players who will be returning to the NCAA this upcoming season.

Possible locks for the roster

The first step to look into possible invites is to first look at which actual Rangers prospects will be going to the tournament. After signing Jimmy Vesey, I think the forward group will be the deepest in years.

This doesn’t include Ahti Oksanen, who may not be available due to his shoulder injury, and one of my favorite picks from this summer, Ty Ronning. I see both those guys respectively rotating with Chapie, Joly, and Gettinger. Essentially the only thing I see on forward open for invites is either another center or just a scoring winger to provide more options. From a quick glance on paper, this forward group seems very likely to be a force in the tournament, with a lot of depth and talent at this tournament level.

Defense is where it gets hard. I would assume the Rangers will be inviting defenseman but the weird thing is, if you remember the development camp in late June, the club only had seven defensemen and just two invites. One of them was Turner Ottenbreit (will get to him later), who was here last year, the other was Ryan Yaremko, who will be an NCAA player this year.

As for locks, only Sean Day, Sergey Zborovskiy, and John Gilmour appear to be set for the roster. Maybe Troy Donnay and Calle Andersson, even though they played in the pros last year. Clearly the Rangers have to be making a few invites on defense as they have anywhere from 3-5 spots open for the tournament roster.

While the goalie position is set at the prospect level, the roster spots for the Traverse City Tournament is up in the air. I wish Adam Huska (NCAA bound) would be a sure thing to be at the tournament because I loved him in the WJC. Brandon Halverson is likely to be the starter, but I don’t think Mackenzie Skapski needs to be there and Tyler Wall is also NCAA bound. There will be invites here too.

Alexis D’Aoust – For the rest of this post I will call him AD. AD is by far one of my top choices for not only receiving a camp invite but also a possible minor league deal. At 20 years old he can either go pro or go for his overage year in the QMJHL. Personally, I prefer adding him to the ECHL and seeing how he performs there.

AD went undrafted for the last two years, which confuses me. He has a nice mix of solid skating and willingness to go to the net. AD was fourth in points during the regular season in the QMJHL, with 44 goals and 54 assists (39 primary assists). The RW may never end up being a top line player at the NHL level, but skill set and size gives me hope that he can potentially be a solid third line scorer.

Kyle Maksimovich – While AD can be playing for an AHL deal, someone like Maksimovich can be playing for exposure. At 18 years old, Maksimovich went undrafted this summer even after producing 71 points in 68 games for the Erie Otters. The thing that held him back was his height at 5’8″, but the talent level is certainly there to take a look at in a somewhat meaningless tournament. Here’s how he progressed throughout the season in the OHL: 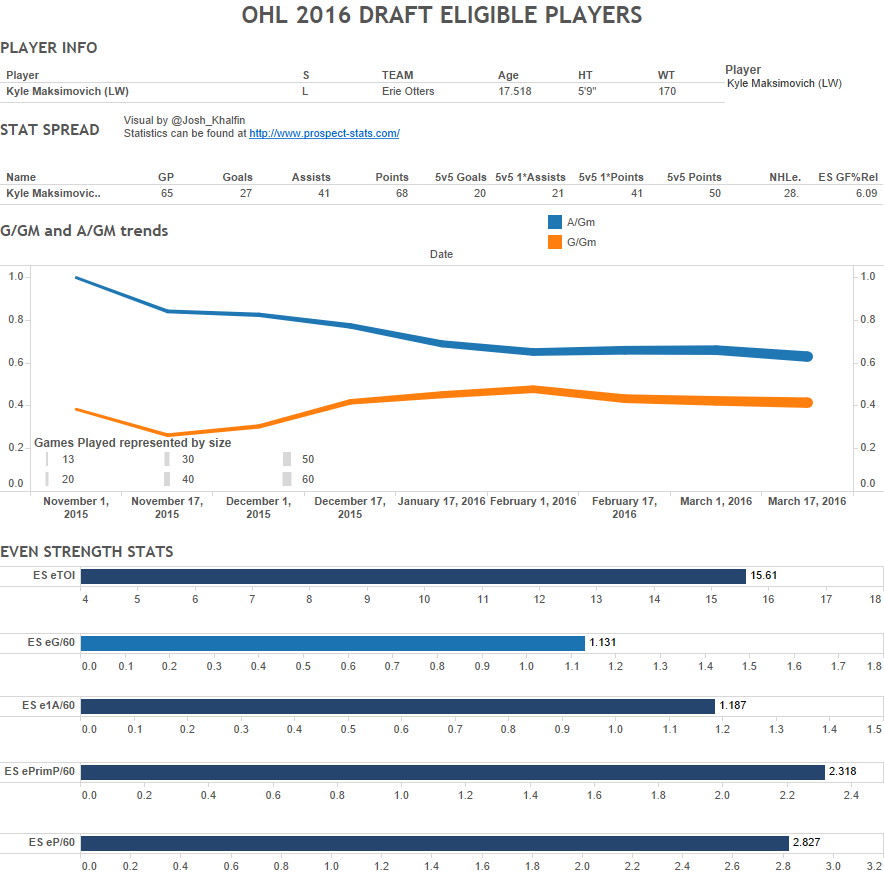 Hayden Verbeek- If the Rangers are looking at centers as invites, the gritty nephew of Pat may get one. The hard working, defensively responsible center had a tough start to his OHL career, but the 19 year old is a teammate of prospect Tim Gettinger and former teammate of Brandon Halverson with the Soo Greyhounds. This is someone the Rangers are familiar with.

Cameron Askew – He was an invite last year to the tournament and in my opinion while he didn’t impress, certainly didn’t look out of place which is fine for a UDFA. Askew is a big 6’4″ power forward center who is a project. I spoke to his father last year and he said Askew has practically become a gym rat and will plan on working on his skating. Fast forward to this season and Askew not only improved on his acceleration but also saw a nice 20 point increase in his season totals. It is totally normal for the NYR to want to keep tabs on a player who has shown improvement and with likely one spot available I don’t see why they wont come back to a somewhat familiar option.

Darren Raddysh – Raddysh is one of two players that I can really see the NYR giving a look at during the tournament. The right handed defenseman and assistant captain for the Erie Otters likely won’t be an offensive guy, but he is one of those cases where being a leader and hard worker on a top team likely gets him a contract in the near future. The Rangers likely need a person who can eat some minutes on the right side if they want to try to win the tournament, I feel that Raddysh can be part of that.

Olivier Galipeau- The second of the players I really see the Rangers inviting. If his name sounds familiar it is because he was one of my draft targets last year. Galipeau bounced back from an off year to one where he was an option at pretty much every situation for his team as a first time captain. The left handed defenseman still likes to play a physical game but seeing his point totals nearly double after going undrafted is certainly nice to see from him.

Here’s how Galipeau and Raddys compare, side by side: 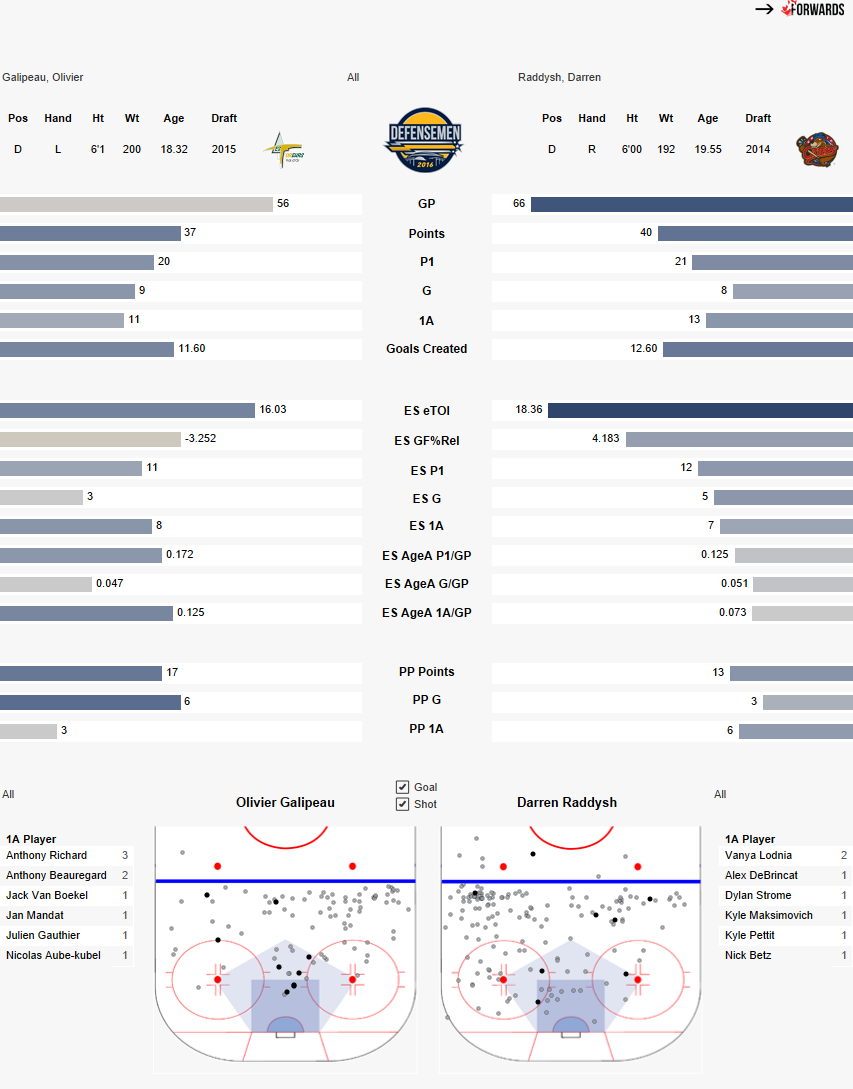 Dmitri Osipov – The big Moscow born right handed defenseman is a polarizing player. He is by no means a point producer, only hitting 12 points in each of his WHL seasons with the Vancouver Giants, but his physical defensive game is actually not overblown. His GF%rel is not bad at all for a player who doesn’t score much, and it’s a testament to his defensive play. Watching him shut down opponents at Traverse City could be fun.

Osipov usually has very nice positioning and likes to throw the body in order to separate player from puck. Osipov doesn’t have a great long breakout pass but he is quite adept at using the small quick passes out of the zone to help facilitate the breakout. I wouldn’t call him a great skater, but for 6’4″ he certainly isn’t terrible. He has great acceleration and once he gains speed is tough to stop while he carries the puck. He does need to improve on his stride, though.

Luc Deschenes- Another tough right handed defenseman who likes to throw the body, last season Deschenes began to add another element to his game on offense. He always had a hard shot and could skate the puck out well when he was younger, but a lot was attributed to how big he was compared to the other players. Now most players have caught up to him and he wasn’t able to standout. The raw talent may still be there and for a team with a shallow right side I certainly won’t be against trying him out.

Loik Leveille – While only 6’0″, the 223 lb right handed defenseman is one of those “do it all” players for his team. The Cape Breton Screaming Eagle defenseman is a fine skater who also has swift hands and passing to begin breakouts. He plays a lot of minutes on both ends and is the perfect player for the Rangers to not only tryout at Traverse City, but maybe with an AHL deal in the near future. He is coming in for his final year at the Q and while he hasn’t dominated he has done a little bit of everything. His ability to begin the breakout and skate is something the Rangers sorely need.

Here’s how Leveille compares to Frederic Allard, a third round pick in this year’s draft (Nashville). 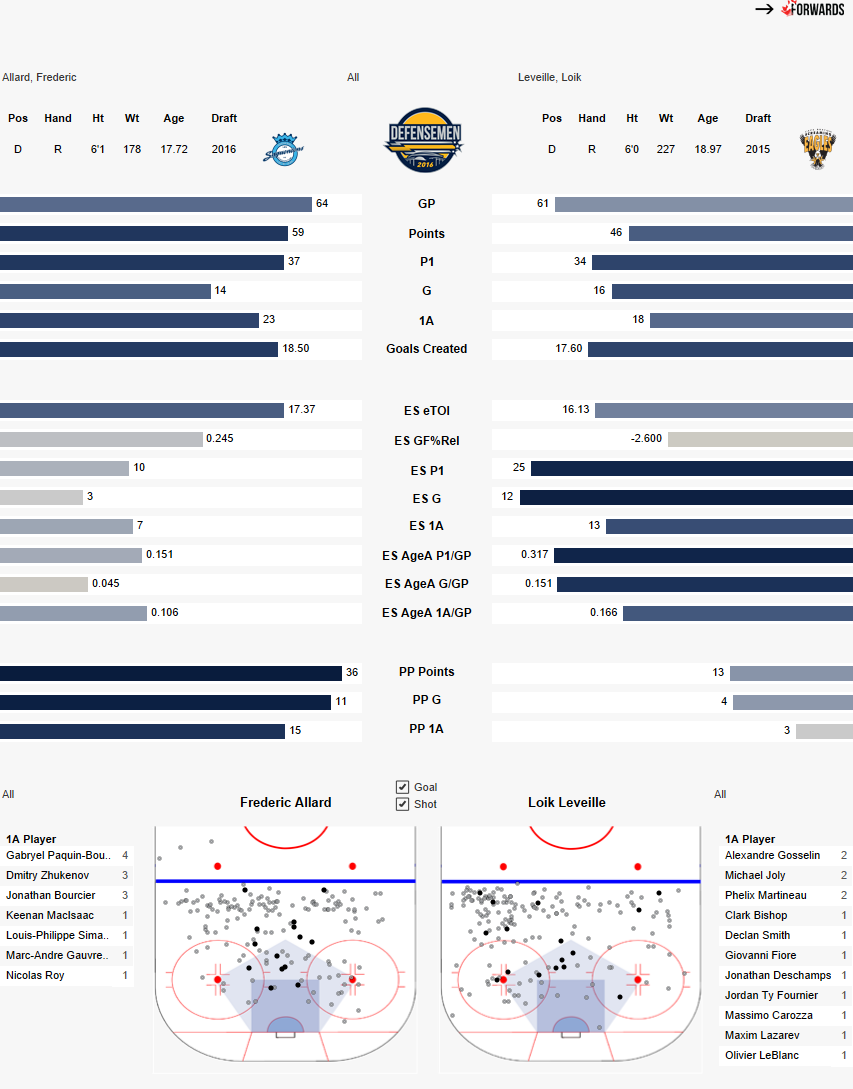 Honorable Mentions: Jacob Neveu, Joe Gattenby, Turner Ottenbreit (I don’t really like him as much as other players mentioned, but I feel like with the Rangers showing a lot of interest at numerous camps he will be an invite).