State of the Rangers Forwards

Could the Rangers trade Mats Zuccarello for help on defense? 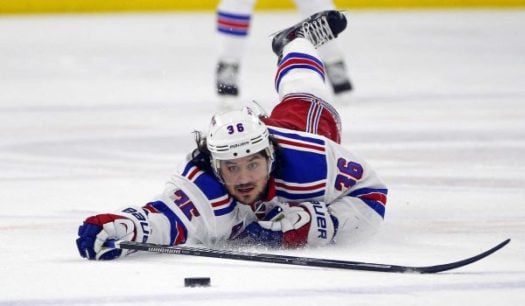 Now that the Blueshirts have pulled off another late-summer coup and added coveted prospect Jimmy Vesey to their lineup for the coming season, the club is loaded with forwards and many are wondering if the next domino to fall is a deal for help on defense.

But though the Rangers are well equipped to trade from their excess depth, finding a trade partner will be no easy task. This late in the summer teams have basically assembled the rosters they intend to bring to training camp. Adding free agent scraps is one thing, but making a blockbuster move at this point is extremely rare.

You can point to the Derick Brassard/Mika Zibanejad trade as evidence that teams often discuss moves for weeks and months ahead of time before consummating them, but though the Blueshirts may have floated some hypothetical scenarios, they couldn’t have known that they’d ultimately land Vesey and be in this position.

The popular thought all offseason has been that the team could unload Rick Nash for a standout blueliner – be it Kevin Shattenkirk or one of Anaheim’s slew of blossoming youngsters.

But though Nash remains a star caliber player, he’s also now 32 years old, coming off a disappointing and injury-riddled season, possesses a modified no-trade clause and carries a lofty $7.8 million cap hit with even more dollars actually owed to him.

At base level he’s still a player that all 30 teams in the league would love to have on their roster. But given those factors, the list of teams that could actually pull off a move for Nash is very short. And finding one of those that is able to part with a D-man that would improve the Rangers might be just about impossible, even if New York greases the wheels by eating some of Nash’s salary.

So what other options does the front office have? Well, clearly there has been a concerted effort to get younger up front – so it seems highly unlikely the Blueshirts would part with one of the RFAs they’ve just re-upped. Heck, Chris Kreider and Kevin Hayes were part of the allure for Vesey to join the club to begin with.

Mika Zibanejad and Derek Stepan are building blocks and not going anywhere, and the free agents the club just signed – Michael Grabner, Josh Jooris and Nathan Gerbe have very little value. Jesper Fast and Oscar Lindberg could probably be had, but neither would bring back a real impact player.

There’s one more possibility – and it’s an awful one for many to even consider: Mats Zuccarello.

Obviously Zuccarello is a huge fan favorite and an important player to the roster makeup. But he’s about to turn 29 and not as much of a part of the organization’s long-term plans. He’s also on a very reasonable contract with three years remaining at a $4.5 million cap hit – that’s a figure that would be much easier to match with the cost of a D-man the Blueshirts might hope to acquire.

Now as with Nash, dealing Zuccarello would create some problems for New York on the ice. Zuccarello is a vital cog to the power play – which is already a major question mark with Derick Brassard and Keith Yandle gone. Zuccarello is also probably the team’s top proven playmaker – and where the club once had way too many pass-first players, that’s now more of a rare luxury. So it’s not as if moving Zuccarello for defensive help is a no-brainer, but it’s worth weighing the cost-benefit analysis.

Moving Zuccarello would result in fan riot regardless of the return, but Jeff Gorton’s job is to make tough decisions and improve the roster any way possible. At this point, dangling Zuccarello on the trade market might be his only realistic option.


Categorized: State of the Rangers Forwards