Superstar expectations in the Big Apple 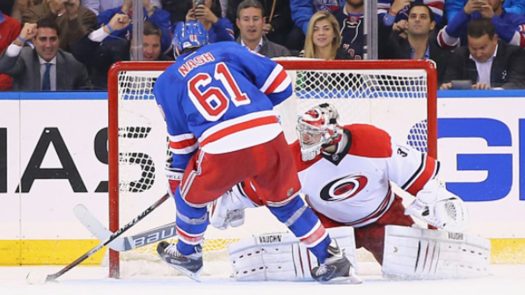 With the spectacle this past week of Alex Rodriguez taking over the sports world, it was hard to not take notice of the superstar legacy that was (is?) his career. Since this is a hockey blog, the details are unimportant; the point here is that, whether you like him or not, he will go down as one of the best to have played the game. And for most of his career, not even at his natural position.

So you may be asking what this has to do with said hockey blog. Great question, friend. While thinking about Rodriguez’ infamous career, it brought about a lot of questions about sports and icons in general. The idea of him going out as a pariah is a joke, but that speaks more to the institution of the MLB and the club that didn’t protect him than anything. How about other guys with talent flowing out of their every pore and their public persona?

It’s human nature as Rangers fans to inherently hate certain great players: Alex Ovechkin, Sidney Crosby, Martin Brodeur. These players are loved by their home bases because, like it or not, they are so talented and make the game so much fun to watch.

What may be unique to large market teams (New York, Toronto, and Montreal specifically) is the idea that it is okay to be so tough on your stars, it borders hating them. I’m guilty of this myself: I demand perfection for every dime being paid, especially in hockey where you’re subject to a cap, and find myself dissatisfied when I don’t see concrete (read: goals) results. Of course, the man I’m alluding to is Rick Nash.

I’m not alone in the Nash camp, either. However, this is a product of being a superstar whose production has declined over the years. The Nash highlight reel goals are few and very far between. Having knowledge of pure talent like that makes it difficult to forgive a perceived lack of production from him.

The issue here, of course, is that he does still produce. We just expect Herculean figures strictly because in New York, you need not only to be perfect, but you need to be a good guy and “try hard” (see Hayes, Kevin). A nonchalant attitude is only okay in specific cases, “just because.” There is no logic, and there is no formula for why this is: it just is.

This is where the flow of this post came from, for what it’s worth. In New York, particularly in the Bronx, “winners” were more deeply valued than pure talent. This, of course, is relative to Derek Jeter and Rodriguez in baseball, and although there is no specific comparable in current Rangers-land, it does have to do with those players who “try hard” over the “lazy” but talented players we choose to vilify.

It’s rare to find a player who thrives on the kind of pressure from large markets that is necessary to thrive in a sometimes brutal market. Derick Brassard was one, a player who, at his best, was inconsistent in Columbus, but came alive under the bright lights of Broadway. Though Nash doesn’t seem uncomfortable, per se, he certainly doesn’t feed off the often unforgiving and loud fans at the Garden. It’s for this reason alone — and I don’t believe it’s a good reason, for the record — that I was expecting him to be moved this offseason.

We’ve seen this happen with Phil Kessel in Toronto and PK Subban in Montreal, two very difficult large markets in the hockey world. Oddly enough, though Kessel follows the narrative we’ve been discussing, Subban seems to be on the other side; he was almost too big for a large market. He didn’t fit in to the team culture, a fact that was made abundantly clear just after the trade to Nashville.

Kessel, of course, won the Cup in Pittsburgh, and Subban has already begun embracing Nashville, which is a really fun hockey town. It would be nice to see Nash raise the Cup in a Rangers sweater, but one has to begin thinking if that’s a reality given the perceived lack of chemistry between him and the city that doesn’t sleep.