Musing the Rangers: Looking back and ahead 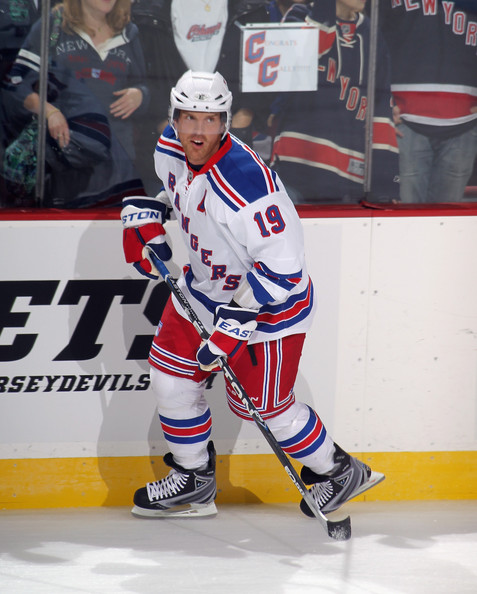 Thanks for some good memories Brad.

For the low season there is a fair bit of news floating around and quite a bit involving the Rangers. It’s been a while since I mused, so let’s take a look at Rangers goings on and also some of the news from around the league.

News broke Wednesday night that Brad Richards announced his retirement via an NHLPA announcement. If you forget about the awful contract the Rangers gave him, Richards had a great NHL career (15 years, 932 points in the regular season) and was an absolutely solid Ranger. 151 points in 210 regular season games was no bad achievement in a league with ever dwindling offense.

Richards was a solid playoff performer for the Rangers, at least in his first year when he was close to a point per game and the Rangers had such a magical run. Again, the Rangers didn’t see the best of Richards but he was solid – including two seasons with at least 19 points on the powerplay. Richards can be proud of a fantastic, Cup winning career.

Reason to be excited: I cannot wait until Robin Kovacs is NHL ready. I can’t help thinking the Rangers have another mid round draft steal on their hands. With the lack of obvious, can’t miss young talent at Hartford’s disposal, Kovacs will be given every opportunity to load up on ice time and put up good numbers in the AHL next year.

Stop it with the Shea Weber bashing

I get that PK Subban is a stud, a popular superstar and a likeable personality and is generally deemed better than Shea Weber at this point in their respective careers. However its obscene that Weber is talked down as much as he has been recently. Happy to debate this, but Weber is still a top ten defenseman in the entire league and with a little luck, in the right situation he’s still a Norris Trophy contender. Contract aside, he’d be welcomed by all 30 teams in the NHL.

Dave wrote about the submitted arbitration numbers on Wednesday. I have to admit, I’m pleasantly surprised how reasonable the numbers were. If the Rangers can re-up Kreider long term at around the $4.5m mark it could be great business. Even if Kreider ‘only’ hits 25 goals on a regular basis, in this day and age, a regular 25 goal guy for 4.5m is great value. Bear in mind that Kreider – so often labelled inconsistent – only needs to pot an additional 4 goals to hit 25.

If they have to, the Rangers should slightly overpay Kreider to get him on a long term commitment. We’ve seen teams pay for potential and for the upside and, Ranger fan bias aside, there are not many players in the entire league that have his overall potential package. Imagine in year three of a deal paying around the 5m mark and Kreider breaks out with a 40 goal season. Whether’s he’s flattered to deceive or not, he’s worth the commitment.

I absolutely love that Phil Kessel took the Stanley Cup to Toronto. I have a deep intense dislike for the Pens – like most Rangers (and non-Pens) fans – but you have to love Kessel for doing that.

Obviously it’s signing season for restricted free agents. Tampa GM Steve Yzerman addressed another of his needs in getting solid top nine winger and playoff performer Alex Killorn on a team friendly 7 year deal with a cap hit of 4.45m per year. Too long? Sure. Too expensive? Not really. Like Kreider, if Killorn merely averages 40 points per season his deal will not be a bad one. Yzerman has become the best GM in the league right now. The Ryan Callahan contract aside, has he made a truly bad decision since assuming control?

Are you looking forward to the next lockout?

To contradict the above point, GM’s have once again tried to find loopholes to abuse the cap and to fill needs in free agency. Some of the deals dished out have been ridiculous and we’re clearly headed toward another lockout. The worst part? Players such as Henrik Lundqvist could be robbed of an additional shot at a cup.

This coming season the Rangers could be enjoying a bargain year from Mika Zibanejad, particularly if he beats his previous career highs (21 goals, 51 assists). This offseason, one particular player worth monitoring for the Rangers and is Sean Monahan of the Flames. Monahan has put up better numbers than the newest Ranger up until now, with back to back 60 point seasons. Monahan is looking long term this offseason and is expected to get somewhere in the region of 6-7.5 million on a very long deal.

Right now, Monahan isn’t a comparable for Zibanejad – Monahan has achieved more at a younger age. If the Rangers new number two center has another career year and eclipses 60 points next season (which all Rangers fans hope – and what seems at least in the realms of possibility) then Zibanejad could be looking at 6 to 7m on his next deal. It’s easy to see why the Senators got scared when projecting the money it will take to keep Zibanejad long term. He’s projecting up.

When scanning the likely (and current) Ranger roster, I’m trying to be realistic with my expectations. Pavel Buchnevich could have an epic rookie campaign and Brady Skjei may make us forget about all the defensive woes that plague the Rangers, but who will be the next guy to really cement himself in the core?

If you can count a third year pro as a ‘breakout candidate’ I have high hopes for a bounce back season from Kevin Hayes even though I anticipated the team maybe using him as a trade chip, even going as far as advocating it in the right deal. IF he stays (which is looking likely), there’s no reason Hayes can’t give the Rangers his first 50 point season. He averaged less than 14 minutes last year, a paltry 1:30/game with the extra man. If Vigneault looks for more balance in his line-up and Buchnevich acclimatises quickly the Rangers should have three scoring lines. I think 50 points is absolutely within Hayes’ reach – with a more consistent effort.

It’s been a long musings today, for which I do so humbly apologise. I haven’t been able to contribute a lot recently so please excuse my ramblings. On to Question time…