Recap of the 2016 draft for the Rangers 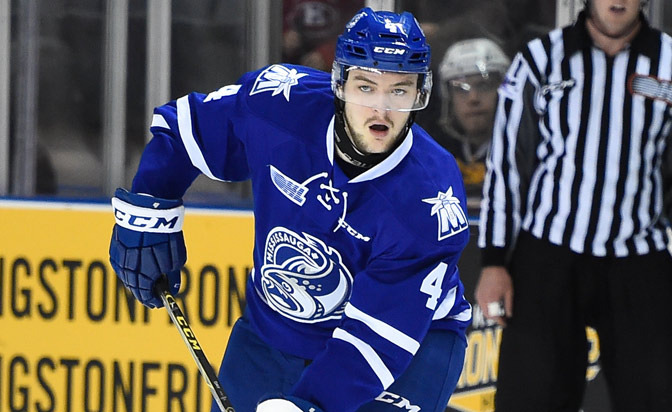 The draft is finally over and we can begin traveling to the next checkpoint in this franchise’s 90th year in the NHL. First and foremost, sorry if the post may be a little late. I decided to let all of the picks settle in before I talk about them. Not only does that let me do more research and write with a leveled head but it also prevents any knee jerk reactions. I feel that this is very important because it would be pretty messed up to be harsh to a 17 year old on one of the biggest days in his life.

About the draft in general, it seemed like the Rangers lucked into some teams choosing goalies early, giving them more skater options to choose from.  Considering the depth in net for this team, that was pretty wonderful. Also while I am happy with the picks, there are some guys that I wished we still drafted considering that they were available. Guys like Dmitri Sokolov,Vladimir Kuznetsov, Sebastian Aho, and Maxime Fortier.

Gripes aside, this draft gave me a lot of hope, as the Rangers are truly one of the best in drafting after round three over the last few years, especially when they go with the philosophy they had this year over the 2014 draft. Hopefully they realize not only the overwhelming support of this philosophy –drafting for skill and talent opposed to size and need– and its benefits, but also realize that they truly are a great drafting team.

Sean Day- I discussed him in one of my target posts and the Rangers hit all the points that I expected them to. His skating truly is phenomenal and something that can help him get to the next level. The biggest thing that stood out to me when Jim Cerny of Blueshirts United interviewed him was how he talked about going to the gym and eating dried fruits/more meat and less carbs. He cut his body fat from 19% to 12% over the last couple of months. This is great to hear, it sounds like the player is truly getting committed to reach that next level after almost being handed everything earlier on in his life.

A lot of people’s concerns with Day is his “drive” and while I may be just optimistic, I think getting drafted may be the necessary inspiration to continue working. When given exceptional status, he knew he was going to get drafted. Now he is at that stage, he understands he needs to work to get to the NHL and I am confident that he will. One of my favorite things was when he talked about how happy he was that the Rangers selected him. Day’s skating and two way game are superb, he has the raw talent to be a top 4 defenseman if he puts it together.

Tarmo Reunanen – Tarmo was seen as a reach, but his low ranking was probably due to being injured for most of the year. Due to this injury, I wasn’t able to see him play at all so I won’t pretend I have a scouting report on him. That said, Reunanen is a puck moving defenseman, someone this team sorely needs in the prospect pool. This is a guy who can begin the breakout with ease. He’s also a solid skate, adding to his effectiveness in breaking out and creating chances.

Due to his injury there is not a lot of information on how his defensive game has progressed, but I would assume given his age, like most defensemen would need some work. That is fine, we can hope he develops and can use his skating to be tough to play against one-on-one. I’ve read that Tarmo is also a bit feisty and not one who will just give the puck up in a boards battle.

During the 2014-2015 season, Reunanen had very similar stats in the same league with the 5th overall pick of this year’s draft, Olli Juolevi. This is important because I want to see if Reunanen gets picked up in the CHL import draft. I would absolutely love to see what an organization like the London Knights can do for him; or maybe even the Kelowna Rockets which just constantly produces good defensemen prospects. It is expected for Reunanen to play next season in Europe but as was the case with Daniel Bernhardt last season, it may be something to keep an eye on.

Tim Gettinger – I know for some this may be your favorite pick. The massive 6’5 left winger is an interesting case and probably the Rangers’ project pick of the year. The issue with Gettinger is that he was “underwhelming” by most accounts by a few scouts. Many pegged him as a 2nd round pick early in the year because of his combination of size, skill, and skating. Only hitting 39 points however did not do him any favors as he obviously dropped to the 5th round.

I spoke to someone who watches Gettinger and the Soo Greyhounds regularly to try to get more information on Gettinger. He said that he was unfairly tagged as this possible first or second round pick because of his size and skill, so he wouldn’t have been seen as such a disappointment if they rated him as what he actually was a potential third or fourth round guy. He said that Gettinger does have skill that may catch people off guard. The issue is that he is not overly physical for someone his size and may need to identify the kind of game that he is best suited for playing.

In my opinion, without trying to get overly excited about a 5th round pick, players his size take a while to get used to their body at his age. The learning curve may be longer but hopefully it will get there. The team is expecting him to keep getting stronger and keep getting better as he gets older. Once that happens he can absolutely explode into a quality player. Gettinger is constantly learning and improving, and at the worst he can be a Brian Boyle type player if he makes the NHL. The chart below shows how he progressed through last season 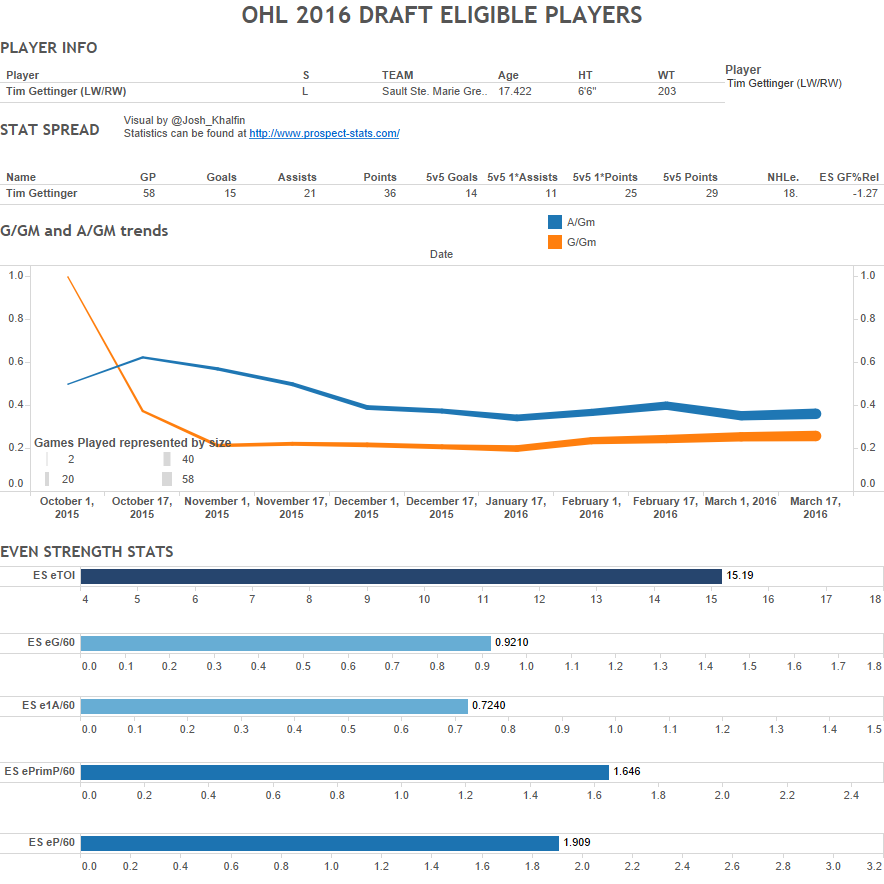 Gabriel Fontaine – Tenacity and intelligence. That is the name of the game for Fontaine. I do not like that as a 19 year old he wasn’t able to produce that much in the QMJHL –and it may become a pressing issue– but the other things he does, well he does them very well. Fontaine is one of the best defensive forwards in the entire Q and was given the task to be the shut down guy for the QMJHL champions the Rouyn-Noranda Huskies. Fontaine uses his speed and smarts to be a major cog in not only the penalty kill but also the forecheck.

As I said he is tenacious and willing to do whatever it takes to win. Although his offensive stats aren’t great in the regular season (45 points in 63 games), he was way more productive in the playoffs with 16 points in 20 games. Before the draft I decided that “my” QMJHL team would be the Huskies (good program, awesome dog) so I hope to be able to get a more concrete report on Fontaine when I can watch him some more. I truly do love how smart and active Fontaine is. He has a long way to go and it would be great to see him improve offensively, but if he does he has all of the makings for a fan favorite.

Tyler Wall – I will not pretend that I know goalies, but Wall brings up a few points that I want to address. People may be confused about why the team took a goalie and I admittedly was too, I really wanted us to take one of the prospects that I mentioned earlier. The Rangers have great depth in net as well, but then I thought about it some more and became pretty content with this pick.

The Rangers have arguably one of the best goaltending coaches in the entire NHL, taking at least one goalie now in each of the last four years provides Benoit Allaire with a lot of projects. Each of these goalies must have raw talent and something Allaire must love to see early in a career. This way he can try to make the best possible pro that he can out of them. Hopefully, at least one will end up becoming a quality starter in the NHL, so there is nothing wrong with stockpiling a bunch of them who all play in different areas to let develop.

Wall, who obviously has the name to be a Vezina winner 15 times in a row, will be playing in UMass-Lowell for the next four years. That gives him four years of development time in a solid program. while we have other goalies in the NCAA as well, AHL, KHL and maybe one getting ECHL time just to give him playing time. In regards to Wall himself, he had an absolutely dominant season in the GOJHL.

Since I do not know much about Wall, I decided to DM him on twitter to just find some things out about him. Wall says he is a big goalie who likes to use that to his advantage, I assume to cut angles. He also plays a very relaxed game, showing great poise in net. His favorite player by the way is Ed Belfour.

Ty Ronning – This guy has all of the characteristics to become a favorite prospect among the Blueshirts faithful. Although he is small at 5’9, Ronning is truly a steal in the 7th round. He was seen as a possible 3rd or 4th round pick by many final rankings, but his size and injury two years ago probably led to him sliding.

That said, him being able to rebound from that injury plagued season to score 31 goals in his draft year is promising. It is also worth mentioning that the Vancouver Giants aren’t exactly a great team, so Ronning’s production is hopefully a sign for more good news eventually as he develops.

Ronning plays with speed. He is a quick strike player who can get to the scoring areas and use his accurate shot or nice hands to get the puck on net. The issue with small players is getting the puck or protecting it from the large opponents. That is null and void when the smaller player simply wants the puck more, and Ronning definitely tries to get the puck 1000% of the time.

Quick snippet, I’ve seen people compare him to Johnny Gaudreau, the only similarity is the size. Gaudreau definitely plays a more creative and offensive game than Ronning. I haven’t watched Ronning a whole lot this year but he reminds me more of Ryan Callahan offensively than Gaudreau.

If you are a long time fan Ronning’s most comparable player is his own father Cliff. Many scouts say that Ty is practically a splitting image on the ice. I take it from my dad that this is good news. 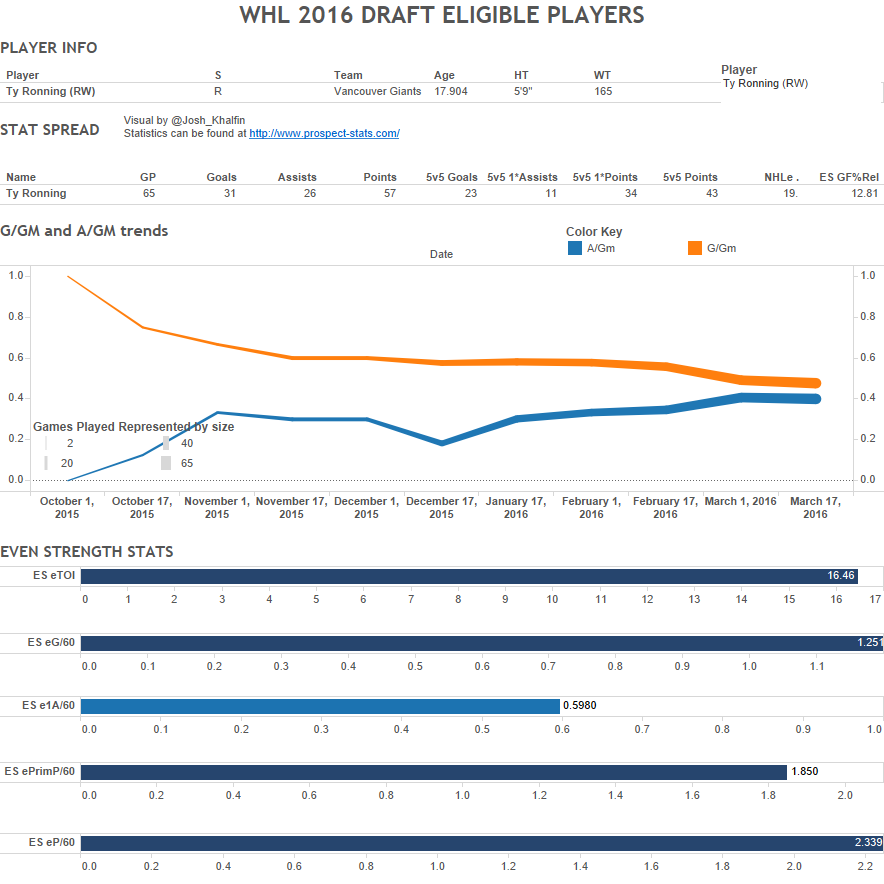 I really love this pick, I have attached my trend visual to this post and the thing that sticks out to me is the GF% and how much of an elite even strength player Ronning is. Ronning is someone to keep your eyes on.